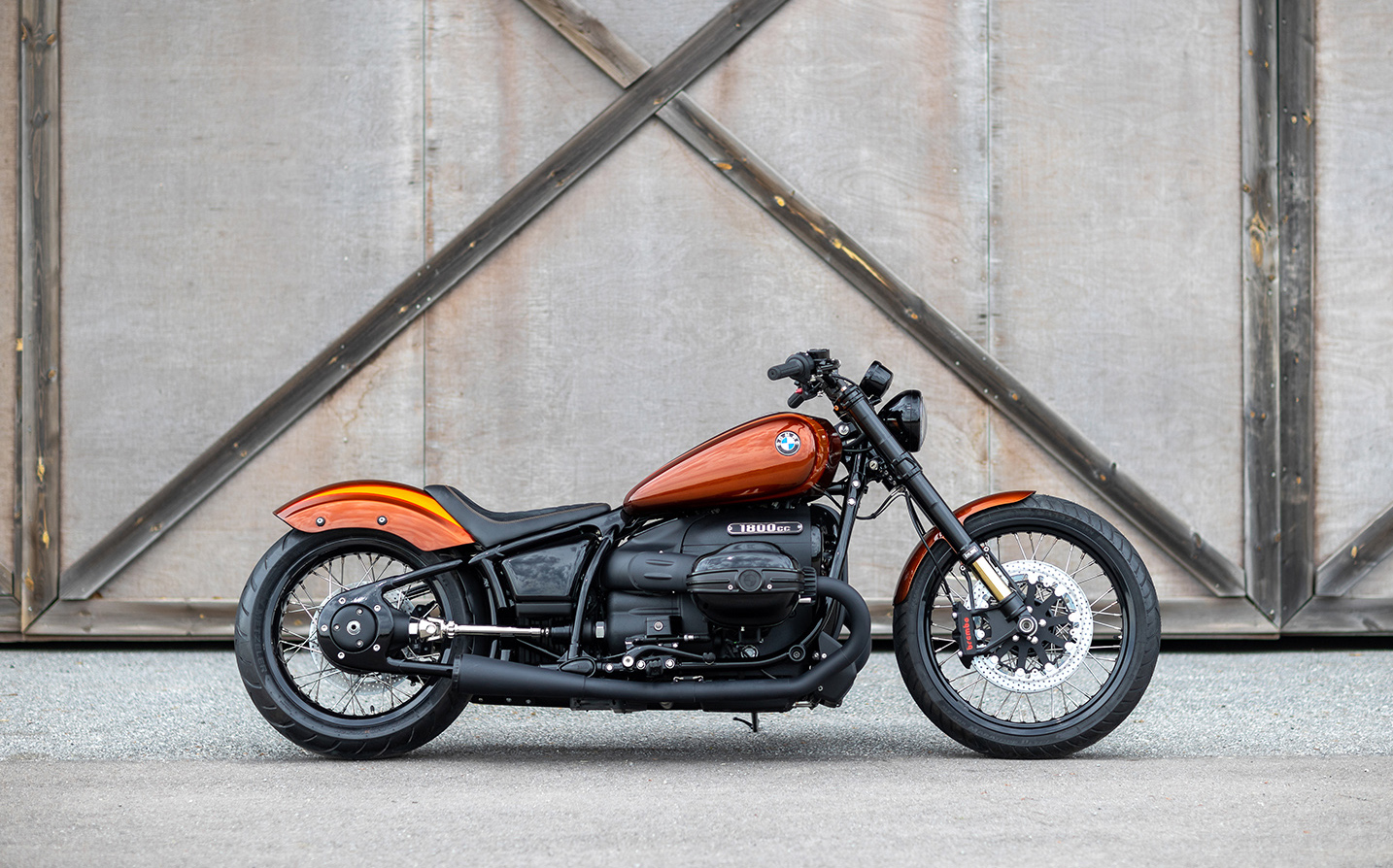 For the first 90 years of its existence, BMW didn’t produce a superbike, then a decade ago the company released the S1000RR, instantly winning most magazines bike of the year and claiming the Superstock 1000 World title by winning every race of the year bar one, where they came second! So, when it was announced by the Bavarian company they were to produce a cruiser called the R18 there was little doubt it would be a success. Now, finally, we think we’ve uncovered how, and the answer is two Swedish twins. They are the very men from Unique Custom Cycles who have built this stunning example of the big BMW that sits before you.

The first inkling we had as a public that BMW might be bringing a new cruiser to life was when they showed off their 80 year anniversary ‘Hommage’ to the original R5. Using an original R5 engine, BMW Motorrad had twin brothers Ronna and Benna Noren use their thirty years of bike-building experience to produce the parts needed to bring the Hommage R5 to life. The bike was a hit when it was shown to the world’s press on the shores of Lake Como five years ago. BMW then cleverly took the silhouette of that Noren crafted bike, combined it with a thumping 1800cc boxer twin-engine, and with their own engineers perfecting it for the road; the R18 was born.

So, given the Noren Brothers’ heavy involvement from the start of the project, it’s no wonder then that BMW has been commissioning them to build concept bikes based on the R18. Their latest is this very machine, designed to be displayed in the showrooms of the Nordic nations as a way to bring in the crowds! Which is exactly what the brothers have always done, first gaining fame in magazines in the ’80s when they introduced their Nordic Style custom bikes to the world. For this build, however, there wouldn’t be one of their custom frames or supercharged engines, more a representation to potential owners of what can be achieved with their own custom R18.

“A motorcycle manufacturer always has to compromise. Manufacturers, even being a premium label like BMW, don’t always do everything the way YOU want it to be. Personalisation is the key to success and happiness,” Ronna says. And part of that Nordic style is going big on the wheels, “Instead of the original 16-inch rear wheel and 19” in front, UCC went for 18” rear and 21” front,” Ronna explains. Instantly the big wheels transform the look of the bike, with the stainless spoked items laced to black rims, delivering an imposing appearance on a motorcycle that is already huge. These are then wrapped in quality Metzeler rubber, that are known to smoke on occasion.

Then the brothers decided that the suspension should come in for an overhaul too and if you’re going to do it, you may as well go for the best. The big inverted Ohlins forks with their gold stanchions look the business. These are held in place by thumping custom machined triple clamps with two inches of rake, to keep the trail within limits. The original brakes are replaced with huge 340mm ISR units with Brembo radial calipers. With the rear still left with its factory fierce 300mm disc and four-piston caliper.

With the big BMW now riding right, the Brothers turned their attention to the looks and with the brief in mind, radical changes weren’t on the cards. So, it was time to get clever and leaving the fuel tank in place, they achieved a more swooping line by modifying the rear mount and lowering the tank at the rear. A slick fender on custom mounts takes care of the front, while “the rear fender was cut and slimmed and the subframe was reworked to fit the flow, as well as the rear suspension changed to an Ohlins damper to get the lower ride height.”

To further accentuate the size of the front wheel and engine, the stock headlight that measures 7-inches was replaced for a smaller 5 3/4” item. Wanting a more low-down custom vibe, Ronna had a simple solution to the big chrome handlebars, make his own! And bent up a set to his liking that then accept the factory switchgear and are finished out with custom grips. The boys then set about giving the bike a sinister side, painting the entire engine in black, with master painter Håkan Lindberg laying down the incredible custom job on the tins.

The deep colours on the big bruising bike make it look like an angry sun coming up over the horizon, with a Viking sitting aboard. To give that Nordic warrior the right place to sit, a saddle was custom made by Silver Machine in Holland. Finally, to release the sound of 1800cc’s worth of ponies, the brother’s own design of exhaust, available from UCC for the R18, was coated black and fitted up to finish out the beast.

The end result is a seriously cool custom cruiser, that takes care of the compromises of the factory creation and then enhances the bike in every way. It’s a level of restraint for the UCC team who are used to building one-off customs but parked in any Scandinavian BMW showroom it gives potential buyers a taste of just how good Nordic Style can be if they purchase their own R18.