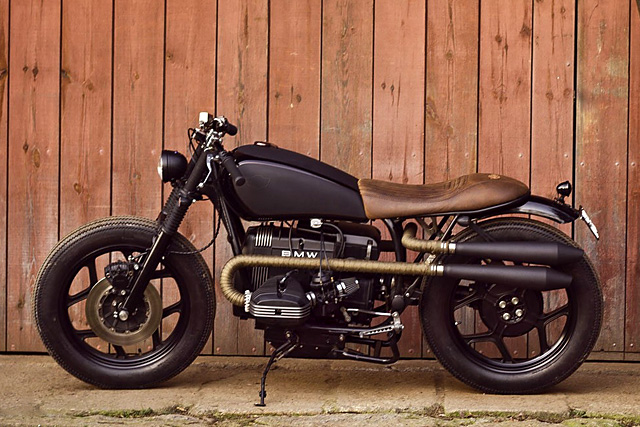 When you’re a Frenchman who desires a German BMW to carve through the streets of London England then who better to turn to than Portugal’s Ton-Up Garage. This cross-continental custom BMW R80 is both a testament to its builders and the great state in which the custom motorcycle scene finds itself. Borders disappear, there are no limits other than your imagination and the skill of your builder; the language of cool customs is universal. Ton-Up’s Daniel and Pedro have proven themselves master builders and their BMW’s are some of the best in the world. Whereas the most recent BMW to roll out of Ton-Up, Recall, maintained many of the styling cues and authenticity of a classic Bavarian, Indira as she is known is built to meet the customer’s request of a dark in colour, low to the ground and built for daily commuting. With suggestions based on past experience Daniel and Pedro were able to convince the customer that too much black would take away from the lines and with all in agreement the final design was completed. Suspension alone won’t give a low sleek look and so the BMW fuel tank was ditched in favour of a parts bin item that would give a more flowing appearance. Finished in a mixture of gloss black and matte black paint work with metallic brown detailing it sets the theme for the entire build. To bring the BMW closer to terra firma the front suspension was rebuilt and lowered using shorter springs that still retain a level of comfort. While the single side-mounted shock is both stunning in appearance and function, but required a reworking of the fixing points to work perfectly. The factory lower shaft drive mounted position remains while the top of the shock swings on a custom bracket mated to tabs welded directly the strongest parts of the frame. All of this was vital as this bike is no show pony; it’s expected to crisscross the mean streets of London on a daily basis. Aiding in rider comfort is one of Ton-Ups one off seats that have become a trademark of the workshop. Two tones of sumptuous brown leather are stitched with craftsman like precision and the Garage’s logo is stamped into the tail piece. The foam itself is shaped in such a way to both neatly fit the customer and also maintain the desired flowing lines. But you can’t just fit a seat like this to a standard frame, so the rear section first had to be entirely removed. A new subframe was built just for this bike and seat combo and once welded to the main frame the entire lot was sprayed in a subtle black chip-resistant coating. Clip-ons for a low bike would have been the easy option, but the swept back bars fitted to Indira give a Brough Superior like elegance while also creating a more comfortable riding position. New levers, grips and twin button switch blocks clean up the front end. While a small headlight, single speedo gauge and even the gators add to the minimalist look and feel of the build. With being street legal a must, small bullet indicators in black feature at both ends of the BMW while a vintage style tail light is mounted to a new rear fender finished in the same gloss black that adorns the tank. Then there are the final details, decisions that expert builders with an eye for detail make and pull the whole project in a single, uniform direction. First are the fitment of vintage Firestone Deluxe tyres whose vertical lines match beautifully to the BMW’s air-cooled fins when you view the bike front on. Finally there are those pipes, custom created headers that snake their way through the frame, neatly dressed in brown heat wrap and finishing with two snarling black reverse cone mufflers. And therein lies the success of Portugal’s own Ton-Up Garage, an ability to take a design brief for a daily ridden low slung BMW and turn it into a show worthy custom machine that collects gazes on the streets and trophies at the show!