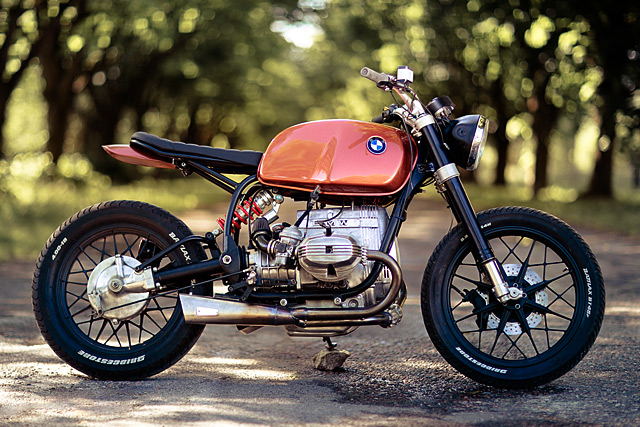 The kids are alright; 26-year-old Sander Ilves from Estonia took a crashed ’84 BMW R80 and created a mean and clean street tracker for his own amusement. The budget? Pretty much zero. The team? Just him. And the shop? Nothing but his cold, Estonian garage. The European winter of 2013 was a cold one in Estonia and if you have to spend time inside it may as well be in your garage rather in front of the TV watching weather forecasts predicting more of the same. So when Sander saw a reasonably priced 1984 BMW R80RT he knew he had to grab it and give him something to toy with in his garage. The bike was bought but the BMW which the Bavarians had literally drowned in box like fairings had been in a decent shunt and the front end was destroyed. So with a plan laid out, a small budget and after hours being the only chance he’d get to work on it Sander set himself the task of building a neat little Tracker, his first ever build. But it had to be stripped down and boxes of old parts torn off and headed for the big motorcycle junk yard in the sky before the real fun could begin.

With the frame on his bench Sander set about bringing it into the 21st century; adding stiff modern suspension to a spaghetti like old frame is an exercise in futility, so the frame has been strengthened and braced for a level of reinforcement that gives the rigidity required for good handling. On the looks side of things out came the grinder and all the unnecessary tabs have been removed and the entire frame carefully smoothed out. Anticipating a major change from the standard two up seating the subframe was completely removed before a new one could be made to size and welded in place. It now supports a slimline single seat in true tracker style with just enough padding to be comfortable. One of the great things about first time builders doing it all themselves at home after work is there are no creative limitations, no years of habits that are hard to toss aside. This is clearly evident in the way Sander went about building the suspension for his BMW, were many follow convention he simply picked the best parts for the job and made it work. Up front the standard BMW forks are really not up to true tracker spec so they’ve been swapped for a lowered set of KTM Supermoto USD items with their beefy clamps giving a much tougher look and increased durability. The standard shaft drive levered rear end has also been given a complete overhaul; where most opt to simply change out the damper Sander has gone for a full mono shock conversion, fabricated the components and used a Yamaha R6 shock and spring to take care of soaking up the bumps and putting the power to the ground The engine was in relatively good condition although 30 years of wear and tear had the Boxer looking less than satisfactory. But rather than blast it or paint it like so many do Sander put in the elbow grease to give it a thorough clean, the raw imperfect metal combined with the unique engine configuration become an instant visual attraction. The air heads were removed, rebuilt and then torqued back down onto new gaskets, always a good idea on an old engine. While most builds of BMW Boxers use the stock headers into twin mufflers Sander continued the theme of doing things a little different by fabricating a set of 2-1 stainless pipes that finish in a raw metal muffler mounted close to the frame. The original Bing carbs were cleaned, rebuilt and now breathe through a set of inward facing K&N filters that along with the exhaust give the build a narrow, compact feel not seen on many BMW’s. With a Boxer ready to rip up the streets and destroy the Estonian backroads the aesthetics are all about staying true to the pure unadulterated simplicity of the build. The tank has been lovingly beaten to restore the clean factory lines before being painted in a copper tone not dissimilar to the hue available on the R80 from the factory. The same colour is applied to the tiny rear fender that is the only other piece of metal work left on the machine. To continue the clean theme the original wiring loom was thrown in the bin and a new one made from scratch. It sends the signals to the well-hidden LED indicators front and rear, the classic headlight with new mount and Sander’s own instrument cluster using a mix of BMW originals and modern LED idiot lights. Working after hours and on the weekends he had free Sander was in no hurry to rush the build, it took just on two years from crashed wreck to feature worthy finish. A total of 300 hours was invested into the BMW with nearly 50 of those spent on google, researching and finding parts. Total outlay was just under €3,500 and when you consider that gets you an asthmatic 250cc learner machine from the show room floor I know what I’d rather have; An Estonian built Boxing Bavarian with just the right fruit to shoot rooster tails towards the sky.