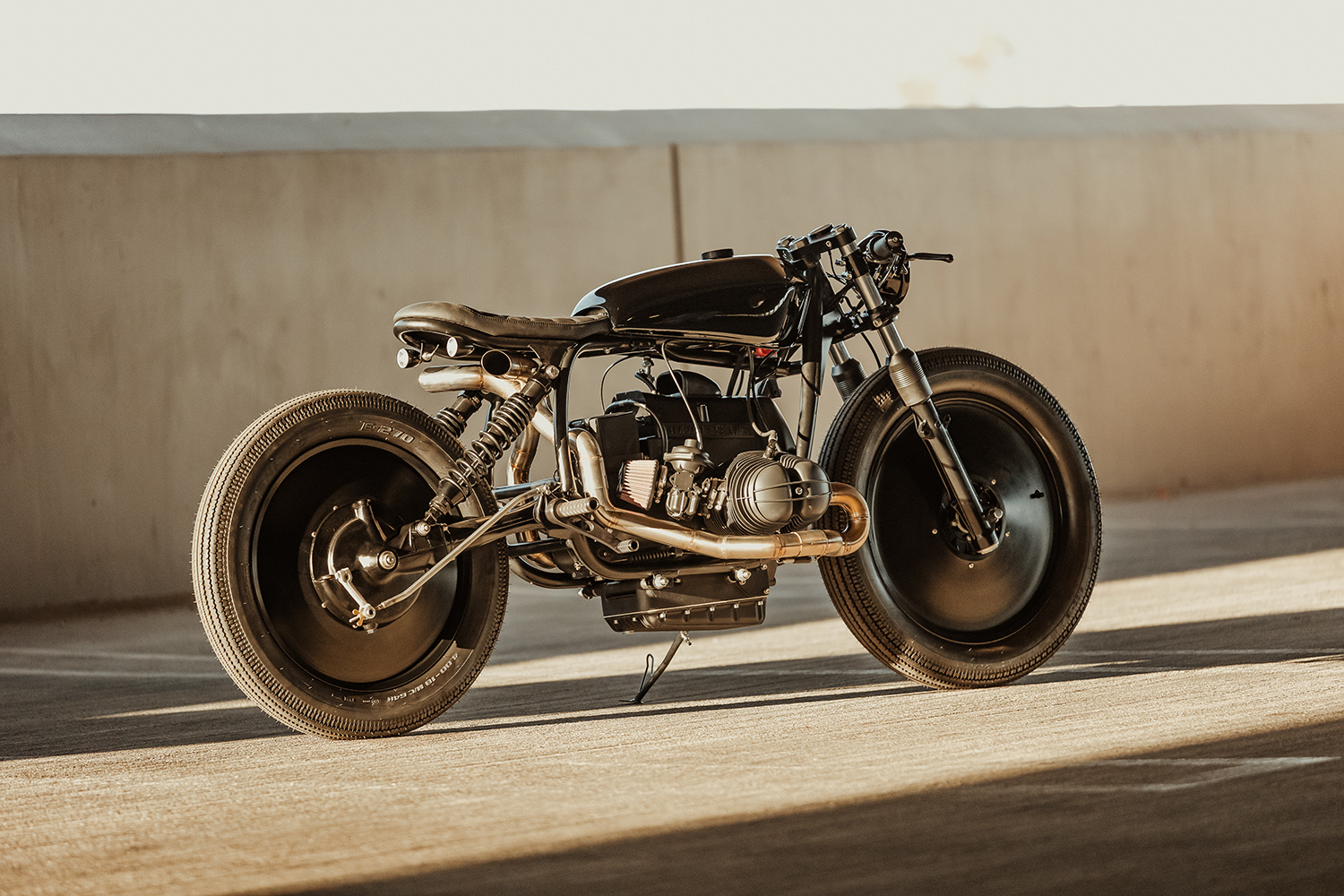 Love him or hate him, Tom Cruise knows how to make a great movie. There seems to be no slowing him down and Top Gun: Maverick is now his highest-grossing box office success. And for the second time in the same week, that film has inspired a custom bike, with this once abandoned and aimless BMW being infused with the spirit of one of the movie’s most incredible machines. Arriving at Arizona’s team of builders at WYLD Garage Co, the BMW wasn’t much more than a frame and a box of bits until the guys saw the movie’s trailer. With the sight of the mythical SR-72 Darkstar racing in their minds, they set about transforming the once unloved 1976 R90/6 into a stealthy sensation.

“The bike came to us in a package deal from Colorado. It was missing an entire wiring harness front to back, its fuel tank, no rear subframe, pegs/controls, and a number of other smaller parts. We instantly knew it was going to be a great platform for something fun and different.” A bike in such a state liberates a builder from any guilt about hacking up a classic and allows the mind to truly run wild with ideas. They knew they’d like to experiment with moon discs, but there wasn’t yet a guiding design influence. So, for a while, the bike sat amongst the killer customs in the shop and the basics were done.

Then, “we (Nathan and Justin) rallied on inspiration for a theme. Having recently seen a trailer for the new Top Gun, we both jumped on the thought of using the movie’s mythical SR-72 Darkstar as the overall theme. With the already sleek Moon Wheels adding to the overall stealthiness, the rest began to take shape. Ultimately coined the WYLD DarkStar!” And those wheels certainly make their presence felt, built on a set of reconditioned rims with all new spokes. To mount the aluminium discs themselves, the guys tapped M5 threads into the hubs, so that should they ever come off or the owner wishes for a change, there will be no ugly welds to deal with.

Their smooth shape and profile up to the Shinko E-270s, along with the matte black finish help to set the stealthy tone. And the fork legs, swingarm, and hubs have all been finished in the same hue so they flow almost seamlessly. But the stock and distinctive BMW tank just doesn’t give off that vibe, you’d spot its shape from a mile away. The solution comes in the form of something much more subtle and with less mass, a Honda CG125 tank with a RedKote liner and billet cap, that adds a little extra class to the gloss black paintwork.

Given the bike had come sans subframe, it was the perfect excuse to make one just for the project and it’s the work you can’t see that really sets it apart. Beautifully welded in tabs to mount the seat and the back of the tank are hidden away, while the top section provides for a neat hooped appearance, and a set of new upper shock mounts also form part of the piece. The seat itself was hand shaped and then upholstered in high-quality leather that carries through to the wrapped grips on the inverted clip-on bars. That unique look is further set off by a vintage Bates headlight case that’s filled with an LED light.

To get it to mount tighter to the front end, the bracket has been welded to the lower triple clamp, while the upper clamp is a custom machined unit that also accepts the Motogadget speedo. Through these are dropped the standard forks, but there is nothing stock about them on the inside with a Racetech spring set and an internal lowering that drops the bike 2.5inchs closer to the ground.

The rear of the bike gets fitted out with blacked-out adjustable shocks and “the brakes remain factory with new shoes for the caboose and the ATE single disc in the front as well as custom brake lines.” The shift linkage and rear brake rod are neat custom touches, clear coated to preserve the raw look.

Part of keeping that stealth look meant pulling the entire drive train from the bike and giving the whole thing a coat of black paint. The final drive is rebuilt, and the engine gets the works burger with new pistons, rings, seals, and gaskets. “The stainless 1.75” exhaust runs from the heads back. When we built the ‘X’ pattern muffler under the seat, we created a slip joint where it attaches at the lower part of the frame and a removable hanger so if that muffler for some reason didn’t appeal to its new owner, it wouldn’t be difficult to remove and rebuild a different style muffler.” As for cog swapping, the boys selected Cognito Moto billet foot controls and reinforced the mounting points.

A full rewire is employed to help keep things neat, and under tank modifications were made to fit the m.unit, harness, and the coil pack. A set of Kellerman Halo lights project rearward from under the seat and the buttons are more magic from the Motogadget catalogue. The charging system has been upgraded to the latest and greatest gear, and the battery hides in its own leather case.

Like anything the guys at the Arizona garage build, every last part is high quality, and nothing looks out of place. The WYLD DarkStar was revealed to the world as the movie hit cinemas, and now if you want to own this 1 of 1 machine, hit the boys up before Mr. Cruise adds another bike to his collection.