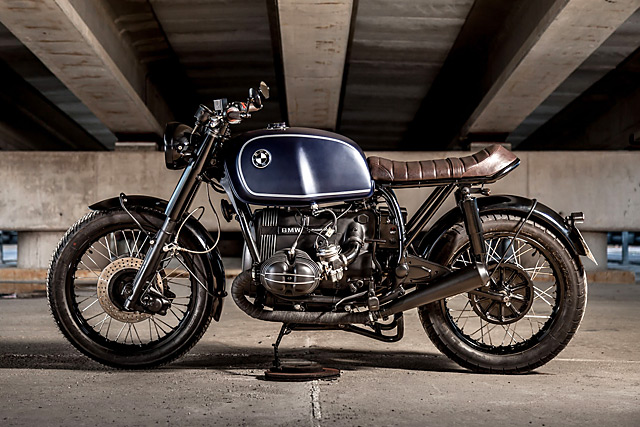 I once worked at a company that was going through some major restructuring. Turning up to work one morning, we found copies of a book entitled “Who Moved My Cheese?” placed on our desks. A quick thumb through its pages revealed it to be a rather patronising little ditty that had been handed out by management to ‘prepare us for change’. Its intended message was simple; companies (and their employees) that are quicker to accept change stay ahead of the competition. Or, as the book puts it, “The Quicker You Let Go Of Old Cheese, The Sooner You Can Enjoy New Cheese”. All we took out of the experience was that management saw us as rodents. Bastards. But it’s not entirely without merit. Stay doing one thing for too long and you just might find yourself ‘without cheese’. It’s a thought that Spain’s Macco Motors took to heart after a string of rather nice Triumph builds. The result? Their first ever BMW. “This bike started life as a ‘74 BMW R90/6,” say Jose and Tito, Macco’s big cheeses. “We heard lots of stories about her history before we laid down the cash. Basically, she was in a really bad way and wasn’t complete. Not even close.” And the engine? “It was worse than we had expected. So with an R90/6 frame and wheels, we decided to swap the engine with a 90’s unit. Luckily, we had a decent R80R engine at the workshop, so everything worked out perfectly.” The boys started to work on the bike and then they received a rather serendipitous phone call from Madrid. ‘Fernando’ wanted a BMW. Perfect. “The customer came to us with a strong, clear idea; he just wanted a really classic look. And that’s what we did with this bike, or the “Big Fish” as we named it. Two things were immediately flagged as important for the success of the build; lowering the bike, and building a new subframe.” On the ‘bars, the boys changed the bike’s controls for tiny enduro lights and switch controls. Then they mounted a fresh Renthal bar with some 22mm Tomaselli brown grips that matched the seat’s new leather colour and completed the look with a set of LSL bar-end mirrors. “And for the forks, we adapted a couple of Harley Davidson front covers to suit. The headlight is a new 7″ unit, and fibreglass front and rear mudguards were specifically requested by Fernando.” At the rear, the new subframe was cut, bent and welded with Macco’s usual expert touch. A new seat in dark brown leather and a pair of Hagon Classic shocks were then added. A bespoke battery box allowed the bike to swallow the new (and tiny) Ballistic lithium battery along with the rest of the bike’s electrical spaghetti. The exhausts are Spark units which were adapted to the pipes and painted black. “We combined satin, matt and glossy black on the bike with the dark blue on the fuel tank and the chocolate-brown seat,” says Jose. All up, we reckon it’s yet another great bike in a long line of great bikes by the boys from Cádiz, and a unexpected (yet welcome) change-up from their solid track record with Triumphs. Who moved my cheese? Screw that. Queso for everyone!