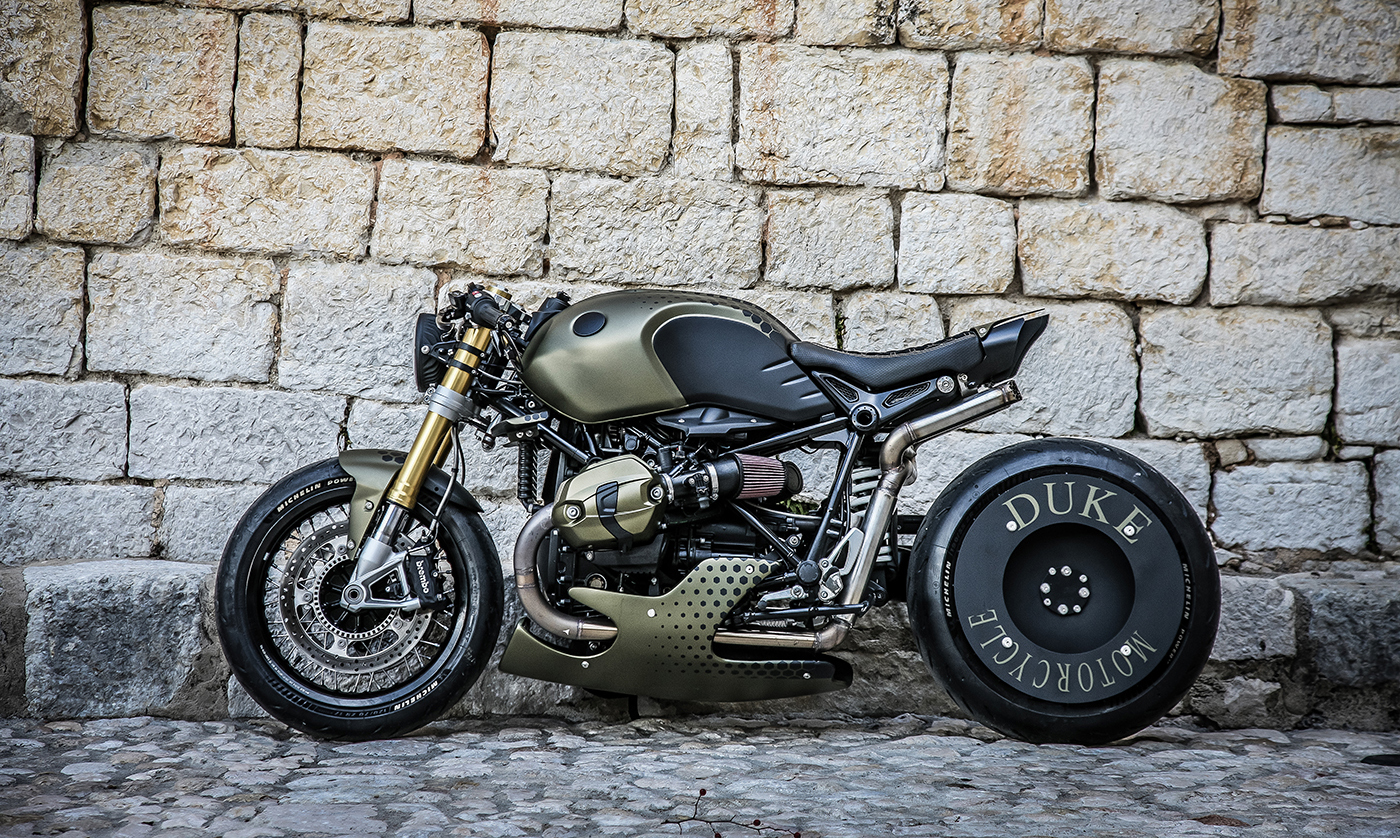 They are the apex predator of the automotive world and few pieces of machinery elicit such unbridled passion, lust and desire as the supercar. If you were a kid in the ’80s with any interest at all in cars or bikes, you had a Countach poster on your bedroom wall. And while very few of us will ever actually own one, their significance is as much about automotive design, inspiration and challenging convention, as it is real-world ownership. Similarly, Frenchman Lionel Augier has always been willing to test boundaries, sail past norms and let his imagination come alive in his incredible custom creations. Now, inspired by his love of a Lambo, the Duke Motorcycles man has built a BMW R nineT and infused it with all of the best bits of the Italian’s outrageous invention.

We’ve featured plenty of Lionel’s bikes over the years and watched his career go to all-new heights, but the authenticity of the man has simply never changed. From his artisan workshop perched up in the mountains above the glamour of the French Riviera, he draws inspiration from all manner of the world’s most beautiful things and then lets his talented hands bring each bike to life. In recent times he’s been working a lot with the BMW R18 platform, building bikes for factory dealers, coming second in the R18 Custom Contest and crafting parts that people can bolt onto their own bad-boy Bavarian cruiser.

So to change things up and try a different model, he picked up a 2017 R nineT, “I created this plug-and-play kit for nineT inspired by my passion for supercars, here it is the Lamborghini Aventador, to give an ultra-aggressive air to this BMW,” he smiles. The Aventador is as menacing and as uncompromisingly cool as any Lambo before it, but with it being the last model to use the company’s famous naturally aspirated V-12 engine and truly exit the analogue era, for Lionel it was a chance to pay tribute to all that makes these cars so incredible. And having built so many one-off machines, this bike serves as the basis for a new kit for those with a nineT who want a supercar special of their own.

The bodywork forms the basis for the kit, with the rear section playing a huge role in turning the tame tail into a fearsome beast. The subframe has had all of the factory extras removed, but nothing that can’t be done with a socket set. Then over this, the cowl itself is hand shaped from aluminium to an aggressive final point.

Under neath and the simulated aero comes into play with more hand-formed aluminium serving as a diffuser. At the opposite end of the bike, a new front fender was selected to work with the factory mounts, and then custom shaped to achieve the same aggressive appearance.

To tie the two ends together and ensure that the unique boxer twin engine became part of the experience meant the underside of the bike needed just as much drama as the rest. To achieve this Lionel has formed a wicked belly pan, that has both a smooth style and some attacking edges. It is just a handful of components but the new attitude transforms the BMW from a docile pet into a rampaging bull.

The geometric shapes used as part of the paint scheme add an extra dimension and help to accentuate the already aggressive lines. To take that look another step further, the seat needed to match and the finished product is simply a work of art.

Using a combination of black Alcantara and leather, a soft gold stitch has been used to complement the colour and pick up the same forms as were applied in the paint. One final touch of supercar excess? How about a turbofan rear wheel, with an aluminium hub adapter perfectly balanced to make it all work.

Of course, all this drama needs the right soundtrack and to make that a reality Lionel pulled out his sketchbook and started to design the exhaust. It had to integrate into the look as well as elicit an aggressive sound, and the full stainless steel system with slash cut shotgun style mufflers does exactly that, with flames ready to spit from the screened-off ends. To improve the breathing a set of K&N air filters were fitted and the battery was moved to keep things looking tidy. Finally, to make the most of the changes, the engine was given a full tune and a quickshifter was added for lighting fast gear changes.

The clean components continue and allow the focus to remain on the overall look, with a machined upper triple incorporating the mount for the Motogadget speedo. The handlebars are by Bonamici and have been kitted out with Beringer brake and clutch master cylinders, and the bar end mirrors are the ultra-funky mo.view units.

The final product is simply wild, but what is just as impressive is that with no cuts or hacking of any components, this custom straight out of Need for Speed, can easily be converted back to stock. The kits are currently for sale, either to ship or have fitted in-store and if you love what you see, then for the right price Lionel will part with this particular outrageous Aventador Autobot.