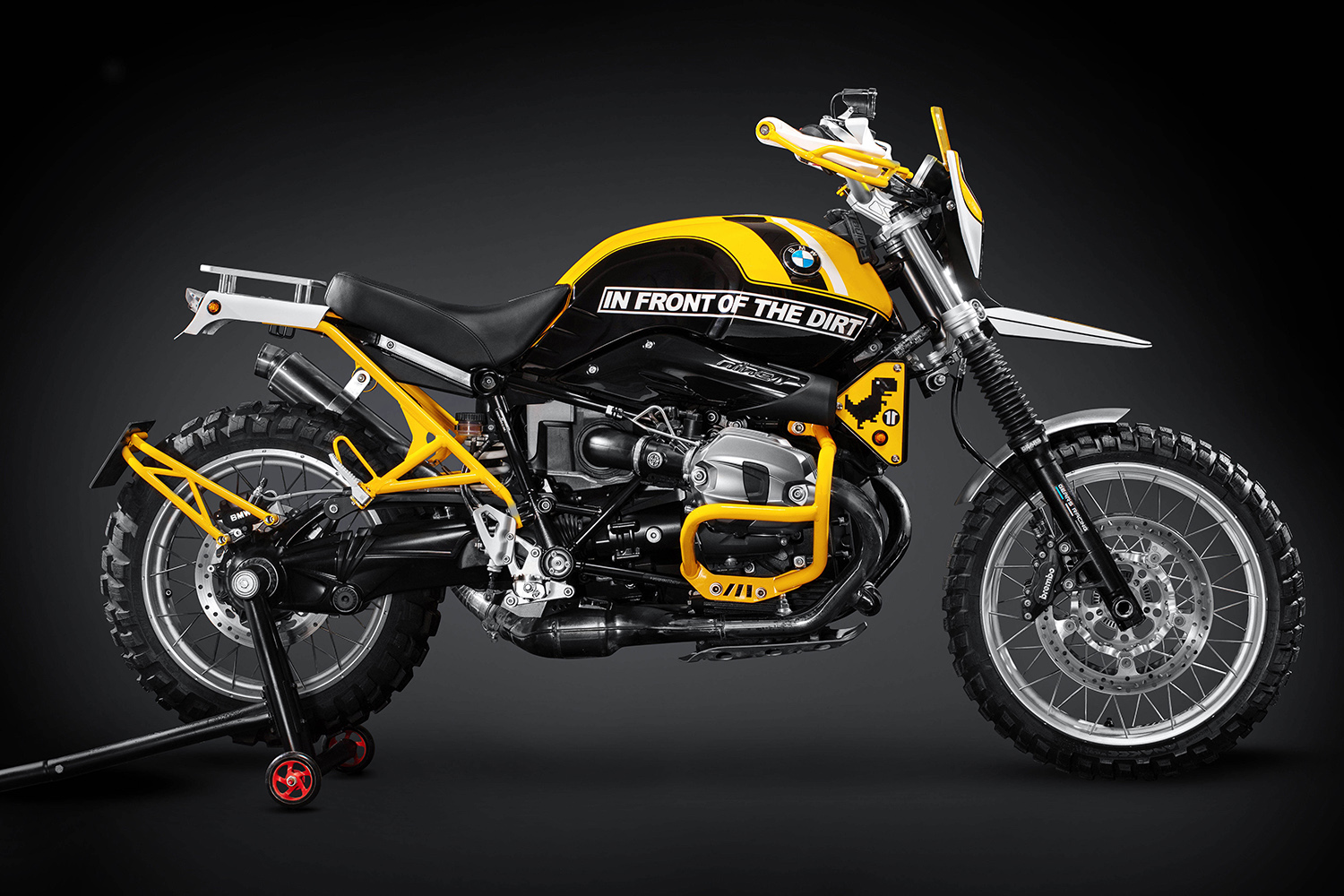 The R nineT has been an enormous success for BMW Motorrad, not only giving them a huge entry into the modern retro market but also introducing a whole new generation of riders to the Bavarian brand. Looking across the range there is seemingly a bike for everyone who wants to enjoy the Boxer-twin beat, unless of course you want to do a little more off-road work on your two-wheels and don’t want to deal with the big weight and price of the traditional GS Adventure range. So to get exactly what he was after, a client took his R nineT Pure over to the team at Mandrill Garage, who have delivered an epic dirt destroyer and even given the bike a fitting dinosaur twist.

The Beijing-based garage has been turning out amazing customs machines for years now, and this challenge was one they were eager to take on. Known as ‘In Front Of The Dirt’, the bike is designed to do exactly as the name suggests, rip up the off-road and leave a trail of dust in its wake, making light work of whatever rough roads are thrown at it. So why the dinosaur influence, the owner is clearly a man of adventure and works at the incredible Jurassic World at Universal Studios in Beijing. So, it’s easy to see how his dreams could have him needing just the right bike to escape the life-like animatronic beasts.

The Pure version of the nineT makes perfect sense for a bike that is going to be given a total overhaul, why pay for a bunch of extra bits and gadgets you’re only going to dispose of. So, with the blank canvas up on one of the garage’s many lifts, the team led by Luo Hao swung into action. The modular design of the BMW right out of the box is one of the things that makes it a customisers dream, and immediatelty the team had the rear subframe off for modification. A set of gussets are added for extra strength, one of which is to support the mount for the new exhaust, and the rear is extended.

This allows for a super neat aluminium luggage rack to be added, with the same alloy used to wall off the sides to close it all in for a neat appearance. Still at the back of the bike, a number plate holder is fab’d in the same trellis look and is an ultra clean alternative to hanging the all important government plate of approval from under the seat. The beefy metal vibe continues further forward on the BMW, with both the engine and the rider’s hands now safe from any obstacles out on adventure, with big guards in front of them all, and a bash plate for the engine.

The front fender however goes in the opposite direction, slimmed down and lightweight to get the job down and remove some factory kilos. But it’s not left on its own, with a second high-mounted fender in a squared off design hanging from under the lower yoke. This begins a part of the visual transformation, with the yellow tinted screen and front cowl giving the BMW a totally unique face. “The headlights provided by Baja Designs are for the Husqvarna Enduro model, plus two S1 spotlights,” Lou explains.

But it’s the colour that really captures your eye, vast and generous amounts of bright yellow on all of the new metalwork allows every touch to stand out. With the custom radiator covers sporting the colour and a very appropriate T-Rex logo. With the rest of the bike a mix of solid white and black, broken up by more of the bright hue across the tank and making for a bike that not only catches the eye but does so with a sense of purpose. Nowhere is this seen more than the dead front on view, as the bark busters atop the crosser bars, with the extra metal protection, all ready for action.

To get the bike prepared for that extra exertion on the dirt, it was put through its paces and where it was found to be lacking the most was in the suspension. This is true of almost all production bikes that are not dedicated off-roaders and the only solution was a total transformation. Lou did the maths and then had Gears Racing factor in the rider’s weight, building a new set of forks, springs, and components that not only can handle the extreme forces sent through them, but also offer 10cm of extra travel, for more of that go anywhere goodness.

The wheels too simply weren’t up to the job, so custom lightweight hubs were CNC machined and they are laced up with new spokes to a set of rims that allow for tubeless tyres. Those boots leave no doubt about the owner’s intentions, Michelin Anakee Wild tyres use the company’s Dakar winning technology to be able to hold together no matter how hard the task. The final touches for the build were added to the engine, with some extra protection added around the intake and a lightweight titanium exhaust extracting some more grunt.

Now, one very happy Jurassic World employee has a way to spend his downtime, and Mandrill Garage has ensured that he really has the T-Rex of the R nineT world.