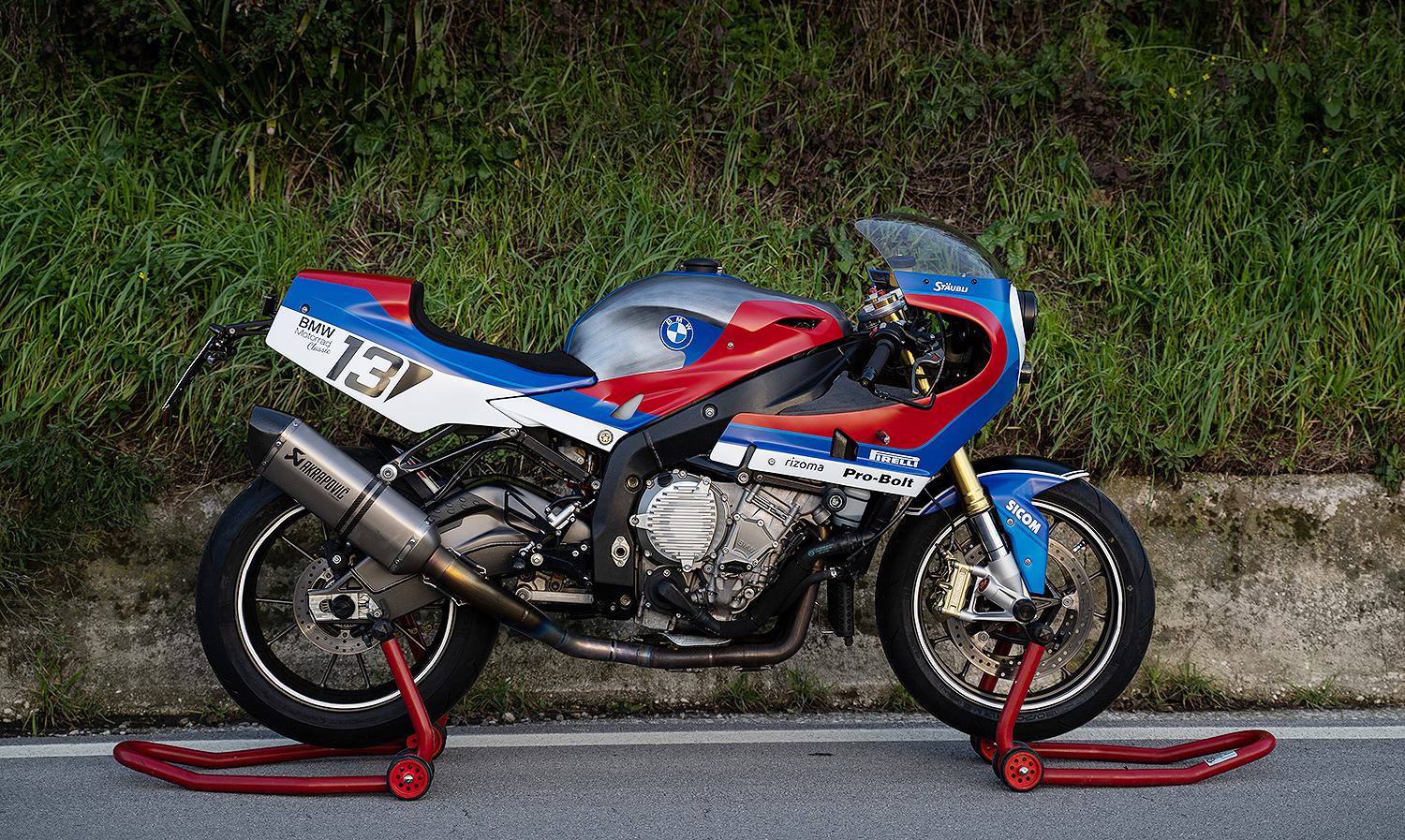 To be good at this craft, you have to know exactly how to use the machinery to create the perfect foundation, then the product not only has to perform exactly as desired, but the visual aspect also needs to elicit just as big a smile. Thrown in an amazing customer service experience and the life of the barista is not that far removed from a custom bike builder. And lucky for us, Italy’s Nicola Giannattasio turns out to be as good at working with the beans as he is spinning the spanners on a Beemer. But the coffee creator with a big social media following has always kept his bike builds to himself. That is until today, as we reveal his barnstorming BMW S1000RR that’s been poured and pressed into a stunning ’80s Endurance racer for the roads.

Not only does Nicola make an amazing Espresso, but he also shakes up a mean cocktail and is known around the region of Campania for his ability to tell a good joke and keep his customers entertained as he delivers up their favourite drink. What most don’t know, however, is that he not only has a great love for motorcycles but along with his best friend, he’s been building some wicked bikes in his spare time as a way to relax. With word of mouth and social media ensuring that his day job is high profile, he’s kept his bike building offline and ensured that his passion wasn’t subjected to the same level of judgement he’s used to at his 9-5.

But great things can’t stay hidden forever, so Nicola decided it was time to share with us exactly what he gets up to in his downtime. A big fan of endurance racing from the ’80s, he took great inspiration from French custom house Praëm who combined the best of the period with a modern BMW superbike. On the hunt for a donor of his own, he found just the right bike in the form of a 2011 BMW S1000RR. Built to go racing, the homologation of the RR has ended up proving an enormous sales success for BMW, with the bike proving to be the best sport bike for the street over the following decade.

Nicola didn’t want to mess with what makes the bike so great, what he did want to do was totally transform the look and that started with removing all of the bike’s bodywork. With this done he set about building an entirely new subframe for both the front and the rear that would support the new panels to come. In doing this he also ensured that the new metalwork could hold up to the blistering speeds the BMW is capable of, this is not an old ’70s small-capacity commuter machine! With that done he knew the exact front fairing he wanted to use, that from a GS1000R made famous by the racing team of Pops Yoshimura.

The back end is taken from the next bike that Pops unleashed on the world, a tail section from the legendary Suzuki XR69. For Nicola using these parts helped to infuse into his bike the history of the sport and the legends whose genius make it so great. But that just wouldn’t work for the tank and here he’d have to be his own innovator. Starting with a factory BMW tank cover, he crafted his own version that not only hides the fuel cell below but is extended with custom side panels to integrate the design into the XR tail.

A Monza style cap was taken from a BMW R nineT to help capture the classic vibe, and the seat is as racy as it gets, a thin piece of foam, just like you might see at the Bol d’Or. With a fibreglass front guard added and a hugger over the rear, it was time to pick the colour scheme. Sticking with the ’80s styling, the BMW Motorrad classic colours have been applied in a matte finish to simulate the acrylic look of the time, before paint finishes on race bikes were so glossy you’d slide off them. The single headlight with race tape takes things to the next level and a few sponsor decals finish off the style.

With the best part of 200bhp on tap, the engine didn’t need to be cracked open for more, but the look has been given a classic makeover, with a set of custom covers that Nicola designed and had machined from aeronautical grade aluminium so they serve as excellent crash protection too. Of course, who can say no to just a few extra ponies and a brilliant sound, all of which is delivered by the full Akrapovic titanium exhaust, which along with the custom carbon air shroud also has the benefit of reducing the bike’s weight.

Building the bike for the street, Nicola needed a place to hang the license plate and found a support from a modern Kawasaki Z1000 that worked a treat. The taillight is a clever piece of repurposing, with the factory item stripped down to just its raw elements and the control box hidden under the seat. The mighty BMW HP4 provides its levers and rearsets to add a real touch of German quality to the controls and the Barracuda and Rizoma catalogues were raided for a bunch of odds and ends.

So, after a tough shift of cappuccino creation, Nicola has this beautiful bike to head home on in blistering style. But now that he’s finally unveiled his hidden talent to the world, this machine known as ‘Nurburg’ is for sale, so that this multitalented man can finance his next mechanical marvel.