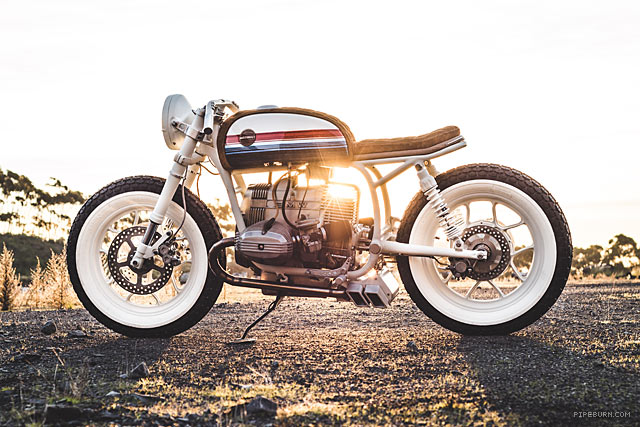 Ever thought about why you like bikes? I have. And I’ve come to the conclusion that for me, the BMX craze of the late 70s and early 80s probably has a lot to do with it. As we all know, cool bicycles are a gateway drug to full motos and as I’m ‘of a certain age’, most of my pre-teens was spent drooling over CroMoly Diamondbacks and Mongooses. Jeremy from Hutchbilt knows what I’m talking about, even if you young scallywags don’t. Here’s his BMX-lovin’ ‘Skyway’ R80 Boardracer. The project started when Jeremy’s friend Charlie McFall and his dad Nick came to him with a lazy ‘79 BMW R80 from their personal collection. After a once-over, Jeremy saw that it was a really good, fully functional donor bike which the pair were happy to let him loose on. Initially, he was only planning a few minor styling and performance adjustments, “But in the back of my mind, I knew that wasn’t going to happen”, he laughs. And we’re damn glad it didn’t, too. “We’ve all seen customised BMW airheads, but to me they were starting to look a little clichéd”, says Jezza. “Not being one to conform, I wanted to create something totally different”. Charlie & Nick had the faith in him to come up with something really unique, so he set about designing and building what would eventually become the Hutchbilt ‘Skyway’ R80 Boardracer.

“Early boardtrackers, California culture and the iconic ‘Skyway’ freestyle BMX bike of the early 80’s with its white plastic Tuff Mags; these all played a huge roll in my inspiration for this build”.

As you can probably tell, he started with the stance. “The bike was upgraded to a Yamaha R6 front end, which was fully rebuilt and lowered by 35mm. Then I added some custom 3CR12 brake rotors designed to sit perfectly inside the R65 mag cut-outs, along with some custom rear shocks that are both progressive and adjustable”. Salvaging a crazy big headlight from one of his engineers, Jeremy repurposed it to fit the Motogadget keyless ignition and anti-aircraft grade headlight. “I wanted the ‘bars to be super clean with no levers or cables, so for this I turned to my long time friend Alex Stoos. We used the Exile Cycles ‘twist’ clutch and throttle assembly on billet knurled grips to create this”. The clutch cable runs through the frame to a twin pulley system. Alongside, a ludicrous amount of Motogadget’s finest makes sure nothing but a digital display and a few buttons occupy the ‘bars. “I’m not big on visible wiring and cables, so I chased pretty much everything into the frame”. The graphics came from a Mexican blanket stance sock Jeremy had which he gave to his painter. Now, there’s a sentence you don’t read every day. “It’s my interpretation of the BMW racing colours. The tank emblem was CNC’d out of walnut and the custom billet gas cap is a one-off by Black Silver”.

The rear subframe was first built and then rebuilt once Jeremy had the new seat pan, base and suspension idea sorted out in his head. The custom walnut base was hand laminated by a furniture designer friend and then CNC’d to fit the subframe and to house the recessed  LED lights.

“Then the seat and tank cover was handmade in Napa suede with hexagonal stitching by Eric Groenewald using earth magnets and elastic side seams to hug the profile of the tank and flow cleanly into the seat’s front”. Because I wanted clean bars, we had to come up with a braking system that would operate the front and rear simultaneously from the brake pedal. We built a mechanism that turned downwards pressure into a rear force to operate the master cylinders and create a safe amount of braking. At first I found that we were getting hardly any stopping at all. Turns out, the pivot point was too high and after some genius calculations by my friend Chris Clokie, we dropped it and got the exact force we needed”. While he was at it, Jezza also managed to turn the rear drum brake into a disk, complete with braided brake hoses mounted inside the frame.

[superquote]“Because I wanted clean bars, we had to come up with a braking system that would operate the front and rear simultaneously from the brake pedal”.[/superquote]

For a beautiful alternative to the original airbox cover,  a new ‘cage’ unit was CNC’d with the same spacing as all the other linear accents and fins on the bike. “I wanted to emulate these lines in 6mm billet wafers like the rest of the motor”. Each wafer was individually laser cut, shaped and tapered.

“I wanted it to hug the motor and top cover. To achieve this, I had to hand-shape each one to fit accordingly. There were many points that I thought perhaps I’d bitten off a bit more than I could chew, but I persevered amidst a whole lot of fucketry. It was such a feat of engineering and bloodshed, I named it ‘The Mayan Temple’. It houses the Motogadget M-Unit, an Antigravity battery and all the electronics”.

[superquote]“It was such a feat of engineering and bloodshed, I named it The Mayan Temple”.[/superquote] Jezza wanted the BMW’s collector to flow with the frame and the rest of the Beemer’s boxy engine, but to also look like the fire-breathing exhaust tips of the legendary Supermarine Spitfire. So to create the look he wanted, each piece was CNC’d out of a solid block of aluminium.

“In the final stages of the build, I had to create some more space in the rear swingarm to fit the 120/18 Beck Whitewalls which sit on BMW R65 18″ wheels. I also vapour blasted the original Bing carbs and updated all the internals. The Bings get to breathe better through Uni air filters with Aigner fuel taps and some custom CNC’d choke buttons”.

What really get’s you is the insane amounts of detail Jeremy has built into the bike. We’ve been staring at the shots for days and we’re still finding things we hadn’t noticed before. But what is it like to ride? “It’s great,” says Jeremy. “The rideability and ergonomics of the Skyway, coupled with the performance enhancements and a very torquey BMW motor make this bike super smooth and really fun on the road”.