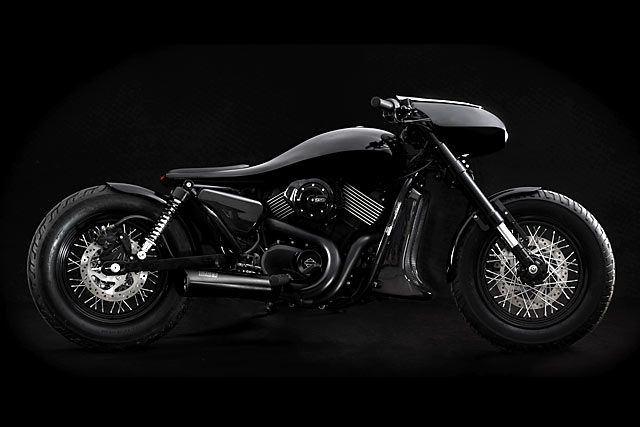 After a one year hiatus the good folk at Bandit9 have returned to the custom scene with a bang. This time around they’re leading with this incredible Harley Davidson 750 Street, dubbed ‘The Dark Side’. First up, it’s not named after Star Wars – the team actually drew their inspiration from the dark side of the moon. But I can’t help but see more than a little Vader in the lines of this remarkable build.

A long, long time ago in a workshop far, far away Bandit9 had a bit of momentum going. They were selling nine iterations of each custom they were producing, they were moving them on easily and getting plenty of coverage in the media. The decision to shut down temporarily due to personal reasons wasn’t an easy one. But starting up again was also difficult. ‘It was frightening and refreshing to start anew,’ Dylan, head of Bandit9, says. ‘I assembled a new team to up our craftsmanship and decided to focus on offering only 3 models.’ And those customs aren’t like typical custom builds offered by workshops, built to a spec laid out by clients. Their vision is entirely their own. ‘We always start from zero,’ Daryl explains, ‘This gives us the freedom to do what we want and the space to bend the rules.’ The second iteration of Bandit9 also has the shop shipping their finished products to clients around the world. And this time they’ve gone with a larger bike than they’ve tackled before – and their first Harley Davidson. ‘The Street 750 isn’t the most popular Harley Davidson,’ Daryl admits. ‘But what it does have is a superb engine and that’s what we wanted. I’ve personally ridden and owned a variety of Harleys, but the Revolution X engine is far more responsive and feels a lot quicker and more agile than the others.’

[superquote]“What it does have is a superb engine and that’s what we wanted”.[/superquote] But in stock trim the Street 750, with it’s exposed loom and patchy fit and finish looks nothing like this. And getting it to such a standard was quite the journey. The first step was redoing the frame. The neck was extended and angled forwards while at the rear the subframe was trimmed and the swingarm lengthened to accommodate a larger rear wheel. The ride height was lowered with the shocks, 16” rims and USD forks. [superquote]“How we do it is a bit of a secret but it is completely hammered by hand”.[/superquote]

But the real beauty is in the bodywork that ties the whole bike together. And that was also the hardest thing to do, as Daryl explains. ‘The trickiest part was the unibody that unifies the tank, seat, rear brake lights and signals into one form. And we had to find a way to get the bulbous front to taper smoothly into a square back. How we do it is a bit of a secret but it is completely hammered by hand.’ And It’s done impeccably – with the gloss black paint sure to show up any imperfections in the work. Possibly the neatest part about the build is the slimline cowl, outfitted with a LED headlight that, although small, puts out a beam around 150% stronger than stock. The fenders are handmade as is the radiator cover and the Han-stitched Solo seat. Topping it off are Vance and Hines exhausts and a conversion to chain drive. The team is understandably ecstatic with how The Dark Side turned out. ‘We love it’s presence,’ Daryl says. ‘It’s hard to put into words and hard to portray in photos. It’s understated but has charisma – and it’s intimidating at the same time.’ I’ve got a funny feeling that with Bandit9’s new business model they’ll be one to watch. They’ve always done an incredible job of turning smaller displacement bikes into rolling pieces of art but it’s great to see them tackle something with a larger displacement. If you get the chance there’s there’s also video of the bike in action below. At one point you can even see the rider shift all the way through the gearbox and use the fourth.