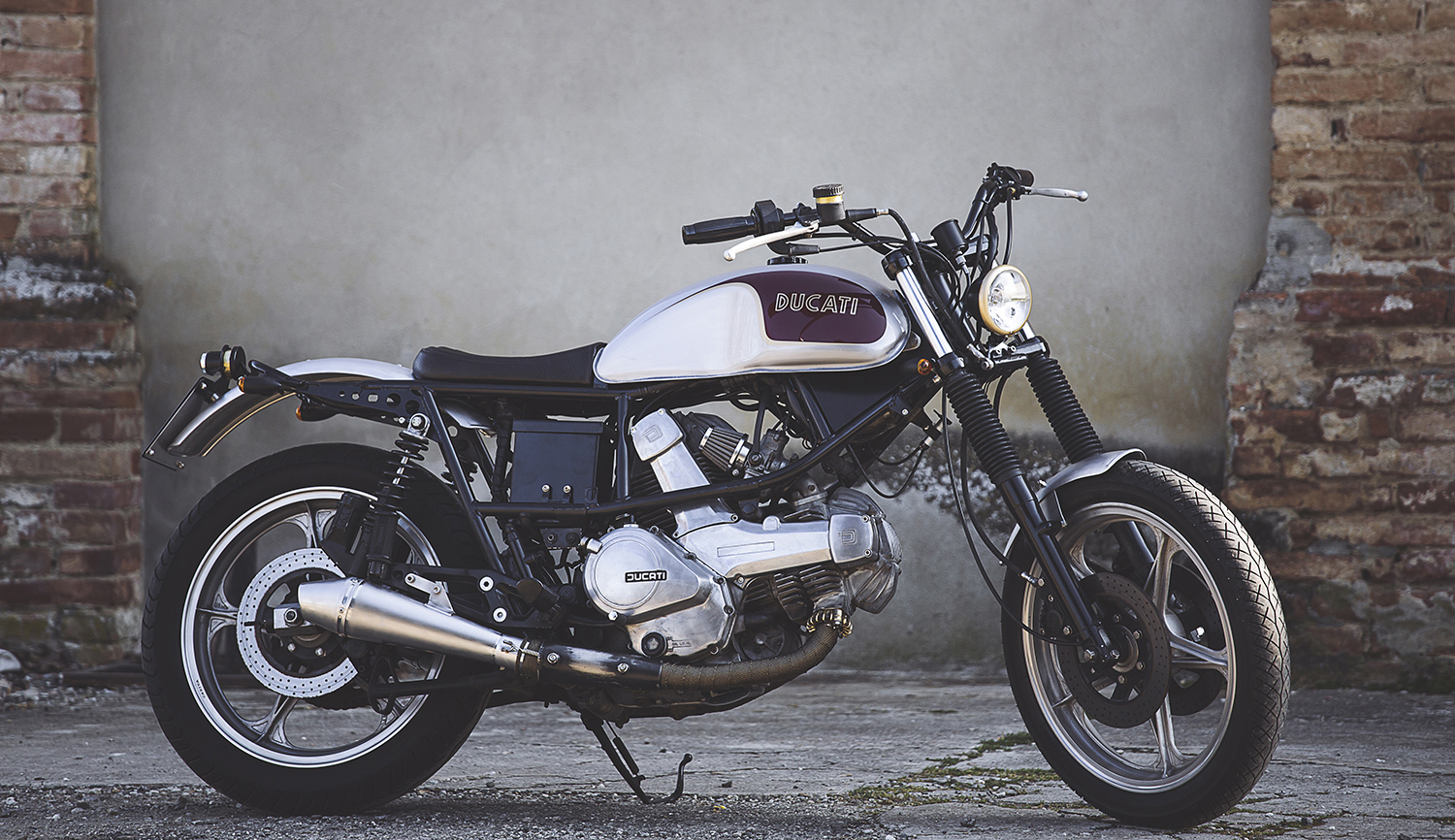 Few motorcycle manufacturers have come out of the blocks swinging like Italian marque Cagiva, selling 40,000 units in just their second year. By the end of the ’90s they owned Ducati, Moto Morini, MV Agusta and Husqvarna. They also had teams across the Grand Prix paddock and the GP500 of John Kocinski is arguably the most beautiful race bike ever built. Then as quickly as it started it all fell apart, leaving the left behind road bikes as rather undesirable things. So with just such a bike, an owner of a 1985 Cagiva Alazzurra, sort out Italy’s Nico Dragoni Motociclette to restore the Ducati charm to the machine that always carried Bologna DNA in its veins.

At the time of this bikes making, Cagiva was simply taking the frame and running gear from a Ducati and placing their own bodywork over the top. In the case of the Alazzurra, that meant you were essentially buying a Ducati Pantah that had all the styling pleasure of the neighbour’s dog droppings on your front lawn. The ’85 model was distinctly 1980s in its visual design and by that, I mean it was god awful and hasn’t aged well ever since. But it meant a lot to its owner “The bike has been modified by the owner during a tough period of his life, this bike meant very much to him because it was a sort of distraction,” Giada tells us.

So to give the bike the looks it always deserved, they decided to go down the resto-mod path, a vintage look with more modern running gear. In the car world, this is big business at the moment and involves taking a stylish classic and giving it newer mechanicals. In the motorcycle world, it’s the opposite, start with a newer bike and dress it up with classic styling. “So the owner and we decided to remind all of the original DNA of the bike…. with a limited budget.” Not an easy task, but one Nico and Giada have achieved before.

The owner had already thrown the factory plastic bodywork and ugly tank to the side, so the boys at ND had a blank canvas with which to start. A quick hunt around had just the right tank, that is modified to fit the pre-trellis perimeter steel frame and instantly transforms the Italian into a beautiful classic. To match the look, an all-new seat was first shaped, laid over a new base, and then stunningly upholstered in traditional black leather, with a pillion pad that is removable made to match.

Sticking with the vintage theme, it was over to the English wheel and a set of super neat aluminium fenders were rolled up that keep the lines flowing perfectly from front to rear. Before it was out with the spray gun and the tins were treated to gorgeous silver gloss that only makes the maroon and gold highlights pop even more. The rest of the bike, including the distinctive frame, was painted black, with the new Bates style headlight given a gold bezel to tie everything together.

The engine is familiar to all Ducatisti as the 650cc version of the Pantah engine, a classic air-cooled L-Twin with 2 valve Desmo heads. Now left unhidden with the removal of the original bodywork, it can be presented in all its glory and the pair of Dell’Orto carbs that feed the fuel draw their air through pod filters. With 10:1 compression and only air to keep it cool the engines run hot, so keeping the exhaust gases from the cylinder fins is a set of heat-wrapped headers. Before the sound of the Ducati lump is allowed to escape via new mufflers on custom mounts.

With a limited budget to work with the suspension was left mostly standard, with the factory Marzocchi forks doing a more than adequate job having been overhauled and fitted out with a set of gaiters. The company with the big M also supply the rear shocks, which have been given a visual makeover and new mounting gear. The braking too, decent from the factory has been overhauled to maintain the original look, with a set of period looking Bridgestone rubber wrapping up the rolling stock.

With the owner having relocated the battery, the boys took care of the rest of the electrical work and ditched the big instrument cluster for a single gauge. The bars are kept uber neat with the switchgear blacked out and a set of new levers and grips. Tiny bullet indicators are the perfect addition, small in size and theme matching, with the bike finished out courtesy of a vintage tail lamp. For a motorcycle beloved by its owner and with just a limited budget with which to work, ND Motociclette has stripped away the last of Cagiva’s tragic history and rebirthed a Ducati classic that is now simply better in every single way.