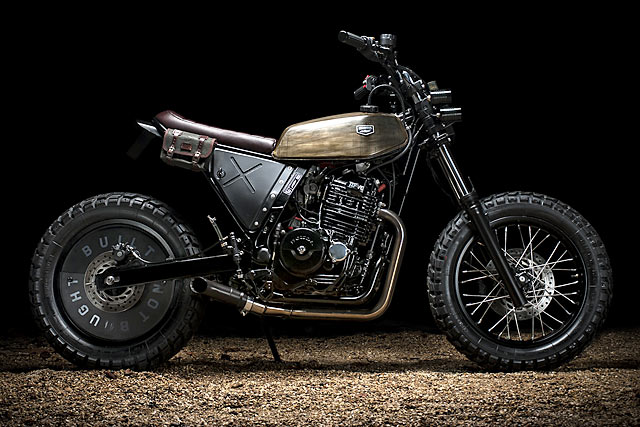 Ever met a genuinely creative person? I’m luck enough to say that I have, and there’s one thing that struck me about them. They were clearly a little bit nuts. Not in a dangerous way, but it was clear to me that they were operating in much more interesting reality than most. They were happy to generate and embrace ideas that many would have dismissed as ridiculous. And then they made them work, too. The moral of the story is that most of us hold ourselves back by thinking that the right way to do something is also the most sensible way. Kbuilt’s Gilles Kergadallan has no such concerns. He embraced the crazy for this ‘Brap One’ Honda Dominator Tracker, and the results speak for themselves. Just like the voices in his head. We asked Gilles about how Kbuilt came about. “Weirdly enough, Kbuilt begun as an Instagram account,” he says. “It’s where I shared my progress during the build with my friends and family, but it also includes photographs I took and lots of other custom bike inspiration, too.”

As a freelance graphic and motion designer, Gilles says he finds custom bike building  closely related to these other forms of design. The fact that he consumes copious amounts of bike mags, sites and build blogs along with his books on typography only proves the point – they both mean a hell of a lot to him. “It’s really helped me, so now I will share all of my future works on it – bikes or otherwise.” “I’m a big fan of post-apocalyptic stories and imagery, crazy flat tracker and I love rat rods. I also love builders like Classified Moto, El Solitario and Icon 1000 who don’t hesitate to try really original or crazy stuff. So I tried to mix all this into something coherent and cool. I wanted to do an almost-legal street tracker, a something very different from the usual Honda NX650 scrambler look that you see everywhere.” Gilles chose the Domi, as he wanted something simple and not too expensive. So he waited for a pay cheque or three and began the classifieds search. Then in March of last year, a real candidate emerged. It was a Honda NX650 Dominator from 1997. With the stock 650cc engine and decked out with yellow paint and gaudy stickers, it clearly wasn’t most people’s typical dream bike. But Gilles isn’t most people. “It all begun on paper,” says Gilles, showing his graphic roots. “First came the sketches and a moodboard, and then I moved into Photoshop so I could try many different possibilities until I had decided the details of the tracker’s final look.”

Then he moved onto the dirty work. Cutting and modifying the frame was the first port of call; then came the fabrication of numerous bespoke metal parts. Next the bike’s metal copped a complete sanding and a new coat of black. And while on the computer searching for the right parts, Gilles also took the time to design and create a deft custom logo, the results of which you can see below. “I couldn’t have it done alone,” Gilles recalls. “My good friend Christophe did some of the more fiddly work with me; he gave me some great tips on rewiring and as a classic car mechanic, he had plenty of tools to make life easier. My girlfriend made the small tool rool and bag, and she gave me some tips about the tank patina. And she didn’t complain once while living with a frame, a motor and lots of other bike parts in the living room.”

Knowing his own limits, he called on the local professionals for the powder coating, wheel assembly and the handmade leather seat. “Finally, I shot the pictures of the finished bike in my garden with more help from the other two.” A builder who can take photos, too? All he has to do is start a blog and we’ll all be of a job. Oh merde. “As it was my first proper build, almost everything was a challenge to me. Sometimes, I was stuck on a particular step or maybe the required money wasn’t in the bank yet. At other times, things would take hours and hours of research. As always, there’s the internet and I’m a member of French Facebook group dedicated to the NX650, which was amazingly helpful,” Gilles says.

“When I was making the bike parts, I created multiple versions of pretty much all the important bits. The front plate, the battery box, the wheel cover, the side panels and the tank logos. I tried and re-tried the fabrication until I was truly happy with the results.” “My favourite part? Looking back at it after I’ve finished the bike, I’m most happy with the rear wheel cover that I made for the photoshoot – mainly because I made it and painted the type on it. I’m also proud of the brake light that I integrated into the rear hoop. Also, the sound of the bike with the short silencer is very cool. No, it’s probably the saddlebags made by my girlfriend. Actually, I can’t decide what I like the most.” Fair call, Gilles. Neither can we. Once the bike was rolled outside and given some beans, its name came almost straight away. “Brap One,” smiles Gilles. “Brap for the sound, and One because it’s my first proper custom build. Naturally, I created some calligraphy for it, which you can see on the licence plate.” Custom bikes and typography? That’ll never work; this guy must be crazy.