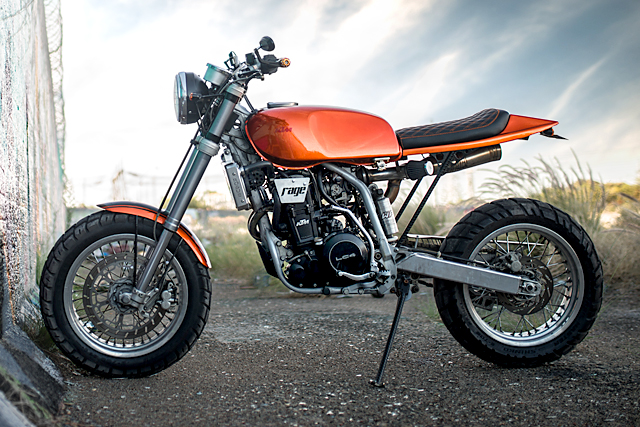 For some of the most isolated people on the planet, West Australians have a well-earned reputation for punching above their weight. Take Australian music, for instance. You may have heard of such bands as Tame Impala, The Scientists and INXS. Yes, you guessed it. They’re all from the West. Maybe it’s the sublime climate, or the clean water and fresh air. Hell, maybe they’ve discovered the meaning of life and they’re keeping it from the rest of us for shits and giggles. Steve Gernhoefer from Perth’s RAGE Motorcycles is obviously in on it. That’s the only rational explanation for this killer KTM 640 LC4. That and sheer skills. RAGE Motorcycles, a.k.a. ‘Rough As Guts Engineering’ is a small operation in Perth’s north with three pretty solid builds to date: a cafe’d ‘79 Yamaha RX125, an ‘87 Honda XL600, and this sweet little piece of work. “RAGE was born out of necessity,” says Steve.  “The necessity to help fund my bike building hobby and to disguise some of what I spent from ‘she who must be obeyed.’”

Steve’s inspiration was more of a personal design brief; that of trying to build a bike to suit his Everest-eclipsing 197 centimetre (6 foot 5 inch) frame. “I make most bikes look comically small, so I wanted a bike that would really suit both my height and riding style, which I’ve been told is loud, fast and brutal.” That’ll explain the name, then. There’s a rather funny story as to how Steve came to own the bike. “I bought this bike after a slight altercation with my nephew, who I was teaching to ride. I was riding in front and apparently I braked a bit harder than he was ready for. You can guess the rest. Insurance paid for my damaged Honda Varadero, but I repaired it myself and used the funds to purchase this ‘01 KTM 640 LC4 that was in pristine condition. I had been looking for a few weeks for a Honda NX650 when this appeared on the local Internet classifieds.” One ride was all it took for Steve to know that this was exactly the right bike for him. The build has taken just over 12 months, and Steve had figured out pretty much exactly what he wanted to achieve from the get go. “I wanted a hard, industrial feel to the bike with a no bullshit attitude.” And what better way to fire the first shot in the no bullshit war than to build yourself a new rear subframe made from rebar. Or as we call it Down Under, ‘reo’. “I continued the industrial theme on the headlight mount, fender stays and the kickstand. With some oversized, chunky tyres the bike carries nothing that isn’t absolutely crucial and it now weighs a whole lot less than it used to.”

The tank is off a ‘79 Yamaha XS 750 that Steve had shipped from Melbourne right across the country, so he was a little panicky that it would get damaged in transit. “Luckily it arrived intact, because they are damn hard to find out here.” “The seat pan came from the UK, and the seat itself was produced by local shop ‘Beyond Trim’. I’m really pleased with how it came out considering that I wanted something completely different. Andrew from the shop convinced me to go with what you see now, so I’m glad I had the sense to listen.”

Steve also took the time to give a big shout out to the guys at Rogue Motorcycles, who did most of the custom fabrication work for the bike. Steve notes that without them, he could not have got this build finished to the standard you see here. Nice work, lads. “One of the biggest, most challenging and rewarding aspects of the build was the paint scheme. Once again, a lot of great advice was put forward by the artist ‘Diablomoto Mike’ and I had many long-winded discussions on direction design and colour before we arrived at the finished article. I was pretty lucky to get mine done when I did, as he is now one of the busiest bike painters in Perth.” One of Steve’s biggest challenges during the build was getting the radiator design to be functional and reliable. As the big single puts out a lot of vibration, the first radiator succumbed to the stress and shat itself in a big, steaming, green mess. Rubber mounts solved this, but Steve’s still thinking about a totally different design for the radiator that’s been added to his mental ‘things to do’ list. Steve’s favourite parts of the finished KTM? “When I see that 1970s speed boat flake in the paint, it makes me smile. And when I hear the 130dB crack of the exhaust, it makes me laugh. But when I’ve got it tipped over in a corner with the throttle cracked wide open and the world disappearing in the bar end mirrors behind me, it makes me truly happy,” See? We told you those Western Australians had life figured out.