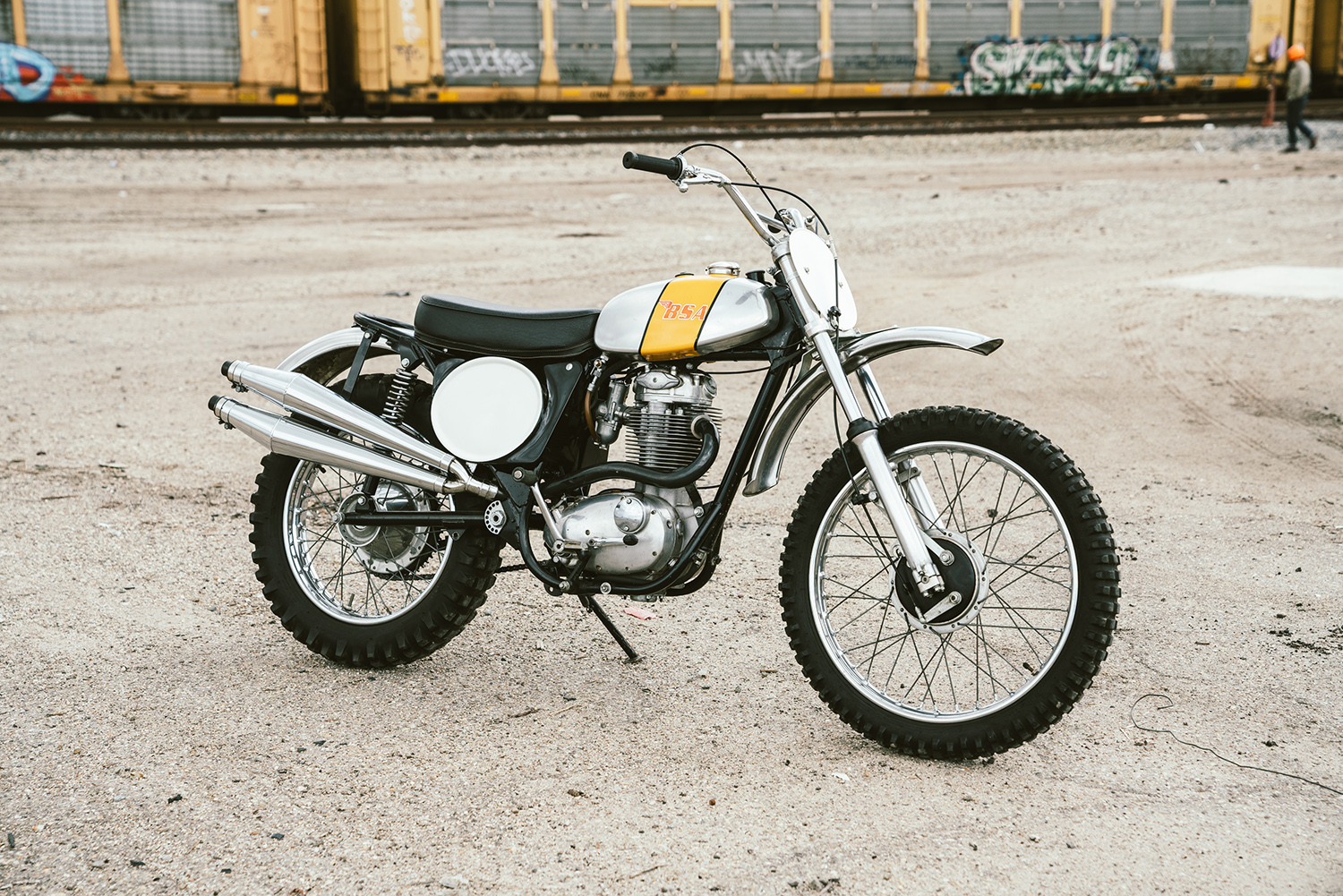 There was a time in motorcycling history when the BSA brand was king, not only did they build some of the best bikes in the world, they were also the largest manufacturer by volume. But perhaps the success of the brand was also its downfall, management chose to simply sit on their hands and failed to keep pace with the development boom that would arrive in the late ’60s from Japan and continental Europe. Looking back, however, and some of their models still stand the test of time, like this all-conquering BSA B50 MX owned by Justin Corley. The ‘Museum Bike’ as he likes to call it has a hell of a story to tell and he’s building it a home that’s out of this world.

To understand the bike you first have to understand the man and Justin’s intro tells it all, “I just relocated my private motorcycle workshop/collection from just outside Downtown Los Angeles to an old avocado farm in Ventura, California where I’m building a 1/4 mile dirt MX & flat track.” That is the stuff of dreams and so too is his collection, that includes over thirty bikes, “Mostly ’60s & ’70s Honda’s but there’s a ’74 Laverda 750 SFC track bike, a ’76 Moto Guzzi modified LeMans 850, a pair of 71/72 BSA A65FS Firebird Scramblers, and of course this BSA B50MX, which is one of my favorite bikes.”

This insight into Justin’s world lets you know just how serious he is about two-wheels and the sort of machinery that really stirs his passion. So it should come as no surprise then that he was on the hunt for years for a B50 MX. An avid eBay bidder he’d missed out on plenty when this 1972 model came up for sale on the auction site. It had been part of a museum display, one that had closed down and was amongst the last few bikes the owner was willing to sell. It might have been on the other side of the country, but Justin wasn’t willing to let it go. Being a low milage example just made it more of a must have.

Released in 1971, the MX version is of course the Motocross edition, the rarest of the bunch and the one with the hopped-up engine. There was also the street legal SS (Street Scrambler) and the T (Trail) in the lineup. In stock trim it was a weapon straight out of the box and found success with the likes of AMA Hall of Fame rider Chuck ‘Feets’ Minert. In Europe, it had instant success too, both on the road and in the dirt. But the tide was about to turn fast, lightweight two-strokes from the big Japanese firms and the likes of Husqvarna hammered a nail in the coffin and BSA was dead. Living on, sort of, in the Norton Villiers Triumph (NVT) brand that unsuccessfully attempted to save British motorcycle manufacturing.

So in his hands, Justin had the last of BSA’s truly great bikes and he had a plan to create something that was the best of both worlds. “I had considered the street version, the B50SS, but the B50MX has a more aggressive cam profile and is much more rare. I also really wanted a street-legal dirtbike with only the basics.” So to make that possible the B50 would need some additions and needing a refresh having sat in a museum for so long, it was off to gun mechanic Hayden Roberts of @helloengine to get it all dialed in and road legal.

The alloy, dry sumped, 500cc single-cylinder engine was given a good going over, but being a notoriously strong engine it only needed the basics to have it thump, thump, thumping away again. With the oil in the frame and utilising a dry sump, cleaning the old oil from the bottom of the engine is a must for a bike that’s been parked up. The fuelling comes courtesy of an Amal R9 and the ignition comes from Lucas. Then staying true to its competition pedigree it was re-wired, there is no battery, constant-loss ignition, and of course, kickstart only.

To get it street legal, well kind of, Hayden fitted up and installed a NOS Lucas light & a period-correct-looking LED rear light (not in photos). Now Justin really did have the best of both worlds, the full factory race bike that could literally be used as a daily if he so desired. “Hayden and I have discussed modifying the transmission to be more bomb-proof than the original design, possibly a 3 speed or even a 5 speed off a Triumph (it’s been done!) but it’s hard to stray from factory original.” So for now the search is on for another B50 to be modified.

“It’s kind of nerve-wracking to ride a museum piece,
but we gotta ride em’ not hide em.”

With its stunning alloy bodywork, that classic big single British look, and the single pipe into twin-muffler exhaust, there really is no need to touch the looks. In fact, it would be a crime to do so, especially such an original bike with only a few hundred miles on the clock. “It’s kind of nerve-wracking to ride a museum piece but we gotta ride em’ not hide em’ and I had to accept the fact that I was going to scratch the perfect paint at some point.” Justin smiles.

And who can blame him, it’s just BSA barebones badassery and when that track is finished we can only imagine how good it’ll look with the back end kicked out, the dirt flying and Justin grinning from ear to ear. But captured static in all its glory, you just need a good brew and some time to truly take it all in, what a treat!