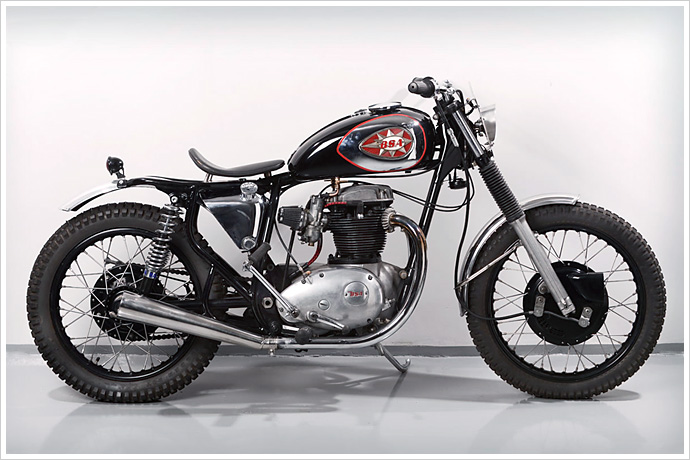 It’s a truism of sorts, but in many ways customising bikes is as much about what you remove and where you cut the bike as it is about what you add. Many builds that are hailed as ‘miraculous transformations’ turn out to be mostly about the builder’s skill in seeing past all the external frippery and into the core beauty of the bike’s design. As Michelangelo famously put it, ‘I simply saw the angel in the marble and carved until I set him free.’ And if ever there was a bike the personified that approach it would have to be this, the latest build from Spain’s La Raiz (or The Root) Motorcycles. The rather enigmatically named ‘Le Gons’ from La Raiz helped us fill in the details on the build. “We did some changes from the original BSA design. We reduced the subframe a few centimeters and we changed the shocks for new ones, which were quite a lot harder than the old ones.” As the donor bike was a pain to get started, the boys also exchanged the old electrics system for a new one with a smaller coil and skillfully hidden electrics. They also took the time to fabricate themselves a bespoke pipe set from their own design. And time is something that the La Raiz boys are obviously in short supply of. “We spent more than a year to complete this project because we can only dedicate our free time. We all have to work in other jobs,” notes Le Gons. I’m not sure about that, but I know if I was given the choice between a dark, greasy garage and enjoying a jug of Sangria in the Parque del Retiro, I’d be choosing the red-wine-and-sunshine option every time. “This motorbike is for a customer called ‘Nortes’, a tattoo artist living in Vigo, Spain. His passion is traditional tattoos and classic bikes. He already has a Norton Commando, Triumph Bonneville, a Harley XL1200 and now a BSA Lightning, too.” And for the purists amongst us, Le Gons is quick to point out that they spared the grinder on the bike. “We tried not to change the geometry of the motorbike, preserving the original style as much as we could. To balance it out we put some more personality into it with a race plate and dirt tyres. We then simplified the rear of the bike with a single-seater configuration.” Works for us. In parting, Le Gons did the right thing and tipped his hat in thanks. “Now we have finished this project, we’d like to thank everyone who cooperated and supported this restoration. And we also have to mention our clients, who are the ones who let us do what we love and improve our skills with their bikes.” Amen to that.