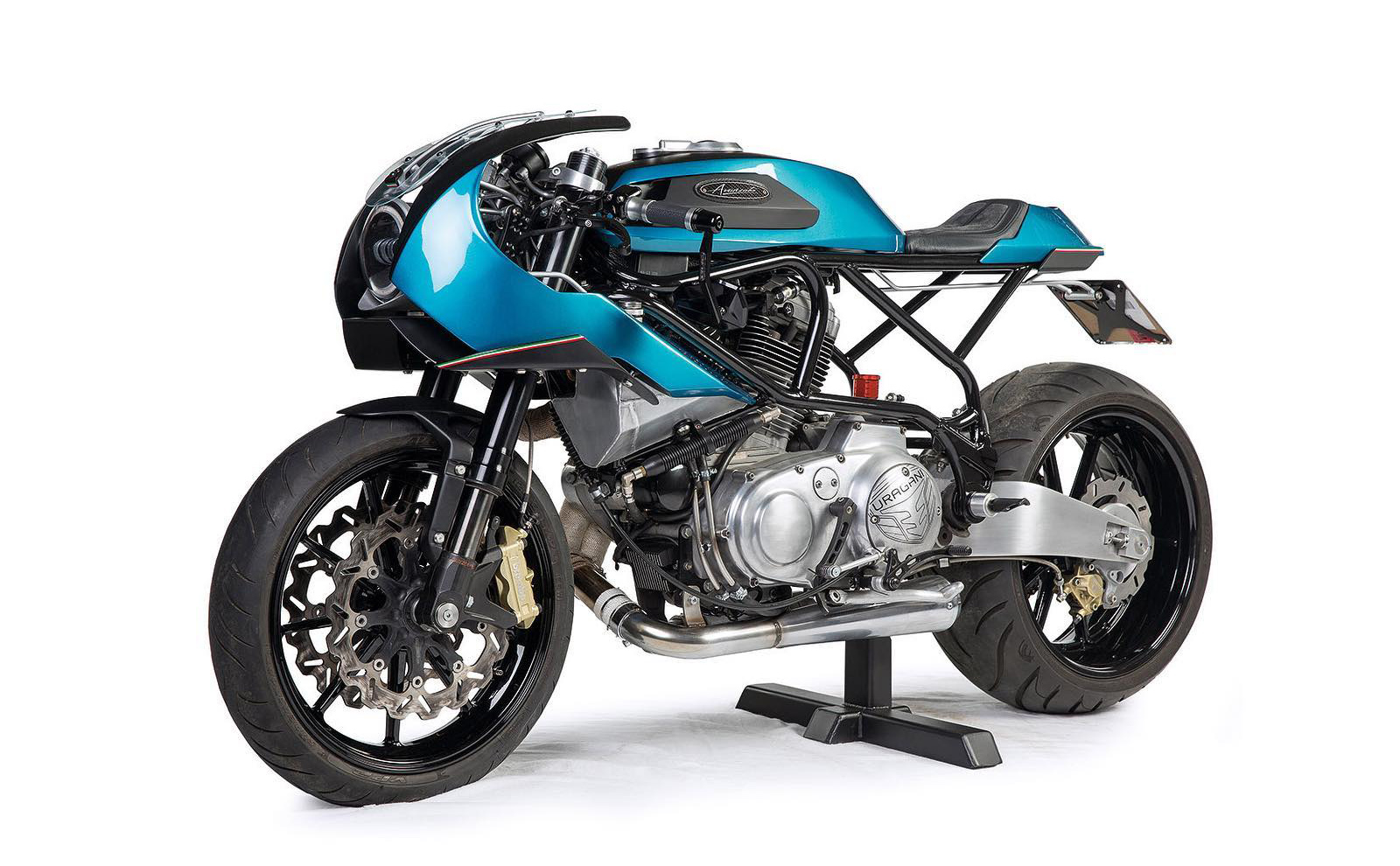 Harley and the Davidson’s is one of the most successful partnerships in the history of the automotive industry, but it turns out while two’s company, three’s a crowd. Time and again, the Buell name has been owned and associated with the Milwaukee outfit, but it’s a relationship that never seems to work out. Which is a shame, because some of the best motorcycles to come out of the US in recent decades have worn the name of visionary Erik Buell. Most that get love and respect are the ‘fuel in frame’ models but don’t sleep on the lesser-known bikes. And Switzerland’s Officine Uragani certainly hasn’t, giving this M2 Cyclone a new futuristic lease on life.

The XB series of Buell’s and beyond have always gained more attention, not just because of their fancy frames, but for their improved refinement and much better looks. But the late ’90s saw some pretty darn cool bikes wear the Buell name, with the S1 being the lightweight and high horsepower model and the M2 fitting into the middle of the range. It’s always struggled for fans in the looks department, but with an engine that delivers torque all through the rev range and a well setup chassis, it makes for an excellent base.

It was this potential that saw Italian designer and builder, Raffaele Gallo put down the money and give this unique piece of American muscle a makeover. Under the banner of Officine Uragani, he’s never been afraid to take on the ugly ducklings, giving amazing makeovers to machines like the Honda CX and BMW GS. One thing that draws many to the older creations of Erik Buell is his frames and their sporty nature compared to most American motorcycles. But for Raffaele, the factory Chromoly unit just wasn’t up to his standard.

So the cutting, welding, and reshaping began, all in the search to create the perfect frame to hold a heavy V-Twin. Stiffness was added to improve feedback to the rider and mid-corner stability, while the subframe was modified to improve the aesthetic. With the final goal of a chassis that was overall more compact in design, and yet stronger than the original. Then it was onto the bodywork and this is where Raffaele truly excels, every last piece is painstakingly hand-shaped from aluminium. “The front fairing alone consists of four carefully shaped pieces and also houses the oil tank.”

But that was one of the easier parts, the gas tank is largely a single piece that is both utterly beautiful and incredibly complex to build. The gorgeous lines sit perfectly atop the frame and the tank also features a glass insert to be able to view the fuel, as well as an incredible machined filler cap that houses an analogue clock. Even the relative simplicity of the tail unit is not straightforward, the stepped design and additional carbon winglets to match the front, all give something for the eyes to feast upon.

Which is where the paintwork quite literally shines, the gloss of the blue radiating as it comes up against the carbon and raw metal finishes, some of which have been blessed with the Italian tricolor. Even the front subframe and rear numberplate holder, both finished in silver add to the spectacular appearance, as they seem to almost float effortlessly towards their intended destination. The seat adds a little excess, with a little animal skin of some description, teamed up with a suede-like material to provide the perfect throne.

There is an aggression in much of Raffaele’s work, bold lines, mean angle,s and a stance that says get out of my way. And nothing adds to that fearsome feeling like a meaty rear tyre, this a whopping 240 section on an 18-inch rim. Obviously, this was never going to work with the stock swingarm that was designed for a 170/17, so considerable effort was spent cutting, widening, and then rewelding it all back together. To match the look the front end gets beefy too, huge milled triple clamps hold the USD forks in place. Complete with black mag wheels and Brembo radial brakes, it’s a hell of a package.

The engine doesn’t miss out either, the 1203cc unit now breathing through a stunning air filter with a machined basket. The exhaust in typical Buell style wraps tight to the engine and finishes out under the bike, a more traditional chromed reverse cone muffler chosen for the task. The drive belt has been tossed aside for a chain conversion, and the new clip-ons and custom rearsets give the bike a very racer-like riding position.

The workmanship is first class, the hours required are almost unthinkable and the finished product leaves you wondering, why can’t Buell finally get their act together when others can do so much with their product.