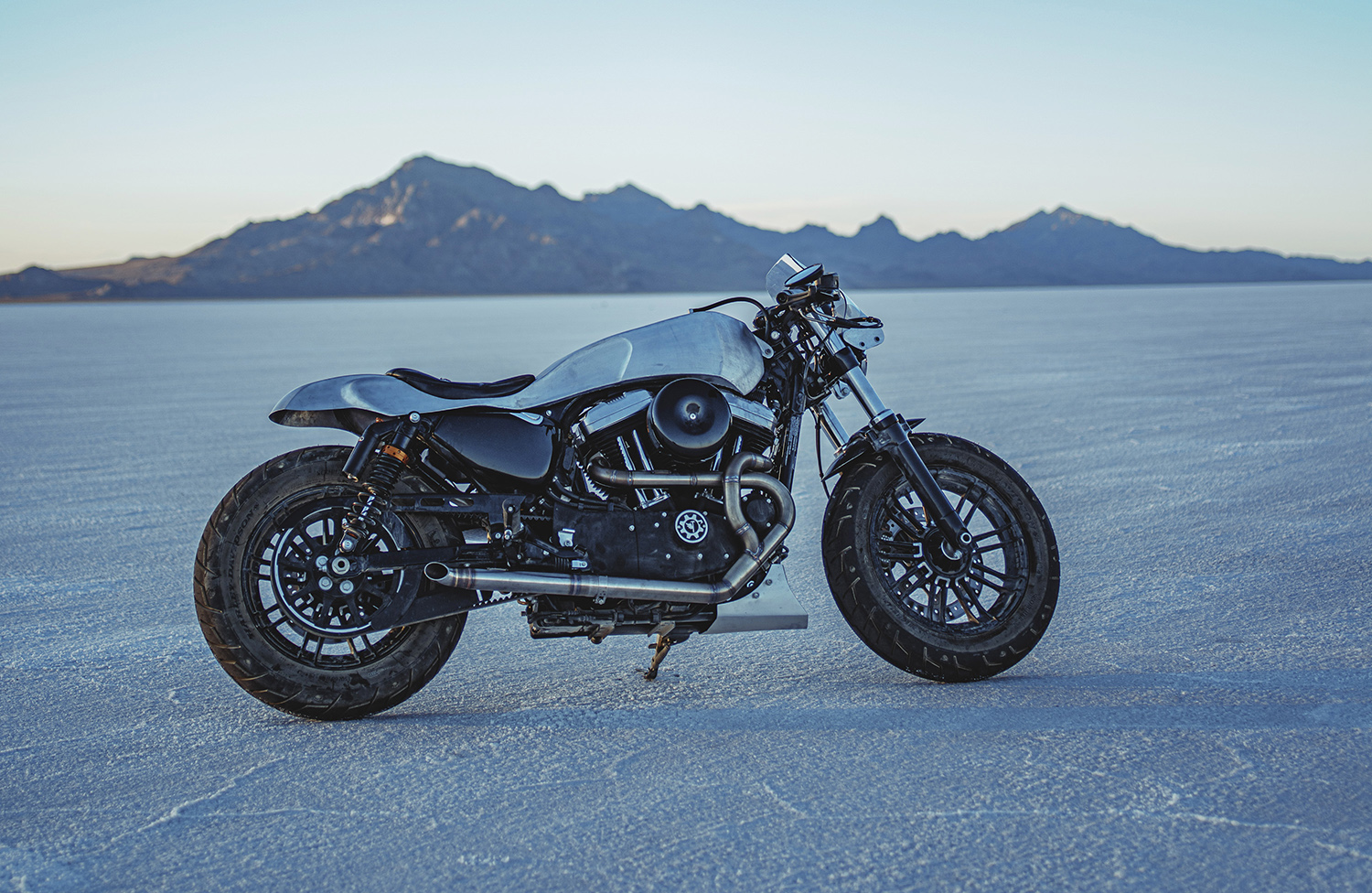 Every custom motorcycle builder has their own way of working: usually in solitude, with their own familiar tools and techniques honed over years of practice. So when David Chang from @caferacersofinstagram had the idea to round up some of the best bike builders in the business to create a custom motorcycle in a week to raise money for the charity Waves for Water, he always knew it was going to be an ambitious project. Throw in a liquor sponsor and a group of old friends that usually only see each other at bike shows, and the build turned out to be even harder than they all thought­ – and a hell of a lot more fun.

David has always wanted to give back and use his huge @caferacersofinstagram platform for good. After a trip to Thailand, he carried life-saving water filters in his backpack to give to some villages that didn’t have access to clean water. “Seeing the impact a simple water filter could have on someone in a rural village who doesn’t have access to clean water,” David says, “experiencing and seeing that just confirmed the thought of doing this project.”

David reached out to some of the builders who he has become friends with over the years to pitch the idea to them. To his surprise, they all jumped on board and generously donated a week of their time to the Built for Good project. “I wanted to figure out a way to build bikes, build community and give back,” he says. “Bringing people together and doing something good, and also fun, just made sense.”

There were four main builders who would make up the project’s dream team: the young Canadian Jay Donovan, who already has numerous bikes in the Haas Museum, and can construct intricate and beautifully flowing organic metal; J. Shia from Boston-based Madhouse Motors, who is not afraid to build out-of-the-box motorcycles from unconventional parts; Joe Mielke from SNAP Fabrications, a metal fabrication wizard who works out of his shop in South Dakota; and last but not least, the legendary Cristian Sosa from Sosa Metalworks, who has won loads of awards for his incredible bikes and has spent his whole life shaping metal for anything with wheels.

With the team assembled, David got to work finding sponsors to make it a reality. Harley-Davidson jumped on board and donated a brand spanking new 2021 Forty-Eight. All four builders working on the bike were masters with metal, so they knew this would be the perfect donor for an aluminum monocoque bodied build.

The team spent a week working out of the Sosa Metalworks workshop in Vegas, working into the morning every day – sometimes pulling all-nighters. As the build progressed, they found their rhythm, and because there was only a certain amount of metalworking tools to go around, they started worked in shifts. “The fact that three guys shaping metal on one large component managed to bring it all together in the end is pretty satisfying,” Joe says.

“I wanted to see how these four people would come together and how their creative flow and building habits, would it clash, would it be cohesive, will they work well together… all of that,” says David. “Building a motorcycle in such a short timeline requires so much energy, focus and rest – which no one got! They worked so hard… I was very impressed by it.”

There were still times they thought they may have bitten off more than they could chew and were worried it wouldn’t be finished at the end of the week. “I was a little unsure whether the build would actually get done, because I realized this was no easy task. It’s absurd actually,” recalls David.

Over the course of a week, hundreds of man hours were poured into this Sportster. A fully hand-formed aluminum monocoque body was crafted, artfully hiding the fuel injection equipment and allowing the frame to remain in stock running form. Additionally, clip-ons and rear sets were utilized to suit the body, creating a functional and stylish form for the rider.

After the bodywork was complete, the last piece of the puzzle was to create a custom exhaust worthy of the bike. This job was outsourced to the talented guys at Mad Exhausts in the Netherlands, creating a handcrafted two-into-one unit. With the bike completed, there was only one thing left to do… photograph it. David loaded up the Sportster into the back of the truck and headed out to El Mirage with photographer Brandon Lajoie and the media team to take shots and video on the dry lake bed in the Mohave Desert – which looks like another planet.

To own a custom Harley built by one of these legendary builders would be a dream for most of us, but to have a bike built by all four is definitely a once in a lifetime opportunity. There’s only a few days left, so jump on to croig.co, where you can donate directly to Waves for Water and, even if you don’t win, at least you’ve helped give something to our fellow humans that we all take for granted – clean drinking water.