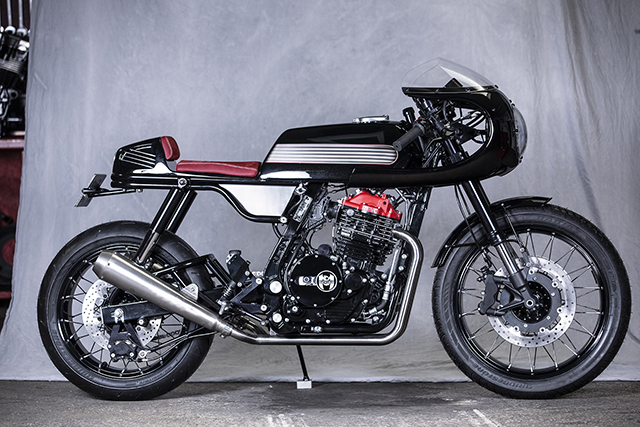 Long before YouTube there was Claude Lelouch’s epic 8 minute masterpiece, C’était un rendez-vous, showing the French are as mad as the rest of us. Fellow Parisian Isidore Delgrosso shares that need for speed but prefers to get his kicks on two wheels. From his workshop MécaServices92 near the heart of the city, he utilises his engineering talent to produce some of the countries finest customs. Now he’s back with a ’90s Honda NX650 Dominator café racer that’s been touched in all the right places. 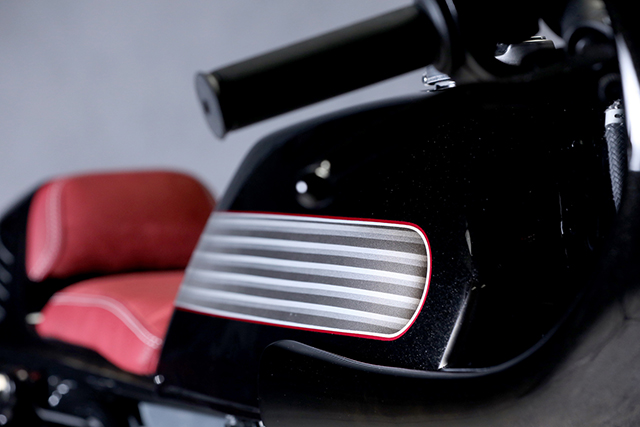 Having previously built a modern custom killer from a Honda 650 Vigor with the same single cylinder RFVC as the NX, Isidore wanted to take things further. Not that the original Honda build was underdone, with a fully built engine, single-sided swingarm and new R1 Forks. But with his talented team around him he knew they could go one better and when he got a call about a true barn find NX650 covered in dust he knew it was time to “transform this dual-sport bike into a real café racer.” 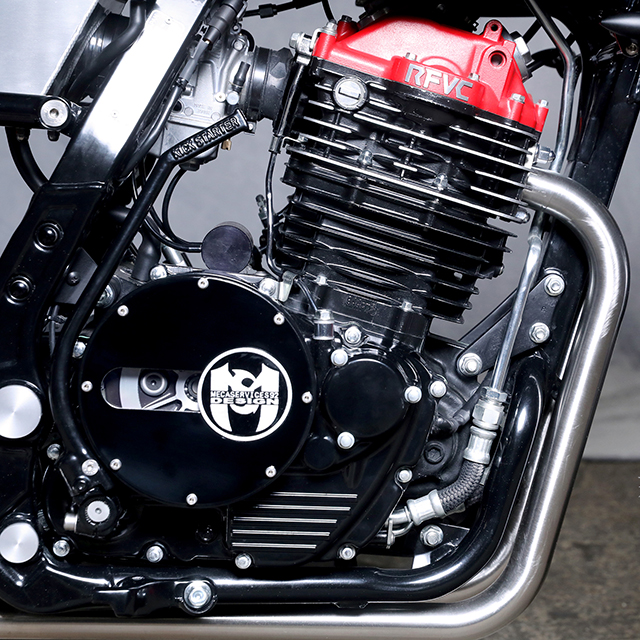 With one of his employees left to tear down the bike, Isidore pulled the engine and set about a rebuild that would turn the humble single pot into a stone cold killer. Sandblasted and then torn down to the last bolt the gearbox was given all new parts, while the stators flywheel was machined to lose some weight. A new clutch basket was next in with aluminium friction discs replacing the steel and a clear clutch cover installed to show it all off. While this was being done the cylinder was out for a rebore to take capacity out to 675cc. 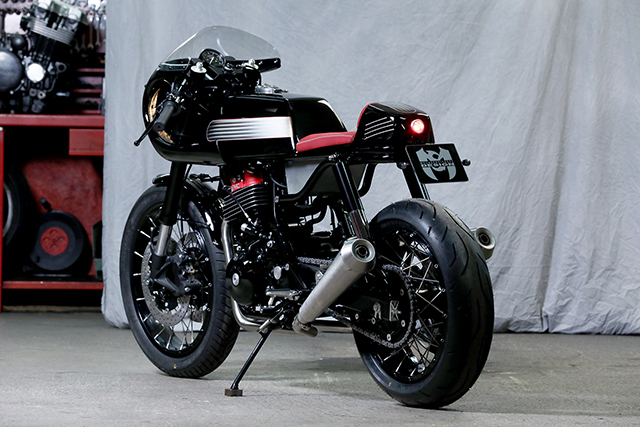 Piecing the engine back together the polished crank now swings a forged conrod with a high compression piston thrown in for good measure. While the head has been given the works with new bronze guides, HRC supplied camshaft, a port and polish, before everything was coated in a low friction DLC treatment. To supply the necessary fuel a Mikuni TM40 carb was jetted appropriately for the combination and draws air through a custom alloy box with velocity stack. While all the gases from this monster mill exit via a custom stainless exhaust and twin Marving mufflers. 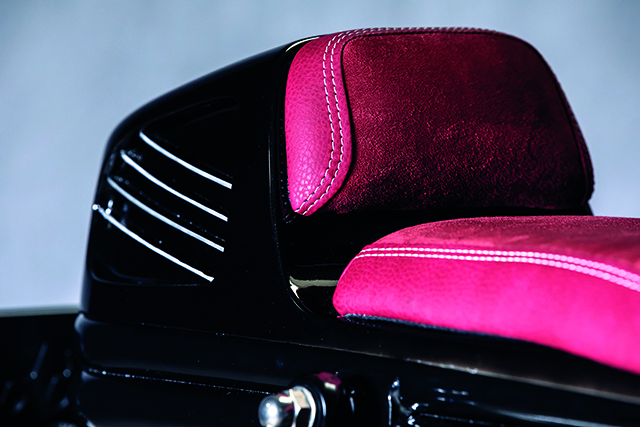 With all that work done there was no way Isidore was fitting up the engine to any old frame and he and his team set about crafting something equally as special. With a full alignment and repaint the front section of the frame is joined by a custom fabricated subframe that utilises a twin hoop tail. Not only does this provide enough room for the full electronics package but makes for ultra stiff mounting for the new twin shock setup. To make this possible the single shock pro-link is chucked aside with a new caged section added to the swingarm to support the one-off Fournales dampers. 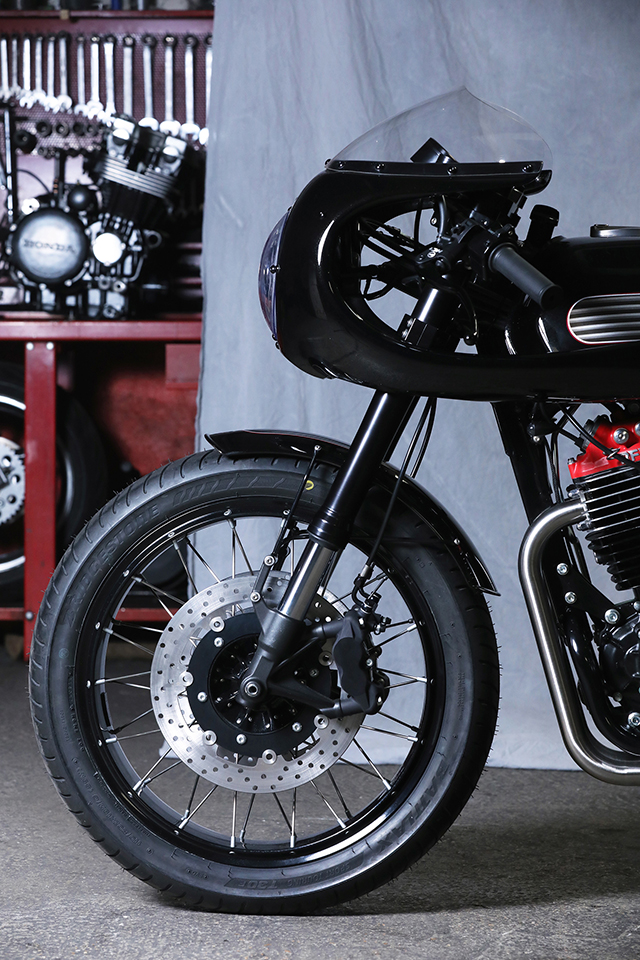 The front end is no less as impressive with modern USD forks pulled apart and rebuilt to suit the bikes weight and internally lowered 20mm. To make them fit a new steering stem is installed into the CNC machined triple trees that were designed in-house before being milled by USV Racing. The braking is just what you’d expect from a team that doesn’t cut corners with twin 298mm floating discs providing plenty of power for the lightweight bike. While the 4 piston calipers have been machined down and sport all new braided lines. 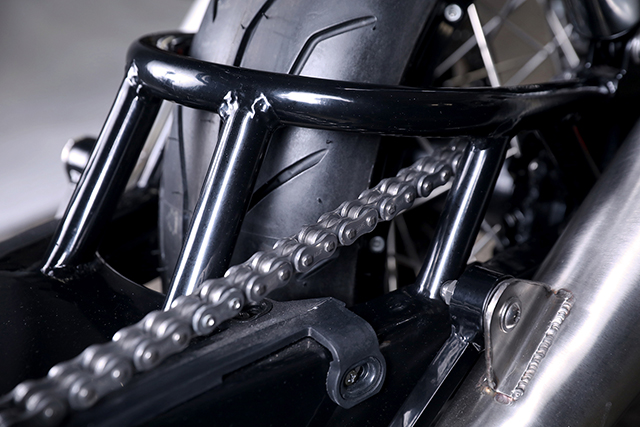 Dressing up the package, the bodywork is required to totally transform the bike from old plastic warrior to smooth steel cafe racer. With the tank they were after found, it was treated to only the best in panel work, with a new filler cap welded in. The tailpiece was designed to match the lines and Carbon Shape took care of its manufacture from carbon reinforced glass fibre. It’s topped off with a seat by SQP Motors in red with white stitching. While the front fairing designed by Nuno Capêlo is mounted on adjusters for perfect positioning, genius. 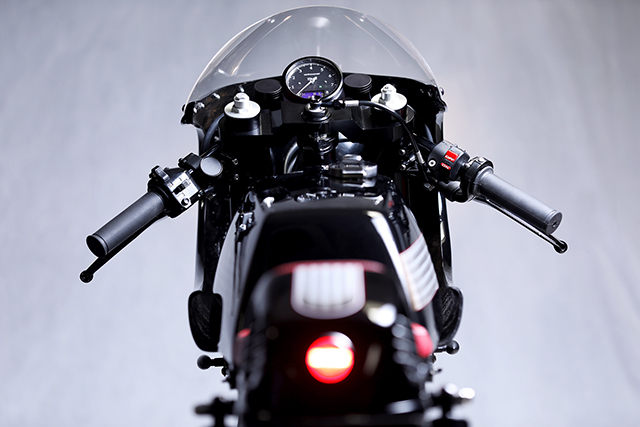 There are little bits of brilliance wherever you care to look, the tail light a combination of machined shell and red lens made by a stained glass craftsman. While the decision to use perimeter spoked wheels meant that the hubs had to be machined from scratch and more mastery comes with the foldable rear sets that click-lock into multiple locations to allow the kickstarter to swing freely. To finish it all out Jean Eric Tallemet laid down the paint and a set of sticky Bridgestones fitted up. It’s impossible to imagine what else you could do to make a humble NX650 any better and it’s this no stone left unturned approach of MécaServices92 that delivers such an incredible result. 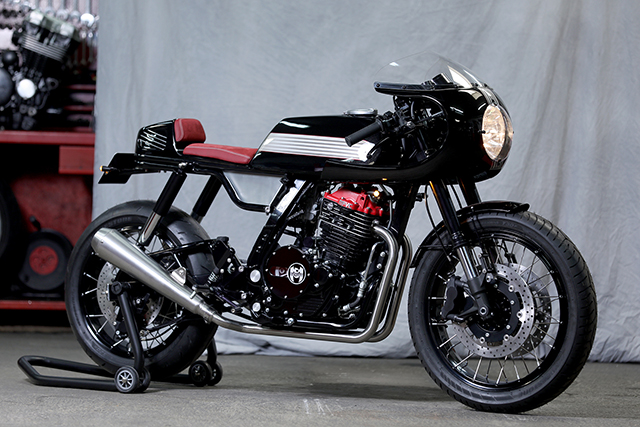