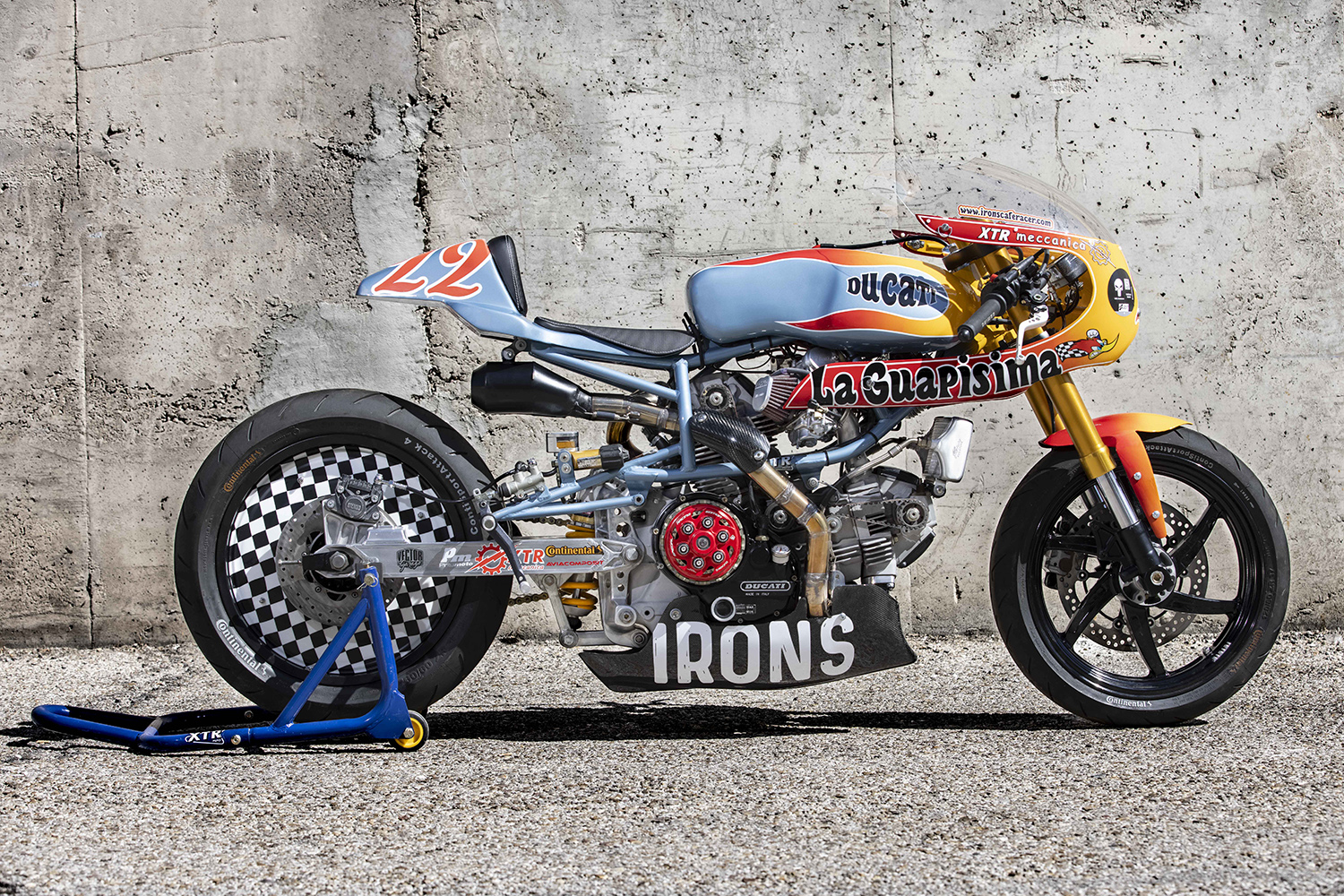 For the hardcore motorsport fans amongst us, Covid-19 delivered yet another kick in the guts, with racing either completely shut down for the past two years or run with few if any spectators. Here at Pipeburn HQ, we can watch machines with wheels go round and round for days, but one event that really blows the wind up our skirts is the epic Sultans of Sprint drag race challenge run across Europe. So what better way to get excited about the return of Sprint racing than hearing the news that one of the world’s best builders has thrown his hat in the ring. Meet ‘La Guapísima’ (The Beautiful One), a drag ready Ducati built by the legendary XTR Pepo for Spain’s Irons Cafe Racer.

Pepo Rosell simply needs no introduction, he can take just about any bike and turn it into an incredible race replica for the road, specialising in tributes to European Endurance racing. Some of his machines can be seen on display at Irons Cafe Racer in Madrid, one of the coolest clothes and accessory shops in the custom scene, anywhere in the world. So with the team at Irons looking to go Sprint racing, it made perfect sense to have their friend Pepo build them a bike.

To start the build Pepo had two things in mind, to make a sprint racer in his usual style and to give it the look of an American dragster of the ’70s. Those were some glory days, with the likes of Don ‘The Snake’ Prudhomme, ‘The Mongoose’ Tom McEwen and ‘Big Daddy’ Don Garlits putting on a hell of a show, in their crazy and colourful contraptions. But every racer needs a foundation and for this build, Pepo picked out a frame from a Ducati Pantah 600TL. A stiff trellis frame that is capable of accepting a whole host of engines, makes it an excellent choice.

And the engine chosen for the task is another left-field selection from the broader Ducati family, a 900cc L-Twin from a Cagiva Elefant. A bike much more at home tackling the Dakar, than a 200m straight line sprint. But its two-valve Desmo heads give excellent torque potential and Pepo was keen to take maximum advantage. The heads themselves have been opened up with a port and polish, while a set of high compression pistons get slotted in too. The ignition is now tuneable for weather and track conditions thanks to a 16 map Silent Hetkit ignition.

To feed the fire, the injection was ditched and a set of Keihin FCR 39 carbs bolted up, which will generally be run at 100% throttle. The exhaust system is all about max power with a 2-into-1 Wolfman system, and everything is kept safe and cool with an RC Racing oil cooler kit. But while horsepower gives you a big advantage, getting it down to the track is always the biggest hurdle. So to aid the team’s efforts, Pepo fitted a lightened flywheel, anti hop clutch from Ducabike and a quick-shifter, so gears can be selected with the throttle held wide open.

A master of providing bodywork with both form and function, Pepo turned his attention to the tins and the XTR front faring will provide excellent protection and wind deflection down the strip. The fuel tank has some amazing lines and is a custom XTR creation, so is the carbon fibre belly pan that helps limit the air disturbance and catches the guts of the engine should they fall out on a hard pass. The tail unit is a funky shape that definitely has those ’70s vibes and is trimmed for the rider’s comfort. Then it was all over to Pintumoto to lay down the crazy colour scheme and there will be no missing this bike in the pits!

Back to function and suspension is an all too often overlooked part of drag racing and Pepo wasn’t going to get it wrong, using a Pantah 350 swingarm to get the wheelbase he was after and then pairing it with an Ohlins shock for maximum control. For the front end, it’s all about facilitating weight transfer to the rear tyre, and it was found a set of Hyosung GT650 forks would do the job, dropped through a set of lightened yokes. The Hyo provides its front wheel, while a lightweight alloy rear wheel is used, both wrapped up in Continental Conti Sport Attack 4 tyres.

From here it’s about making the rider feel at home and in control, allowing them to extract maximum performance from the machine. RAV footrests and custom XTR clip-ons get them in position, with a Domino quick action throttle helping to dial in 100% of the power. All of the master cylinders are from Brembo and a Frentubo clutch line was selected to ensure a consistent lever as the rider attempts to control the traction at the rear wheel. An AviaCompositi dashboard provides all of the vital signs, with RPM front and centre and now the XTR creation is ready to roll.

The bike will have a happy home at Irons Cafe, but only until Glemseck 2022 rolls around and this Ducati with the heart of an Elefant can finally be unleashed in anger.