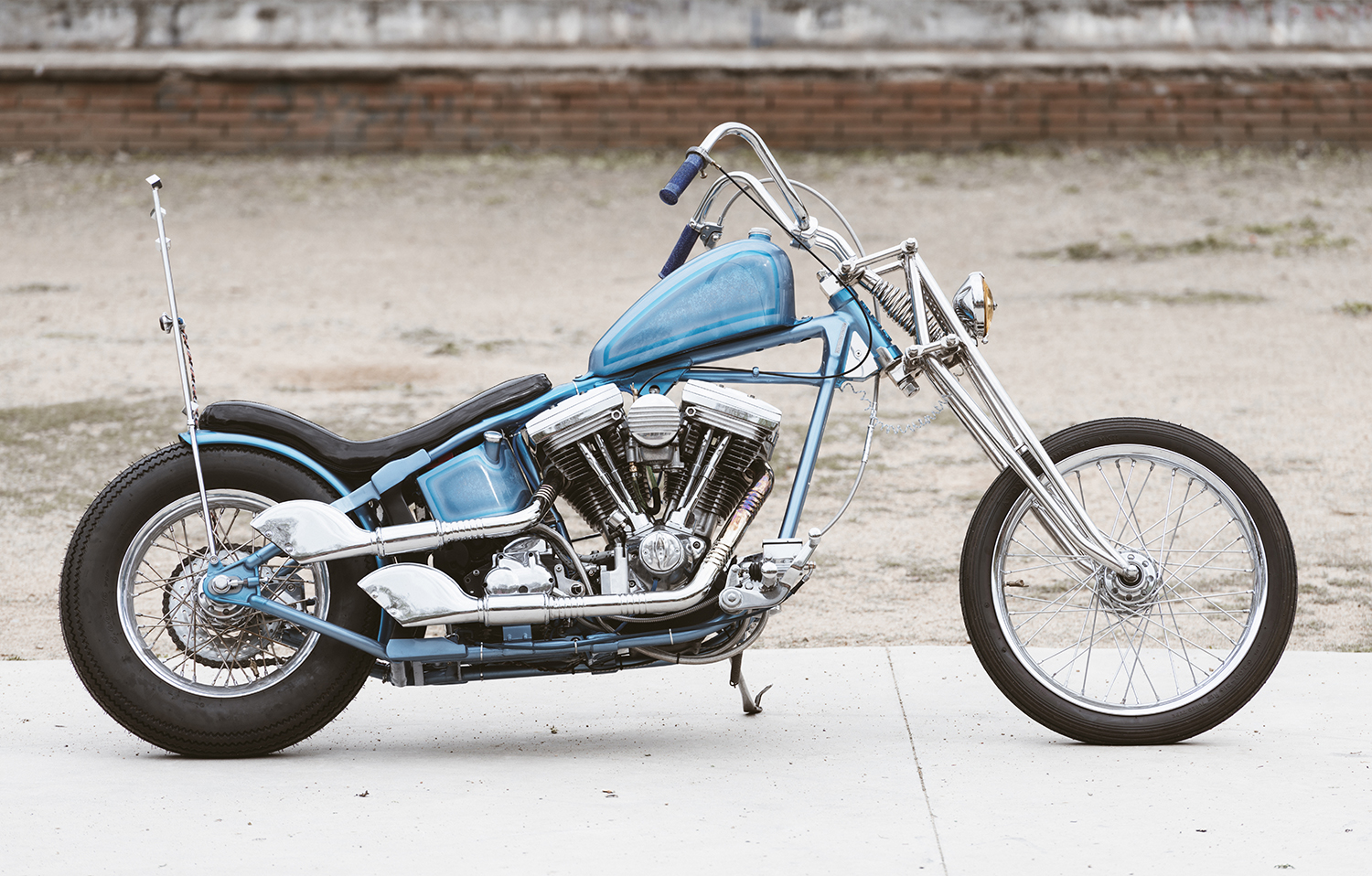 Spain has a rich history in motorcycling, from producing an endless list of world champions across every discipline of racing to being home to famed brands of the two-stoke era like Ossa and Bultaco. It’s also the land of endless race tracks, Catalunya near Barcelona, Motorland Aragón, the Ricardo Tormo circuit in Valencia and Jerez, just to name a few. But it’s not too often that you link the country to Harley Davidson, let alone some of the coolest old school choppers you’ll ever see. That is until you discover Marcos Vazquez of Free Kustom Cycles who lives the lifestyle with as much passion as anyone you’ll meet. And nothing gets the heart pumping for the American v-twin like a ’60s styled chopper from the glory days of custom cool!

To give you an idea of how much Marcos bleeds the culture, he not only runs his custom bike building business, but is also Spain’s official distributor of Mooneyes products and accessories. Add to that his own apparel brand, FUKC Clothing Company, and the facts he’s co-created a book on the history of the Mooneyes backed Yokohama Hot Rod Custom Show, and you start to get an idea of just how much this whole thing means to the man. He’s been a guest of honour in Japan at Mooneyes, presented trophies that he’s personally made, been an invited builder to shows across the globe and when he’s not doing all that, he can be found touring Europe on a Harley with his wife.

A trip he’s done on this particular bike, but that was when it was a completely different beast and in its first incarnation as a custom. The bike had been brought from the US of A to Spain by an American who was in the country to compete in the Sailing World Cup. That was over 12 years ago and the bike had come to Spain already decked out like an Arlen Ness special. Not a style Marcos has ever really been into, but he still had to have the bike as the potential beneath the skin was there. One of the things that drew him to it was the fact it was a factory 1990 HD Springer, but that stock suspension was too tame for our man in Spain.

First, however, he had to get it stripped down and with the bike having sat around as customers took priority, nothing gets the motivation going like an invite to a show. This one came from the boys behind Art & Wheels in Switzerland. “I had little time but the ideas very clear, to make a sixties chopper but something different from what was lately being done, so I got to work!” With the frame back to bare steel it’s no longer the comfy ride of a softail but a rigid, with the rear section built properly to accommodate a fat rear tyre. While the front end also gets a big change, the neck cut and extended to a whopping 42° rake and reinforced for safety.

The springer suspension wasn’t going to be left standard either, in fact, what Marcos really desired was a girder and when he saw one in the south of Spain, he had to have it, “it stole my heart”. Customising it and getting the footprint right was done in assistance with Miquel from UNITAT METRICA, who together with Marcos gave it all that crazy form but with maximum functionality. The wheel and tire combo helps to set it all off and at the front end that meant sourcing a 21in hoop from a Heritage Softail laced up to the hub that worked best on the girder. The rear is a fat 16×5 with a TT Classic tire, while the front is a Speedmaster that had to be brought in from the US.

The tank on such a bike is key and with it now rolling a few could be offered up to see what was going to work best, “I used a gas tank that I made some years ago for a friend of mine and which fit perfectly on the frame, a peanut gas tank that I tightened and welded as a Frisco style,” Marcos explained. The fit to the frame is flawless and so too the integration of a high rise custom filler cap and side mount petcock. The sissy bar too had to be unique to the bike and so Marcos crafted it himself including the Midway Cycles tail light into the design.

The rear fender was also made in house, then the seat base was shaped before being sent out. From here Ivan Bartolacci from Calavera Leather took over and the flash leather, curved stitching and buttons all scream ’60s psychedelic. But it might take you a little while to notice, as nothing takes your eye like the world-class paint job that is required to get you into Mooneyes Japan.

Marcos knew the colour he wanted but elite painter Kilian Ramirez of Pic-Astudio hit the Kandy Blue combo out of the park with Pulido Metales Perez polishing it all to leave it looking a million bucks! The accessories from Mooneyes, Wannabe and Seven Sins do their job without distracting from the theme.

Now Marcos just needed the horsepower to match and the stock 80ci Evo motor was torn down for some power parts. With it cracked open a set of Crane Cams gives the signature HD soundtrack an even more lumpy vibe. On the intake side the S&S Super E carb provides the fueling and of course wears a Mooneyes air cleaner. While there is no missing the custom made exhaust, the ripple pipe from the guys at The Factory Metal Works is period-perfect.

With the finishing touch, the shark tail tips coming from an old Panhead in the shop. Nearly two decades into his journey as a custom bike builder and clothing designer, Marcos finally had the bike that, for him, symbolises it all. He lovingly calls it ‘Lonely FUKCer’, but he couldn’t have done it without the endless support of his wife and riding partner Monica and their two amazing kids.