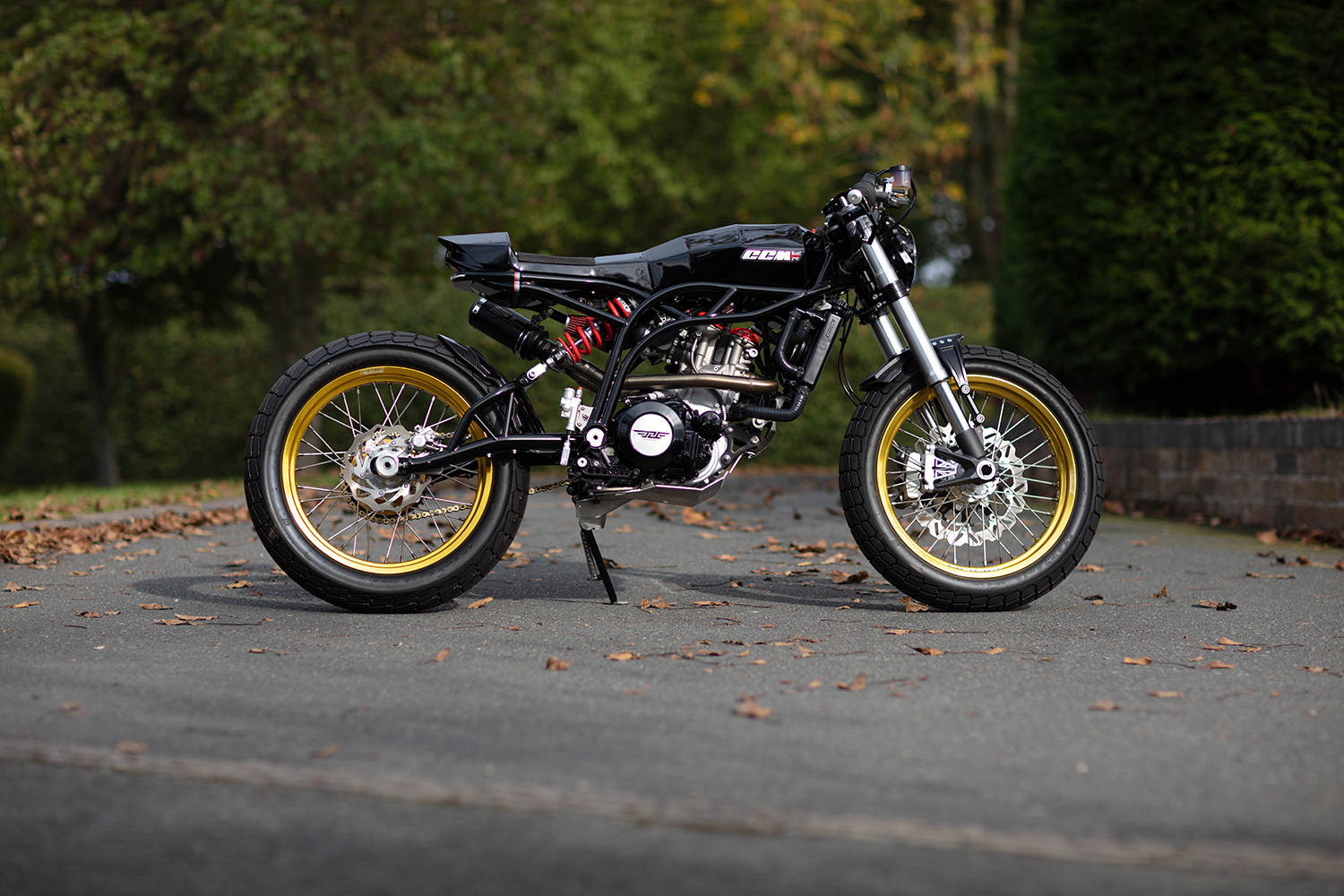 When you hear a motorcycle that was built on television is coming up for sale, you immediately think of some godawful theme bike built in the early 2000s. But thankfully things have changed a hell of a lot since then, and while there is no one mega bike show on the box, some great ones have popped up with genuine builders crafting some slick machines. One such show is Goblin Works Garage and part of the on-screen trio of talent is builder and bloody good bloke Ant Partridge. As the bike guy on the show, British manufacturer CCM commissioned him to transform one of their incredible Spitfire Cafe Racers to promote their in-house custom-build program. So, before it goes on sale, feast your eyes on the best of British, as builder and bike company team up for a blacked-out beauty that is an absolute hoot to ride.

For those who don’t know about CCM, the company was founded in 1971 by Alan Clews, a successful Trials and Scrambles rider. In those days you basically couldn’t buy a lightweight, off-the-shelf motocrosser and so he started to build his own. The problem for Clews was that every time he finished a new build, someone wanted to buy it, and he’d never end up with a bike of his own. A pioneer of crafting four-stroke machines that were highly competitive at a world GP level, there was only one thing for it, start his own company and production peaked at around 4,000 bikes a year during the ’80s.

In recent years, the company has been producing some amazing limited production run single-cylinder road bikes that have one of the most distinctive styles on the market. One such bike is their Cafe Racer and it was over to Ant to transform it in front of a huge audience, “The bike was built on the TV series that aired in 220 territories in over 120 countries worldwide. The bike started life as a standard 2019 Spitfire. All the custom work is “bolt-on” so if the new owner desired the bike can be rebuilt back to original and comes with all the OEM parts.”

The base of the CCM range is the handbuilt chassis, an absolute work of art, which is perfectly tig welded together from a high-strength steel tube. The tubular design looks like something that would come out of a custom shop but has all the benefits of being computer designed by some of the best engineers in the business. The swingarm is of the same extraordinary quality and both are covered in a beautiful gloss black to suit the overall look that Ant had in mind. Most people would look at the stock bodywork and be thrilled, it’s as good as anything out there, but like any custom builder, Partridge saw a unique way forward.

So with all of the stock bits removed and working with designer Paul Drake, of Ziggy Moto fame, they came up with one hell of a clever idea. A monocoque body always looks great, but it’s the way in which it’s built that really shows off Ant’s talent. Starting with a big sheet of aluminium, it was over to a water jet to cut it out in precise detail, before the whole thing is folded up like origami and then perfectly welded together to create the tank, seat base and tail section in one solid piece. The whole thing is painted in the same gloss black, with a machined pop-up filler cap for that ultra-clean look and the CCM badges taking pride of place.

The murdered-out appearance continues with the fenders being carbon fibre on black mounts and Ant swapped out a host of billet aluminium pieces for hard black anodized bits, which keeps the theme cohesive from one end of the machine to the other. The stock weight is exceptionally low with a dry weight of just 125kg, but Ant wanted even less and the race foam seat is a nod to that need. Despite the low mass, the braking is still kept powerful, with the front end featuring a radial mounted Brembo caliper clamping a 320mm disc, and a 240mm unit for the rear.

The engine is a Husqvarna design that undergoes CCM’s own development and changes and as you would expect from the bikes Husky makes, it’s not sedate in the way it delivers its power. The 600cc single uses Mikuni injection and with 12:1 compression, a snap of the throttle quickly has the front end in the air, she’s a hooligan in the best possible way. It wants to rev, but it also has great torque with 58nm, so it’s perfect for urban warfare. Of course, Ant being the man he is, wanted more power and more noise and the 2-into-1 stainless exhaust system, with an SC Project end can under the seat delivers that in spades.

With a final weight of 110kg, more power than you’ll ever need and with looks to kill, the Partridge Design/CCM collaboration has all of the quality custom cool you’d expect from a builder like Ant, with a high-end level of fit and finish. Sadly for the man himself, it’s time for a new owner, and Collecting Cars will have the honour of selling the bike. “It comes with all the OEM keys and paperwork from CCM, the buyer will be the first registered owner apart from CCM as it was registered by the factory so it was road legal to ride on the road for the filming of the TV series.” She’s a naughty little thing and there is nothing else out there like it, come on, you know you want it.