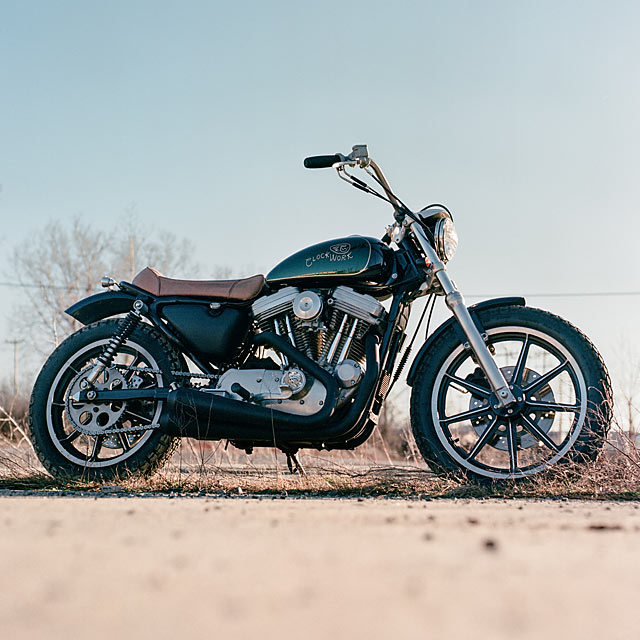 I recently pulled my old turntable out of the garage and got it up and running again. A new needle and belt, some dust removal and a few solders here and there and suddenly I’m rediscovering a wall of vinyl that hasn’t been played in many, many years. It’s easy to forget just how much great music was recorded in the 70s and 80s. You could dismiss the era as wall-to-wall makeup and silly hair, but a closer inspection will reveal some amazingly inspired, and beautifully timeless work. Sam from Canada’s Clockwork Motorcycles has taken a similar approach with his latest build – a retro Harley Sportster with all the right influences. “I sold my personal bike and first build last year,” says Sam. “It was a Honda CX that I had turned into a little scrambler. I had this bike for a couple of years, so it was not easy to let it go, but it was time. I secretly wanted a Harley since a little while and when I saw this super clean, stock 1993 Sportster I pulled the trigger.”

As the owner of a shop who’s working weeks on customer’s projects, it is not easy to find time to work on personal ones. But when he finally did, Sam says that the goal was not to build a show bike for the company, because he knew he didn’t have the budget nor the time to do the idea justice. “The goal was just to build me a reliable and comfortable daily rider,” he smiles. “Even before I bought the bike, I had an idea of the style I wanted. I was really excited to build my personal bike, because it’s a great chance to show where I am right now. Often customers come to me because they want something in a style I’ve done before. Now there’s nothing wrong with this, but sometimes you want to move forward.”

Sam wanted to keep the roots of the Harley brand intact and took inspiration from the best parts of  what was done in the past instead of reinventing it. He’s clearly also a big fan of the Japanese Harley scene. “They have a great style and a good eye for building bikes with nice lines and details,” he remarks. “But principally, they do it while showing a real respect for the brand and its past.” He started by removing all the things he knew he wouldn’t need, then he found a Superglide Shovelhead tank from the 70s with a shape that was perfect for the project. “I mounted it to the bike as low and close to the engine as I could. I wanted a straight, horizontal line flowing through the bike, so I brought the rear end a little higher with a pair of longer shocks from a vintage airhead BMW.” Next step was the rear wheel. Sam wanted the bike to look lighter and slimmer, so he ditched the 16″ rear wheel and the wide tire for an 18″ from an Ironhead Sportster while keeping the 19″ front that was already on the bike. Since the vintage flat track bikes were also an inspiration for the project, he went with the classic Dunlop K70 tires, with a 4.00-18 rear and 3.50-19 front.

‘“For the rear end, I cut the fender struts close to the shock mounts and fabricated a tail hoop to close it off. I then made the rear fender, keeping it high and with a practical length. For the seat, I took inspiration from Harley KHs from the 50s and vintage Bates-style seats. Then I fabricated the seat pan and brought it to Rod Alves who wrapped it in a nice, natural tan leather.”

“To complete the overall shape, I bent a handlebar in a vintage T120 Triumph style. I got rid of the stock switches and levers, reduced the wiring to a minimum and installed a Posh Japan switch block with internal wiring to control the mini bullet turn signals and starter.”

The clutch lever is from a K-model Harley and the master cylinder is a Honda dirt bike unit that Sam bored out to fit a 1″ bar. He then shaped the brake lever to match the K model’s look and added a throttle grip from an Ironhead Sportster. To finished it up, a machined aluminum mirror from Pangea Speed was bolted on. “I kept the 883 engine stock (for now), but I got rid of the heavy exhaust system. Instead I built a 2-2 exhaust, keeping in mind the old-school tracker theme. To complete the engine’s look, I brushed all the aluminum parts of the engine and got a brushed aluminum air cleaner from a man I respect a lot, Kim Boyle from Boyle Custom Moto. He’s also responsible for the custom off-centre tail light.” The final touch was the paint. Sam kept with the vintage theme and got painter JP Huet to apply a killer green from the House of Kolor. It was topped off with some subtle black shading and gold stripes. Then good friend and graphic designer Raff Labrie helped him with the Clockwork logo. “I’m really happy with the result,” says a grinning Sam. “The bike has a great feel to it and it’s real fun to ride. I’ve got to say, I fell in love with Harleys doing this, and it’s certainly not the last one going out of this shop.”