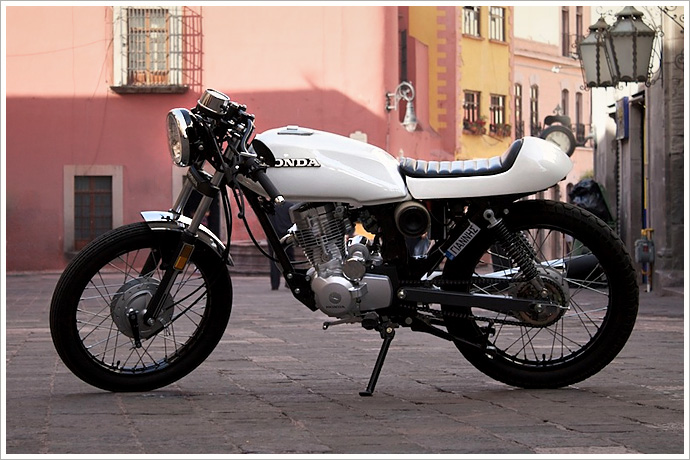 Families. One of those things in life that are completely unavoidable. Like death and taxes. And Kim Kardashian. Unless you were begat from a set of robotic loins, you’ve probably got you own. They fight and they scream. They mock and they cry. They drink too much and they embarrass you when you bring home a new ‘friend’ to meet them. And then they go and take a photo of you with your pants down that time you all went camping when you were 12 and it was so obvious that you had pulled a muscle in your groin but they all insisted you were doing something gross with a sock and a some lip balm and then they go and show the picture to everyone you know. It wasn’t me, though. It was a friend of mine. No, really. But after all the crap and the tears, they then go and do something that just transcends all the frustration and the bad blood. Like buy you a motorbike… “Hello Pipeburn community! My name is Juan Francisco, I’m 20 and live in Querétaro; a small town near Mexico City. I have been wanting a motorcycle badly since I can remember but it was until last summer when I finally decided I NEEDED one but had no money. A quick call and I convinced Alexandra (AKA my cousin) to lend me some money to buy a bike, modify it and ‘sell it later’. She thought it was a really good idea and had nowhere else to invest her hard-earned money so the next day I went to the dealer and bought a brand new Honda CGL 125.” “I rode the bike home and immediately started to strip her to the frame and see what I could do with her. For the following months I worked on the bike in my garage until I was happy with what I had created. The bike has motocross bars turned upside down, cut front fender, an OEM Honda speedometer which (strangely) is new and belonged to a chopper but has the vintage look I was aiming for and a bunch of created-by-me bits like a custom battery mount, mirror, led tail lights with integrated turn signals, fiberglass seat and (my personal favourite) a modified high flow air filter that works as some kind of resonator because the bike sounds awesome! Finally I hand painted the emblems to match the rest of the bike.” “You don’t see a lot of cool bikes in Querétaro and my bike is probably the only cafe racer in town so it turns a lot of heads considering its humble ‘working horse’ origins.” “Unfortunately the bike needs to be sold, but it has caused such an impact that I decided to start my own company called ‘CRQ Cycles’ to cover all the café racer needs my country requires. Finally I’d like to thank everyone who helped along this build but mostly Mónica Chehaibar for the photo shoot and Alexandra my cousin for lending me the money to start this all. I’m quite happy with the results of my first bike.”