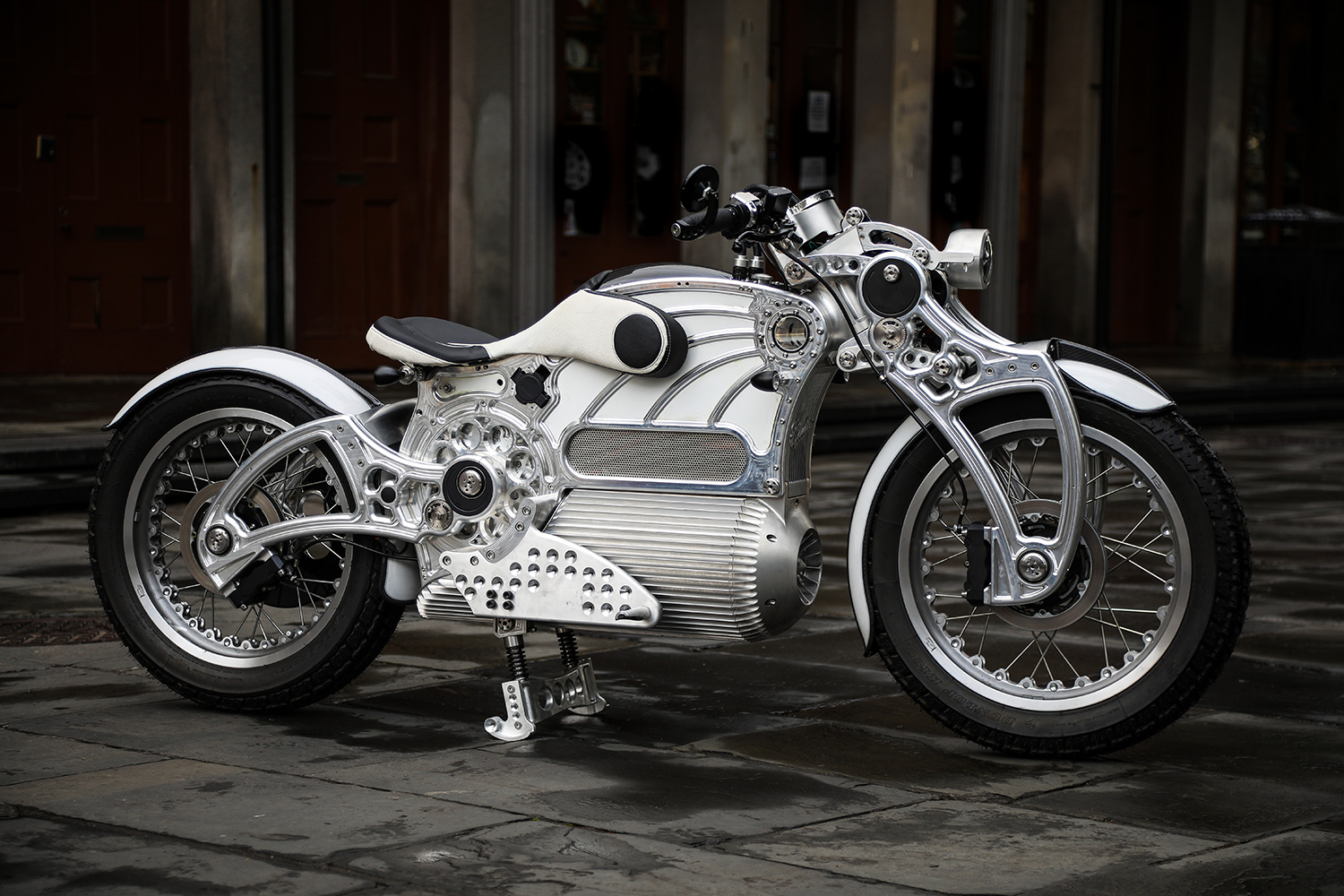 We caught up with Founder and CEO Matt Chambers about his new venture Curtiss Motorcycles. Having been at the helm of Confederate Motorcycles for almost two decades, he decided it was time to go back to the drawing board and start from scratch – building the ultimate electric motorcycle. He may have swapped combustion engines for batteries, but his radical designs are still aircraft inspired, billet machined and as polarizing as ever.

Can you introduce yourself to our readers?
I’m Matt Chambers, Founder and CEO of Curtiss Motorcycles. We are on a mission to lead a new golden age of true sustainability by designing and crafting the world’s best and finest electric motorcycle designed and made to last forever.

Is Curtiss Motorcycles the new electric Confederate Motors?
No. Confederate was to Harley what AMG is to Mercedes. Curtiss goes back to first principles. Curtiss is an innovation and advanced design brand formed to reinvent motoring on two wheels from the inside out.

You can see the Confederate DNA in the Curtiss designs. How did JT Nesbitt become involved?
We had a great team, I thought JT would make it perfect. JT had worked for Confederate a while back, and we worked well together and designed some great motorcycles. I offered him the opportunity and he accepted. The work speaks for itself.

The company is named after the legendary Glen Curtiss. Why was he so inspirational to the new venture?
The reason for this is context. Glenn Hammond Curtiss is the greatest and most daring innovator in the history of the motorcycle. This makes the Curtiss marque the greatest of all for the new and better age of the LEV. The brand illuminates, informs and nurtures our clean sheet 1st principle originality approach to re imagining the motorcycle in a better way.

You’ve mentioned ‘The One’ has the “most perfect state of balance of any motorcycle in history.” That’s a big claim. What makes it different?
The CPA; our patented Centered Power Axis advanced design. It is our principle innovation. It uses the strongest part of the motorcycle, the massive splined hard-steel axle, to perform two key functions: It serves as the drive shaft of the powerful electric drivetrain adding outer-bearing support surface area and the swingarm pivot at the same time. This proprietary solution offers part-count reduction and ease-of-assembly.

The design also eliminates a weak stub-axle swingarm pivot, providing strength and longevity to the design. Splined drive plates perform double-duty, front and rear, providing bearing surfaces on the drive-side of the system. The Centred Power Axis allows the engine to be placed directly on the vertical plane of the rider, and facilitates the rear suspension to pivot at this point. This leads to increased harmony in balance, an elevation in comfort, and significant improvements in handling. The Curtiss One is the only motorcycle to employ the Centered Power Axis, and is therefore peerless.

With noise, vibration and harshness removed, balance is illuminated. Curtiss architectural symmetry idealizes balance. The effect is greater precision and control nurturing confidence that results in making you a better rider.

Must be amazing to ride. Can you describe the feeling?
In the city, you feel omnipotent; on a back road you feel like you’re flying on a magic carpet.

Will all future Curtiss motorcycles use the same platform?
Yes, Curtiss One platform architecture is completely modular and will be the basis for all Curtiss models.

Have you already designed future models?
Yes. Because Curtiss One platform architecture is so modular, we have been able to work quickly in preparing our portfolio expansion.

The design brief which was written by JT is quite extensive. Apart from the balance and symmetry, what are the other main things that set Curtiss Motorcycles apart from other electric motorcycles?
The aircraft inspired triple load path billet machined monocoque, the immersion battery, radiator, backbone innovation, the multi link carbon fiber fully analog adjustible long travel suspension system, the most power-dense power-train ever created, the highly efficient effortless axial flux torque delivery system and the classically timeless proportion and ageless operating capability of a machine scratch built to last. The engineering on ‘The One’ is to a level not seen before.

How long has it taken you to get to this point?
Seven years with Curtiss, although twenty years of previous experience designing and delivering 1300 unique high spec low volume motorcycles developed a wealth of knowledge that aided us in our adventure.

What has been the biggest challenge designing and building ‘The One.’
Creating an honest Curtiss. We started from scratch. The sky was the limit. Creating an LEV contextual and honest to the Curtiss brand and Glenn’s legacy, was the greatest and most important challenge.

Battery technology seems to be moving at a fast past. Every year the batteries are getting smaller with a longer range. Do you think this will affect the design over time?
One life; One bike! The dream is your Curtiss lasts forever. You leave it to your kids. It gets passed along. It improves with age. Over time, your Curtiss becomes priceless. Curtiss Power Packs are infinitely upgradable due to their modularity. We simply replace the cells as technology improves. In five years time, ten years, your motorcycle will have more power and great range. Your motorcycle gets better over time. Our design is future-proofed.

It’s a known fact that electric bikes are incredibly fast. How quick is ‘The One’?
In real world terms, it is as it feels in the city; omnipotent. At present have limited the bike to 120mph.

Are the bikes built to order? Where are the built?
In our New Orleans studio and in our factory in Leeds, Alabama.

Can customers make modifications to their orders? Color changes etc?
Granular intense personalization is a given, as our customer commands. Work of Art Edition offers endless possibilities. Customers will work directly with JT to create their greatest and most personal expression.

It feels like an exciting time for electric motorcycles. Like when the internet was still in its infancy. Will we all be riding electric bikes in 10 years?
We will, and they will feel like the Curtiss One feels now. This is a positive because in our opinion, electric is better.

What’s next for Curtiss Motorcycles?
Riding; lots of riding. Validation and certification is underway for The One. After that, we build 60 units a year for three years. Then, the portfolio expands dramatically.

When can we ride it?
Soon. We complete validation and enter production later this summer.