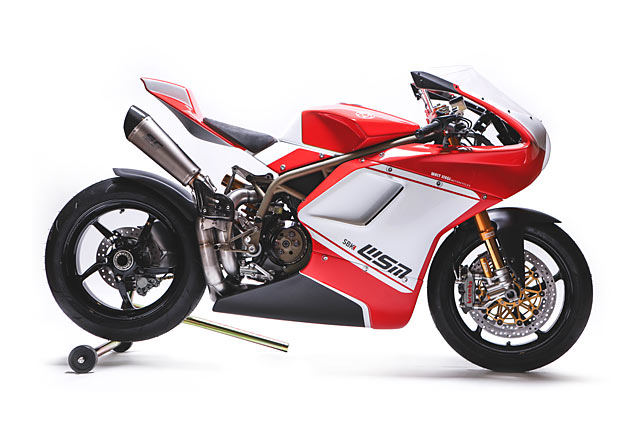 While factory sportsbikes and the Superbike World Championships aren’t our usual fair, there’s one thing we’ve learnt from the many years of doing what we do. When a customiser like New Hampshire’s Walt Siegl drops a build designed to slug it out with the formula’s best and brightest, you sit up and pay attention. And boy, are we glad we did. Built from scratch around a four valve Ducati 1098 power plant, Siegl has again wowed us with his passion for moto racing and his ability to build light speed bikes that never fail to impress. 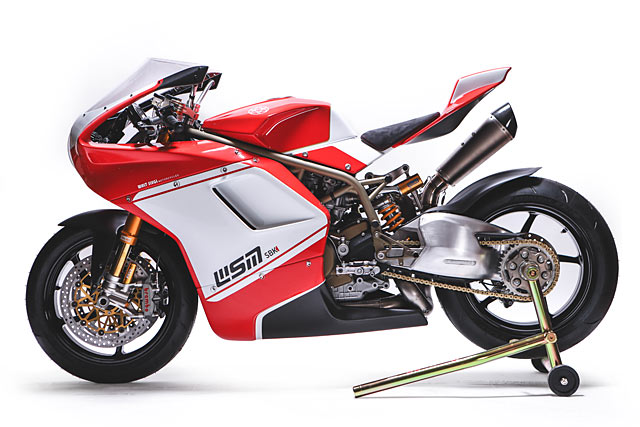 Walt’s 2018 schedule speaks volumes about his commitment to his art. “I’ve just completed two SBKs – this one and a two-valve bike in blue – and I’m also working on a third one. I’ve also been working through completing a Ducati bevel for the Haas Museum in Dallas, building another Bol d’Or, a Leggero, and an Adventure. I’m also starting to sink my teeth into the first set of WSM electric motorcycles.” Committment, or obsession? Either way, it seems that it’s the custom bike fans that will be the winners here.

The acronym-lovingly named ‘WSM SBK’ started with little more than a good condition Ducati 1098 four-valver and Siegl’s very vivid imagination. From there, the rest of the superbike was constructed around the powerplant in a process that’s probably better described as ‘bike design’ than ‘customisation’. Ever get the feeling someone’s a the top of their game? 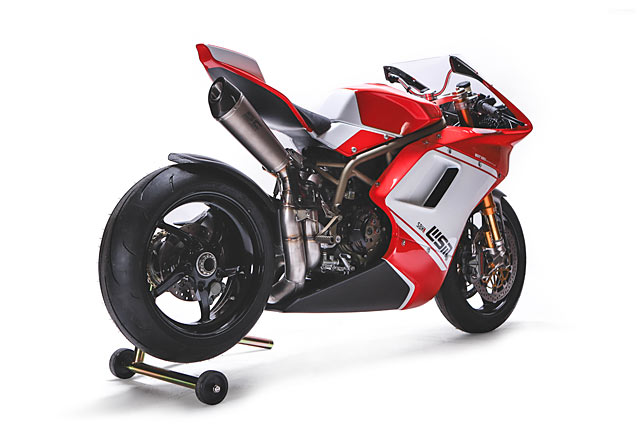 “It was a natural progression,” says Walt from his New Hampshire base. “I’m just going from building bikes with Ducati two-valve air-cooled engines to finally adding a high performance liquid cooled four-valve Ducati engine to the WSM collection. I wanted to build a completely new bike around this powerplant, with as many of the components built in-house at WSM as possible.” And for all the other components Walt needed, he wouldn’t be content with just any old parts; he went to the toppest of top shelves for everything.” Of course, that meant that he needed a completely new frame – and one that would be up to the strains and stresses of WorldSBK racing.

But after so much success with the two-valve Ducati donks, he was reticent to ignore them completely. “That’s because me and many of my clients like it so much. So I designed a perimeter frame with World Superbike geometries that could hold both the four-valve and two-valve engines. The combination of suspension components and geometry numbers is fully adjustable and allows you to go easily from street racer to a really quick-steering scalpel for the race track.”

[superquote]“Ducatis are kind of tender but very powerful at the same time. They talk to you. They have a way of needing your attention when you ride them.”[/superquote]

“With this Superbike I wanted to hold on to what is so dear to most Ducatistas: the trellis frames, the rattling dry clutches, and the torquey thrust of the long stroke motors. It’s a fantastic, visceral experience. Granted, all this involves the rider much more than other brands. Ducatis are kind of tender but very powerful at the same time. They talk to you. They have a way of needing your attention when you ride them. They make you feel good. So I wanted to hold onto all of this.”

As with every WSM model, Walt says he is actively trying to bridge the gap between classic moto design and modern moto technology. “The design of this machine shows my romance with classic race bikes blending – I hope seamlessly – with modern engineering and design. And since I designed this bike from the ground up for high-output engines, our wiring harness had to include all the electronic necessities for controlling the power on the street and on the racetrack.” That meant accommodating a traction control and a quickshift system were a must. “The ECU is fully programmable,” continues Siegl. “It can be set to whatever the engine design and exhaust configurations are.” 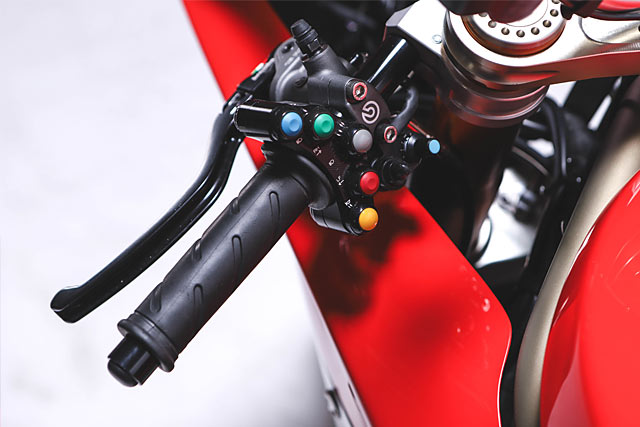 “It was paramount for me to build the bike as light and as strong as possible, and with as few parts as possible. For example, most bikes have a steel subframe and a separate seat and tail section. The WSM SBK subframe and tail is one unit, made out of structural carbon fiber and it weighs in at 1.8 lbs, or less than 1 kilo. The carbon fiber bodywork weighs 9 lbs. To even further save weight, we designed an air-intake system in carbon fiber instead of injection-molded plastic and the floor of the tank was designed in such a way that it also functions as a lid for the airbox. The finished product you see here weighs in at 150 kg/340 lbs.” 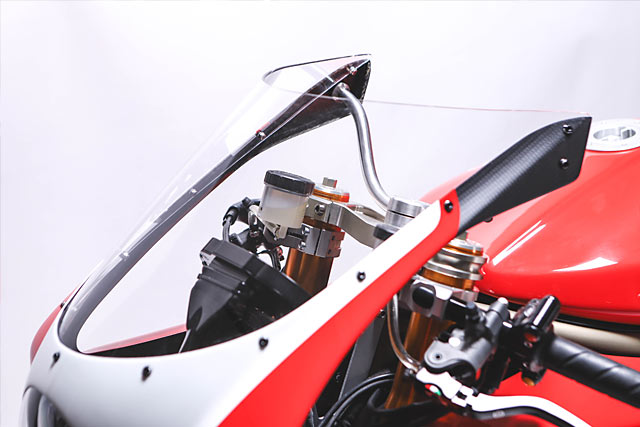 Walt reiterates that one of his many goals here was to design a truly special machine that encapsulates traditional European motorcycle design, its racing heritage and all the powerful emotions that comes along with that. “Riding the bike tops it all off; It behaves so differently than your typical showroom bike. It is so agile and easy to steer without feeling flighty. At the same time it’s quite comfortable, which really caught me by surprise on my first test ride.” Clearly, all his painstaking considerations for the ergonomics really paid off. Likewise the weight saving efforts. “It’s noticeable not only with the way the bike steers and feels under you, but also how well the brakes and suspension translate and how effortless the acceleration is. The experience is supremely visceral.” 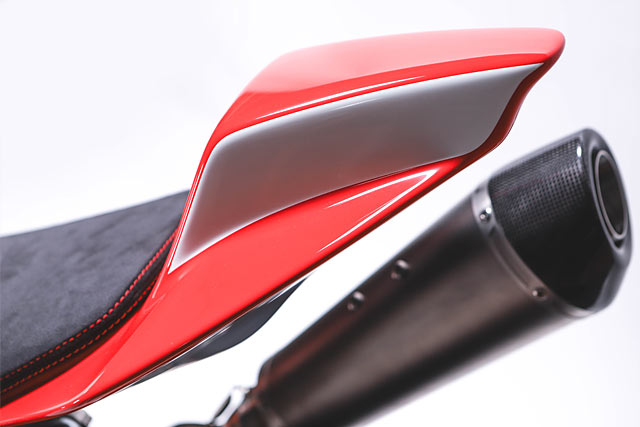 Consulting the now drool-covered spec sheet supplied by Walt reveals the lengths the man went to to ensure the bike really did have the best of the best. From the Ohlins FGR World Superbike forks and WSM-spec Ohlins TTX shock to the WSM Race Spec harness, racing dash with data acquisition system and the OZ Racing wheels with Dunlop Q4 tires, it’s clear this bike wasn’t built to a budget. At all.

“My ambition to build a true WSM Superbike asked everything of me and tested the resilience of my business,” concludes Walt. “And I cannot emphasize strongly enough the dedication and knowledge of the WSM team. Without Aran, Brian, and John this project would not have happened.” 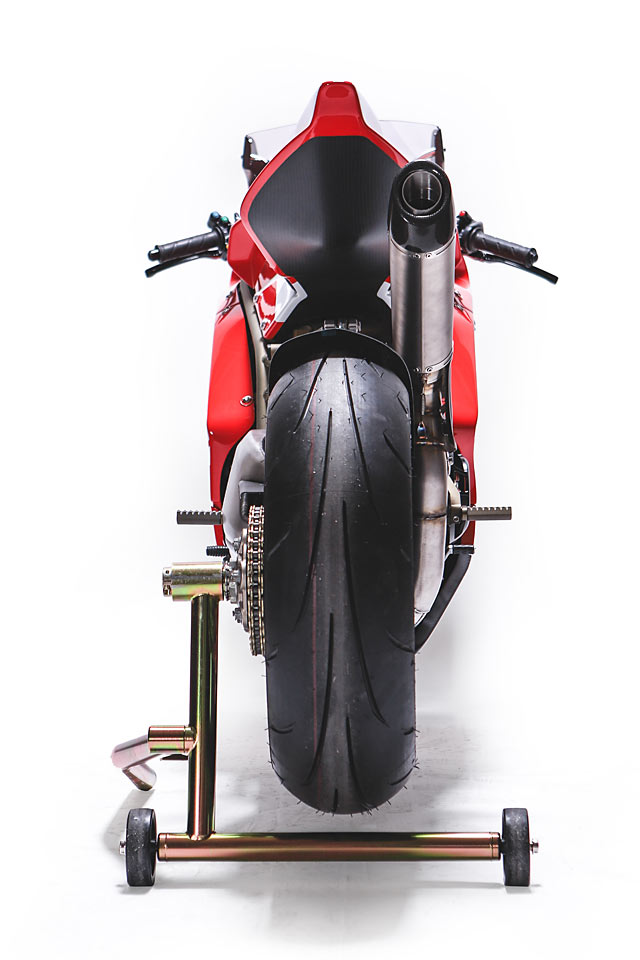