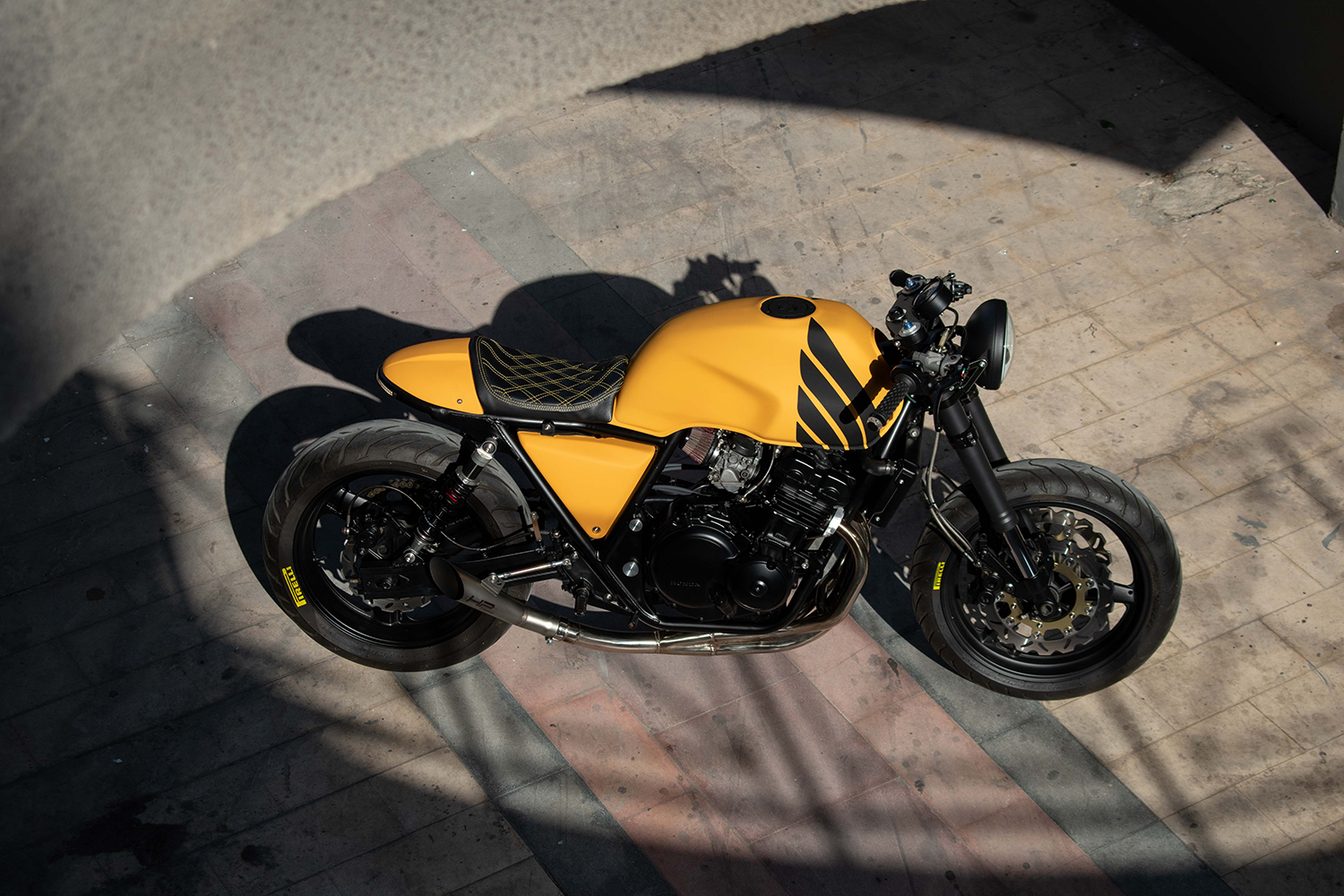 The introduction of the Universal Japanese Motorcycle into the global marketplace transformed the two-wheeled industry in a way that no other moment has. Cheap, reliable and easy to ride, they became the thing to have and with good reason, from a Kawasaki Z1 to a Honda CB250, there was something for everyone and the price was good too. The ’70s and ’80s saw the big Japanese companies dominate the industry with one hit after another. So you’d have thought the exceptionally well-made CB400SF would have been a global hit for Honda, but arriving in 1992 it had missed the boat and it seems it’s been largely ignored by customisers too. Not Underground Custom Cycles from Cyprus, however, who saw the amazing potential and have turned out this absolute peach.

Initially, the CB400SF was only available in Japan and offered a completely modern update over the old CB400F with its distinctive exhaust. But the new model was soon sought after by Honda dealers in places like Australia and they became the most high-quality machine available to learner riders limited by horsepower restrictions. Built to a standard beyond anything else in its category, the CB400 soon had ABS, the revolutionary VTEC system and a class-leading horsepower figure from a smooth-revving four-cylinder engine. The competition often had half the power, nothing like the build quality, but importantly for that competition, it could be as little as half the price.

Now, however, prices are much more affordable in the second-hand market and a biker who had picked up a bargain saw them come to Petros Louca at Underground Custom Cycles for a transformation. “The CB came to the garage in 2020 for carb repairs as the owner bought it as an unfinished project, the owner’s plan was to build it alone in his garage. In 2021 the owner decided to bring the bike back in order to finish the project, the plan was to build a café racer. The owner’s only request was to be involved as much as possible in the process (also new for me, I am not used to working with owners of the bikes I build) but nevertheless an extra hand is never a bad thing.”

Together they would take on the task of completely transforming the CB and it was an enjoyable process for Petros, not having worked on the platform before. To start they decided to strip the bike back, unfinished projects have a way of hiding gremlins and they wanted to avoid nasty surprises. The bare frame on the bench, the subframe was cut off and a shortened hoop fabricated that’s also been notched for the 3-into1 taillight. Then the frame and swingarm were sandblasted and back to bare metal it could be first examined for any cracks or rust, and then sanded smooth for an as-new appearance.

The chassis and wheels were then sent out for powder coat, the perfect way to finish off these key components, with a coating that will last a hell of a lot longer than paint. The shortened subframe offers superior looks, but it also creates a challenge, with far less room under which to store all of the electronics. But this didn’t worry Petros, the experienced builder setting about crafting a seat pan with an incorporated electronics tray, that makes maximum use of the real estate available and also delivers an ultra neat finish. Speaking of neat, the seat has been brilliantly stitched together in a mix of black leather and colour-matched thread.

As the builder was turning his attention to the bodywork, the owner was trying to pick a colour, and when he saw a Roeg helmet out one day on another rider, he’d found his hue. A Roeg of his own was purchased and the sunset yellow colour was mixed up at the painters, who laid it down on the tank, all-new side covers and the custom-crafted rear cowl. Some matte black graphics sets it all off and as much of the bike as possible has been repainted in a frame-matching finish to ensure the cohesiveness of the appearance.

For what Honda marketed as an entry-level bike, the suspension and braking are excellent from the factory, but Petros still wanted to make significant improvements. The chassis responds well to these upgrades and the first of them is a full Yamaha R1 front end, which is installed to perfection with a machined upper clamp and tapered roller bearings. To ensure the rear end is just as plush, a set of custom spec YSS rear coilover shocks get the job done. The brakes are all rebuilt, the fronts are now the big R1 items and braided lines connect to a Brembo master cylinder.

The bike also runs a hydraulic clutch with its own Brembo combo on the clip-ons and this ensures high-level operation and feel for the rider at the lever. Peak power from the Honda comes at a soaring 11,000rpm and a set of pod filters let you hear the scream when the VTEC switches to the second set of cam lobes. To push power over 65bhp, a full exhaust with slash cut H2 muffler joins rebuilt and rejetted carbs. To finish out the project Petros rewired the entire bike and built the loom around a Motogadget m-unit, with Motone switch gear.

The finished bike not only looks fantastic, but it does absolutely everything a motorcycle should do very well. I can just imagine the Honda engineers giving this custom by UCC a big tick of approval, and that’s serious praise indeed.