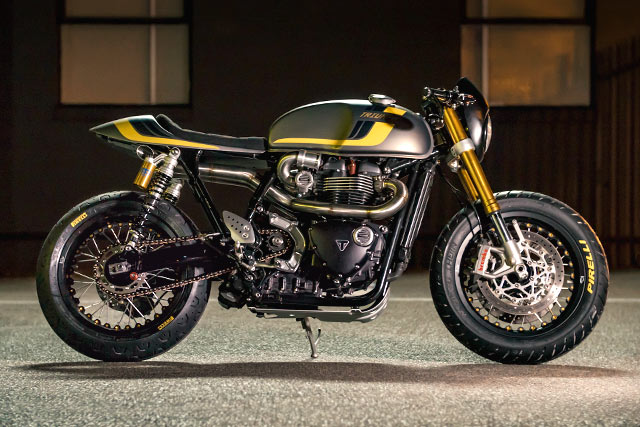 For something to be reborn first it must die, and this particular ghost who walks lived a very short life before it was resurrected in just eight tumultuous weeks. Whatever perfect product you buy, the end result is a culmination of blood, sweat and tears that the consumer is never likely to see. But prepared to let the masses get a glimpse behind the scenes Australia’s premier custom bike builder, Wenley Andrews has pulled back the curtain and revealed the alter at which he works. Making this process even more special is the collaboration that made it happen; a collective of the Australian industry’s very best. The incredible finished product was finished just hours ago. A Wenley special, this 2016 Triumph Thruxton R racer is known as the one who cannot die; the ‘Phantom’. Fortunately Pipeburn.com has been there from the very beginning and instigating the build was site co-owner Andrew Jones who was in Wenley’s ear asking when he’d build his next bike. The builder didn’t have any solid plans for the future but Andrew had an idea. With readers fawning over Wenley’s Triumph builds such as his Dirty Rascal America and powerhouse Rocket III, surely next should be the latest Thruxton R. Pipeburn’s bearded baron got to work and with a ‘special deal’ from Triumph Australia, Wenley was now the owner of a Diablo Red Thruxton R and a big box of parts. But that was just the start of the collaborations; with the Sydney street party known as Throttle Roll just eight weeks away all involved set it as the place to launch the R. The organiser of the event Mark Hawwa dug it and being the brains behind the Distinguished Gentleman’s Ride you know he hosts a hell of a party. With Wenley not having regular digs out of which to operate, Jason of Gasoline Motor Co. generously offered up a workbench and use of the shop in which Wenley could wave his wand. Finally to capture the highs and the heartache, talented documentary maker Cam from Stories of Bike came on board to shoot an eight part series on the build. Now with everything in place the pressure fell squarely on Wenley’s shoulders and all the talent in the world can’t help you overcome slow deliveries and unreliable suppliers. The vision was to leave the original frame, engine and suspension in place and from there use the R as a platform for customisation. Put simply, take the very best of what Triumph has created and enhance everything else. Having considered a tank change, with the Thruxton now in front of him Wenley was so impressed with the job Triumph had done he couldn’t bring himself to change ditch it, “Triumph have really done a remarkable job and given the public a true café racer,” enthuses Andrews. But the seat was another matter; wanting to create a more minimal, racey vibe he placed an order for three different units. Two never arrived and the other, big and ugly, just would never do, so instead he fashioned his own fibreglass masterpiece with painstaking perfection. When designing the seat Wenley had in mind his ever-present big rear tyre, “so it would be further accentuated and the proportions better reflected by a narrow seat,” explains the man himself. In total 10 days of sanding, sculpting and finessing delivered a stunning result and then it was out with the pen to design a base. The upholstery was handled by the clever folks at Sydney Moto Trimmers using premium Alcantara and paint matched stitching. The inspiration for the paint came from Wenley’s daily walks up to a nearby Vietnamese restaurant for lunch. Each day he passed a stunning AMG Mercedes resplendent in Selenite Grey with Yellow accents, “it looked magical”. So he had to have it and with the stock tank off and his new seat boxed up they were sent out to Smith Concepts to lay down the colour. With no time to waste Wenley got to smoothing out the frame, de-tabbing and happily taking a grinder to Triumph’s big dollar machine. With the seat and tank bolted back in place the look is incredible and you have to wonder how long it’ll take for Hinckley to offer it up as a factory option. With only eight weeks with which to work, ripping the engine out in the pursuit of huge horsepower was never an option. But the torque laden 1200cc twin was a prime candidate for one of Wenley’s signature exhaust systems. It’s out with the old ’60s styling and in with a modern system built by the man himself that snakes its way through the frame and exits with mean twin pipes underneath the seat. This meant the stock airbox had to go and there was no longer room to even fit pod filters to the carby look EFI system. The solution is a pair of stunning velocity stacks that peak out each side, facing forward to thrust air down the Triumph’s throat. Wanting to add some mechanical muscle the sprocket cover was removed and a new piece CNC’d that exposes the gnashing teeth. The suspension on the Thruxton R is as good as it gets from a modern retro machine and there was no need to change it. But nothing stays stocks were an improvement can be made and the rear Ohlins shocks have their springs finished in black with flexible plasticised paint. Up front the big piston Showa forks remain in place but Wenley removed the upper clamp, cut off the key holder and powder coated it black for a stunning finish. The same hard-wearing powder was applied to the factory swingarm for a more integrated look with the frame. The big factory Brembo’s haul things to a stop and are actuated by a set of custom adjustable levers. [superquote]“An order was placed with the kings of electric minimalism, Motogadget. ‘One of everything’ was the instructions.”[/superquote]

With a striped down, nimble appearance always part of Wenley’s builds an order was placed early in the process with the kings of electric minimalism, Motogadget. “One of everything” was the basic instructions with a Motogadget speedo sitting neatly behind the repurposed Harley Davidson front cowling. But despite having switches, grips and bar end indicators in his hot little hands they wouldn’t fit the new clip-ons. That’s because Triumph’s all new ride-by-wire system is operated at the throttle assembly itself. With the part disassembled it’s been hidden under the tank, with a traditional cable run to it from the handlebars. It seems a lot of work for a cleaner looking front end, but our man Andrews wasn’t finished there! The wizard Wenley then ran an internal throttle cable and yet still managed to fit the Motogadget m-Blaze turn signals to the end of the bars. Some tricks will never be revealed! But the pièce de résistance has to be those incredible Kineo wheels with Ad Hoedemakers of EuropeMotoParts.com sorting out a special package just for the Phantom build. Measuring 17 inchs at each end, the rear wears a monstrous 180 section Pirelli Phantom tyre. While up front a meaty 130/80 Pirelli couldn’t be any tougher surrounded by the best from Brembo, Showa and Kineo. Racing to the finish and set to debut in just hours’ time at the Throttle Roll Street Party in Sydney I ask Wenley what’s been the biggest challenge of this last eight weeks. “The hardest part of the build was the people criticising me. In fact I wouldn’t even call this a build, but a re-imagining of what Triumph first created.” But for Wenley what was being criticised was the very point of filming the process in the first place; highlighting the struggles that other shows like Biker Build Off simply edit out. Parts that don’t fit, suppliers that let you down, mechanical mysteries and all the while carving out fresh ground, it’s just part of the process the public don’t ordinarily see. He may not have sworn an oath on a skull, but Wenley Andrews has emerged from his urban cave having built the best Thruxton R to date in a time as quick as this Phantom goes!