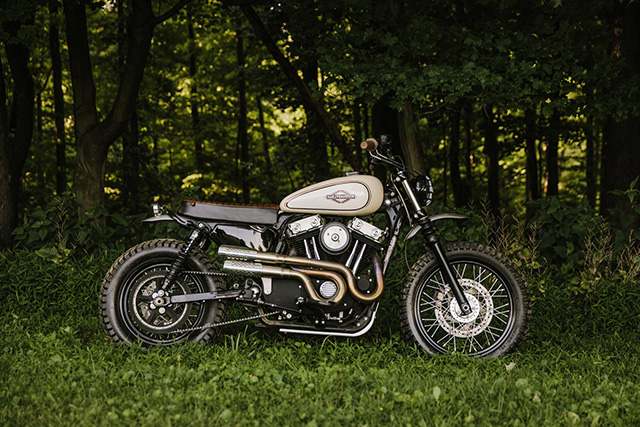 Words by the builder Kurt Diserio | Photos by Alexa Diserio

When you think of a scrambler motorcycle, the last thing that probably comes to mind is a Harley-Davidson. With Triumph and Ducati both using the term as the name of two popular current models, it can be a little confusing these days what “scrambler” actually means. Although, a quick search through internet land proves that the label has always been somewhat complicated. Let’s jump into the background of this unique style and the reason I went in this direction after acquiring a totalled 2015 Sportster XL1200. 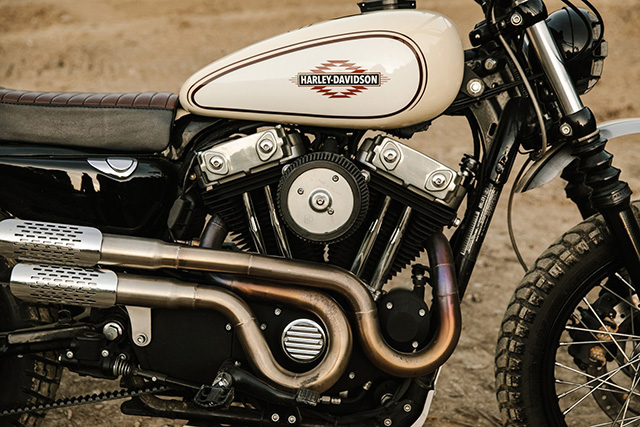 The history of the scrambler label dates back to the 1950s and 60s when it was used to simply describe a street motorcycle that was also used for off-road riding. Essentially, scramblers were the first dirt bikes, built to be lightweight with higher ground clearance and longer suspension. Enthusiasts during this time would take street legal bikes and modify them for rough terrain or track racing. Eventually they were phased out when manufacturers started making motocross bikes, which were much more practical and came in various engine sizes better suited for competition. 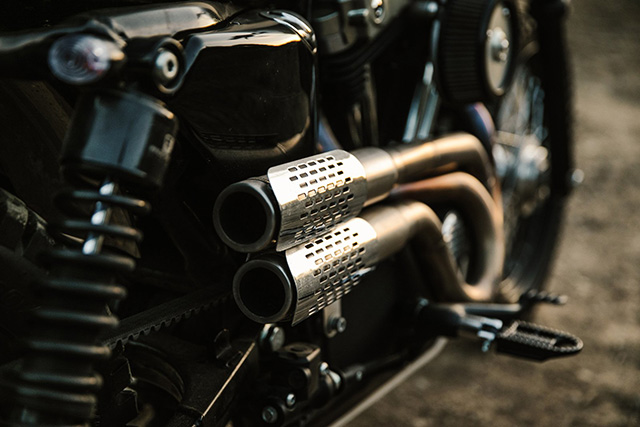 The definition of a scrambler is a little different today. While it’s still comparable, let’s get real. You’re much less likely to take a scrambler off-roading on a normal basis, and you sure as hell aren’t using it to challenge your buddies on modern day race bikes. If a person truly plans on riding off-road, they’re wise to choose a more appropriate street and trail motorcycle such as a dual sport, adventure bike, or even a street-legal dirt bike. That doesn’t mean that scramblers still aren’t attractive to build. In fact, they’ve become very popular again—just look at the lineups of some major manufacturers. 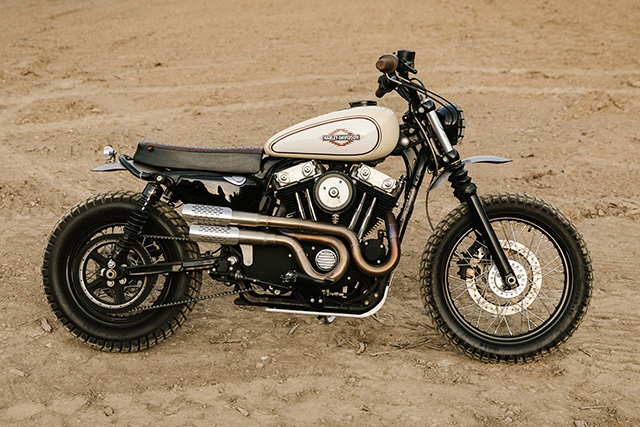 Much like building any custom bike, a scrambler now has a lot less to do with functionality than it does with character and design. Plus, they’re just really fun to ride. In my case, motocross and trail riding were basically all I looked forward to when I was younger. Those carefree years have faded away now that I’m older, out of shape, and stuck behind a damn computer screen most of the day. So, when I came across the opportunity to purchase a wrecked Sportster 48 a couple of years ago, the immediate idea was to dig into those off-road memories and build it into something that resembled an old race bike of the past. 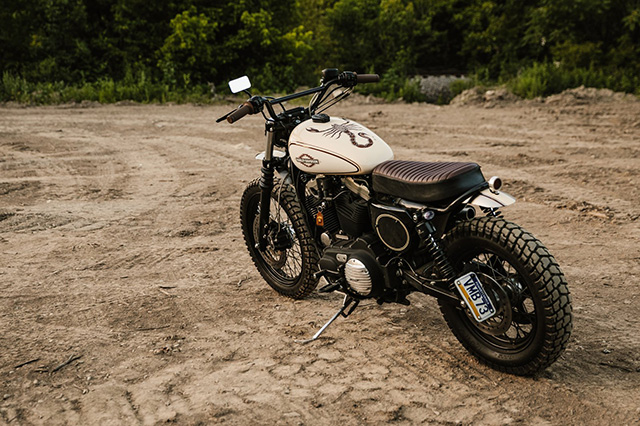 My father, Paul, and I worked on the project in the old shop space we used long ago when trying to get a two-stroke engine off the line a little faster or hook up in corners better. The time spent together on this Harley brought back many memories I had before racking up the concussion count. My goal was a desert racer theme with a taller, more aggressive rider position that started with extended shocks, Burly Brand handlebars, a larger fuel tank, and a one-off raised exhaust system by Iron Cobras Fabrication in Long Beach, California. Some of the more prominent pieces are the PIAA halogen headlight and raised front fender that were surprisingly a real pain to get mounted correctly. Without straying too far from the traditional look of a Sportster, we chopped off the rear frame bars and welded in a loop before attaching a thin metal fender similar to what you might have seen on the old Honda Elsinore or Husqvarna motocross models. After my failed attempts at fitting a proper seat, Chappell Customs in Nevada crafted a special two-tone raised seat that we customized to work. 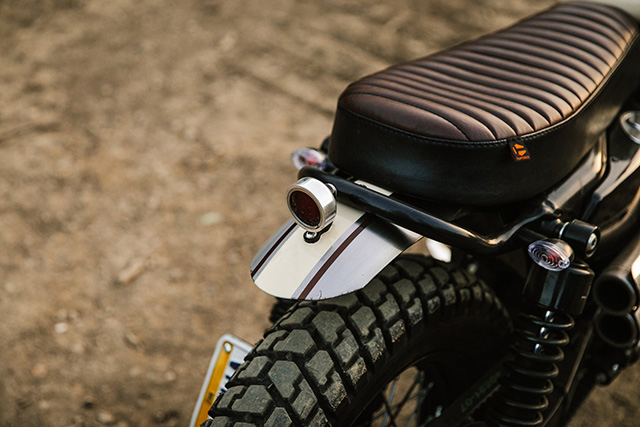 The paint was done in house. To achieve the right look, I went with a classic brown and white theme, then added a scorpion on the tank because why not. If I had one recommendation for anyone that wanted to paint tanks or helmets, it’d be to get a super clean environment. Using the corner of an old fabrication shop proved to be quite tricky when tiny dust particles or bugs continuously ruined what we thought was a perfect coat. 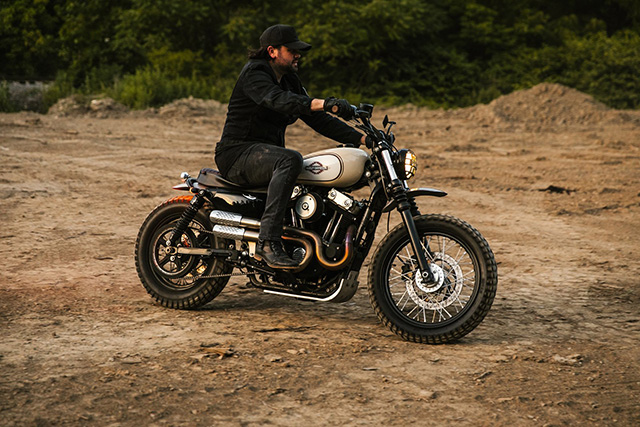 I was very happy with how the bike turned out when it was finished. All of the fundamental elements of a versatile scrambler were combined with the reliability of a modern Sportster. I wasn’t used to working with a fuel-injected bike but will admit that it’s super handy having in the garage as a consistent alternative to my choppers. People have asked me about taking it off-road, and while it’s been fun slinging it around in the dirt, the Desert Rat still weighs a little too much and is geared too high to truly get wild on the tight trails around our area. Who wants to join me on a trip out west to the open desert? 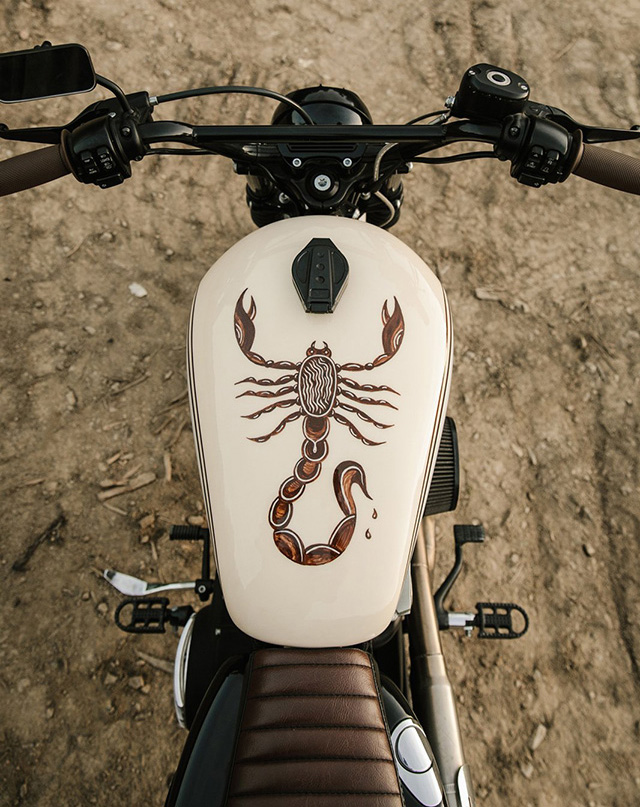 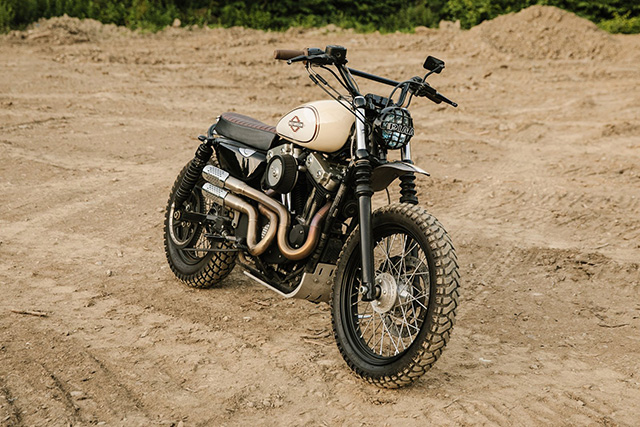 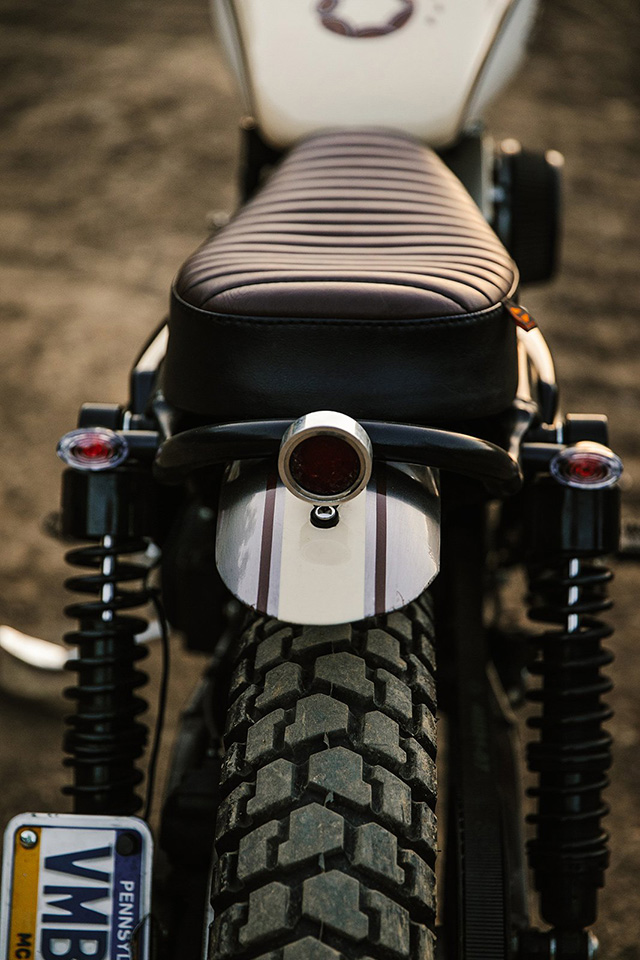 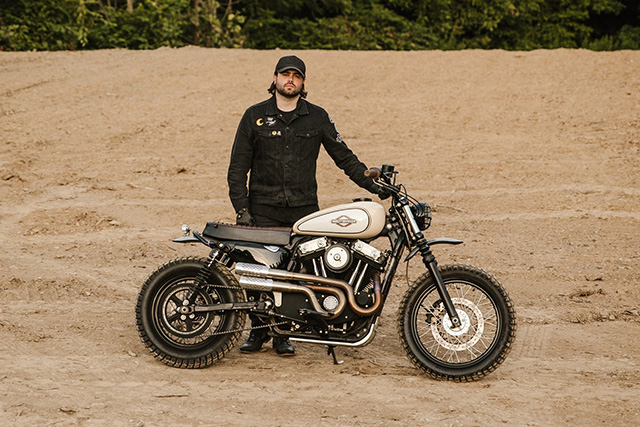