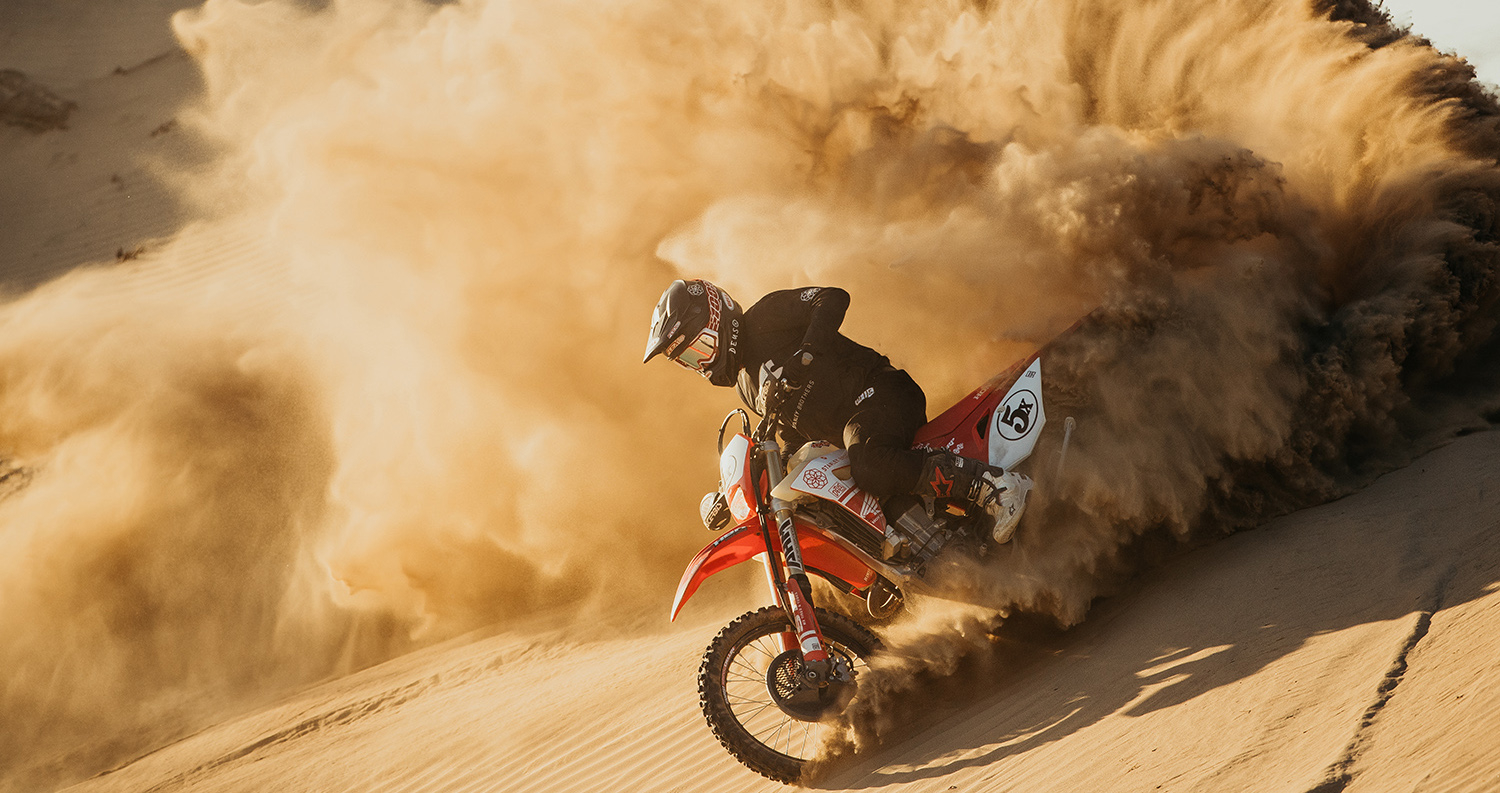 There is a nonsensical absurdity on our circling sphere in this vast solar system that where you find the most breathtaking scenery you also encounter cruel landscapes and abject poverty. So why would those with a choice, return repeatedly to a place that dishes out such punishment? Because, as it is for the locals, this is home and there is simply no other place like it! And despite the dust-filled heartache, the self-inflicted punishment, and sharing in your family’s pain, when ‘The Desert Said Dance’ the two-wheeled titans of the Baja 1000 return to tango.

This is the story of four men whose passion comes before any paycheck, as they take on the longest non-stop, point to point, off-road race in the world, The Baja 1000. All captured with stunning cinematography in a feature-length film by director Lincoln Caplice for Mojave Productions and Monster Children Films. Those four men are riders Forrest Minchinton, Derek Ausserbauer, Nic Garvin, and Colton Udall. And perhaps one single quote from Derek sums up the film, “You win all your life and still be a miserable person. You really can, you know, you, you enjoy, the stuff in between that really makes you smile”.

This is what ‘The Desert Said Dance’ captures so well, all the stuff that happens in between the racing action that we normally see play out in a linear fashion when we tune in on TV to watch a race. An event like the Baja 1000 is spectacular, from the racing action to the incredible scenery and the contest of man and machine pitted against an environment that seems determined to break both. But what really makes an event like this something special, something that moves you, is when you are emotionally invested in the outcome; win, lose, or worse!

And in the early parts of the film, you come to know the riders through their words, their childhoods, and in their pain. Like TT3D Closer to the Edge that so successfully (100% on Rotten Tomatoes) tells the story of the Isle of Man TT, this film gives an insight into its characters like Forrest and Colton in the same way TT3D made the world fall in love with Guy Martin. Forrest is a surfboard shaper by day, an adventurer at heart and yet when the lights go green his focus is steely determination. Colton Udall, he’s a born racer pure and simple, he’s won it all, he can build a bike from scratch, and he wears some of the most horrific injuries to tell his tale.

The Baja 1000 is not, especially for those on two-wheels, a way to become a millionaire. In fact, two of the four on the team have required GoFundMe pages in recent years to help them pay for surgery after catastrophic injuries. So, knowing this, having witnessed the pain of both broken bones and honest tears, when the race does arrive you wince at every narrow escape as the riders dodge the landscape, oncoming vehicles, and locals who never quite seem to get completely out of the way. In fact, some spectators sabotage the course or place booby-traps, and death lingers in the air.

So, having witnessed his pain and knowing the danger, to see Udall in full flight on the team’s Honda 450, reaching unbelievable speeds across the sands as he dances on the pegs with the throttle pinned wide-open as the camera chopper fails to keep up. These are moments of pure triumph that ultimately have nothing to do with the outcome of the race and everything to do with the success of truly living one’s life! “You have to take a deep breath and just realise that you’re living, you’re breathing, you’re in an opportunity to do things that people around the world don’t get to do,” Nic smiles.

The star however isn’t just the riders, the backdrop of the beautiful and yet unforgiving environment of the Baja peninsula is a character all of its own. The well-chosen soundtrack and extensive use of helicopter footage helping to capture the sheer expansive of this rugged location that racers traverse at incredible speed. “When I’m sitting on the start line at three in the morning, all I could think about was that the sun was gonna come up and I was going to see the ocean,” Forrest recalls, his inner surfer never far from focus.

All of which reminds you, often starkly, that as American as the Baja 1000 is, this is Mexico in all its vibrancy, contradictions, and smiles. Yet you never feel like the four racers are trespassing on foreign land, they love and respect this place and its people deeply. And that is all you need to be to enjoy this film, a lover of people.

Sure, the more into motorbikes you are the more you may appreciate certain details. But as a very technically proficient production, it’s also raw enough around the edges to truly feel what it’s like to live it, “The thrill of speed. The challenge of man and machine against the elements!” The Desert Said Dance and through gritted teeth they do, as will you too, watching the gripping action unfold on the big screen before you.

To see where the film is playing near you, check out: Desert Said Dance tour dates.