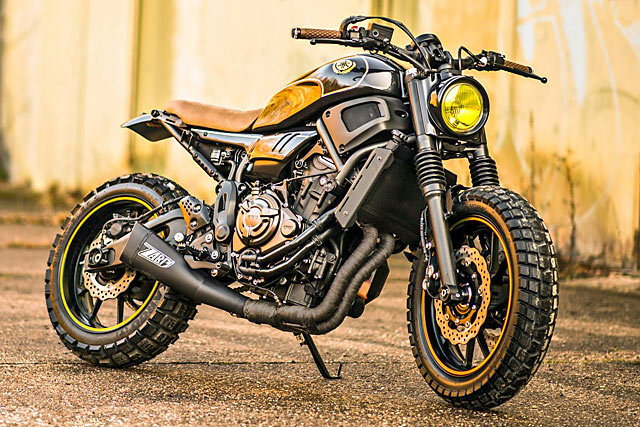 Being on the receiving end of many custom bike submissions, you tend to get a pretty good idea of just how prolific a bike shop really is. Some we hear from once a year. Some twice. And then there’s France’s Motomax Metz. Believe it or not, this here bike hit our inboxes little more than two weeks after their previous build. At this rate, we’ll be featuring another 26 of their bikes in 2017, and by 2020 France will be nothing but an army of cool Yamaha trackers and a load of fresh mud. But before that happens, please meet the rad-to-the-bone ‘Dirty Smoke’ XSR700 that will have caused it all. For their very latest build, Thomas (a.k.a ‘Quakers’), Christophe (a.k.a ‘Pépère’) and Michael (a.k.a. ‘Portuguese’), collectively known as the go-to custom builders at France’s Yamaha dealer Motomax Metz, brushed off the swarf and downed tools to give us the skinny on their latest build.

“It’s called Dirty Smoke,” says Thomas, “And it’s based on the same Yamaha XSR700 model we used for our last build. It’s clearly related to that bike, but this time we aimed for a much more aggressive, fighter-esque look. To this end, we have mounted two very large diameter motocross tires on the bike to ‘play the combine harvester’ when the bike hits the dirt.” Playing the combine harvester! I think I’ve just found my favourite new off-roading terminology for 2017. As with the previous bike, the Smoke’s body kit comes from Germany’s legendary JvB-moto. The Zard exhaust’s guard has been treated to a nice new matt black finish, giving it and the bike itself a decidedly Darth Vader vibe. And speaking of evil empires, the leather the boys used to cover the custom saddle with was sourced from an old leather Chesterfield armchair made during France’s Nazi occupation. Let’s hope it was beyond repair before the boys cut it up, then. With even more darkness in mind, the boys took to the tracker’s radiator and guards, treating them to their own fair share of matt blackness. The handlebars keep things looking clean by allowing the cables to be routed internally, and the Biltwell grips were chosen especially due to their specific shade of rubbery brown-ness proving to be a perfect match for the antique brown leather. The headlight’s lens was tinted yellow to add a little retro vibe to proceedings; the fact that the paint job was inspired by the colours of the John Player Special racers of the ‘70s and ‘80s didn’t hurt, either. “We also rebuilt the rear frame loop and dropped the bike’s front forks,” says Thomas. “It’s been lowered by around 5cm for a more aggressive look, and we also added some black fork gaiters to stop the chrome underneath from catching the eye too much.”

The final steps included the “le bands thermique noir” that were placed on the exhaust manifolds (no prizes for guessing what that means in English) and the installation of the Motogadget flashers. Yamaha frame plugs were added to some unsightly orifices, and the bike was complete after some tasty new motocross pegs were bolted in place.

Clearly the boys are pretty proud of the tracker they’ve managed to create in little more than a few short weeks So why not let them have the final word? “The Motomax Metz shop is a collection of real bike enthusiasts and lovers of great engineering. To say we go above and beyond when we create our bikes is an understatement. For us, it’s vitally important that customers leave our dealership with their hearts beating hard and a severe case of goose bumps.” Sounds like the sort of place any biker worth his salt would kill to work at. Now please excuse me while I just fill out this job application…