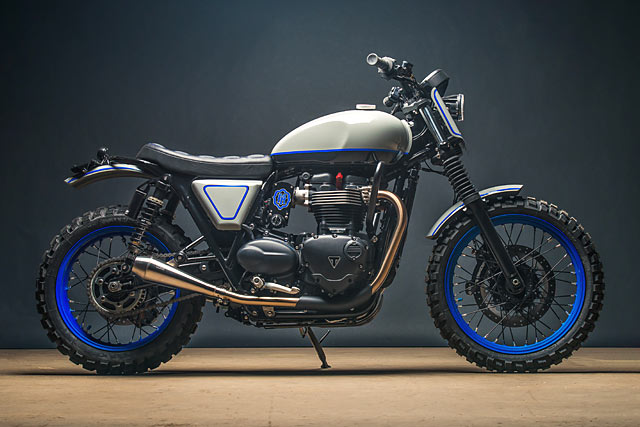 Ever since we first laid our sweaty little hands on Triumph’s new Bonneville range, we’ve been itching to see what customisers would do with them. And while there’s been a few shots fired already, we’re still holding our breath for something that really shows off the platform’s true custom capabilities. Imagine the collective sigh of relief when we sighted this, the latest bike from Chicago’s Analog Motorcycles. Built for the Rebel Yell Bourbon “Rebels Uncaged” competition, it also appeared at this year’s Handbuilt Show. And now it’s here. “We built a custom ‘05 Triumph Bonneville for Rebel Yell last year,” says Tony Prust, Analog’s owner. “So when we were asked to build a new custom for the 2017 promotion, we figured another Triumph would be a good base. We contacted them and they gave us a great deal on a new 2017 Triumph Street Twin 900. I purchased a 2016 Street Twin of my own when it was released last year and from experience I can say it is a great base for a custom. Triumph is also coming out with their version of a Street Scrambler this year, but I really wanted to build something even more capable of some real off-road riding.” Tony started by lifting the soon-to-be scrambler up about 2.5 inches and fitted custom-made rear shocks from Race Tech. Up front, he used a set of forks from a 2014 Triumph Scrambler, which are a little longer than the stock Street Twin forks. And the inclusion of the 2014 Scrambler front wheel and the 2017 T100 rear wheel gave them the spokes they wanted.

Next they mounted some new Michelin Anakee Wild tires for that aggressive on and off-road tread. With the stance sorted, they chopped off the rear portion of subframe and made a new frame loop. They also fabbed up a new seat pan while keeping the key removal function for quick access to the battery and USB port underneath. “Next we fabricated some custom aluminum side covers and made a billet air intake for the left side of the bike. We also made a new rear fender and headlight plate. We used some Denali Electronics LEDs for the running lights and the regulator rectifier was shifted up front.”

“With many of these modern machines, they are wired in a way so that if you remove key components, you also lose some functionality. So we needed to keep the factory speedo. We took it out of the stock housing and made a few new mounting components, giving it a more fluid look on the bike. With that and a modified Beringer rotor, we have retained ABS, traction control and all the other modern functionalities Triumph included, but with a custom look.”

Continuing with the tailored electronics theme, Tony then slimmed down the wiring harness and installed a set of Renard Speed Shop custom switches along with a MotoGadget m-Relay+ for an amazingly sleek ‘bar set up. Beringer Clutch and Brake master cylinders didn’t do it any harm, either. “After we had the stance and all the fabrication done, it was time to tear it down for paint and powder coating. This is when I decided to really let the rebel out and went with an electric blue color for the rims and accents. The blue, paired with a medium gray and black, give the bike a very clean and classy look. We had Brando stripe all the parts with a blue and black pin as well as a color matched spin on the Rebel Yell logo. The seat pan was upholstered by Charlie over at 83 seats in a grippier black leather material with blue stitching.” Then it was time for the final push. Tony wired in his Analog Motor Goods Retro Kit to the rear fender and Watsen signals up front. He designed a set of CNC pegs to keep the rider’s feet well planted and added some dress-up parts from Motone Customs. Also used were some of Triumph’s own line of parts, like the skid plate, crash bars and engine protectors just in case the bike’s new owner was to get a little too squirrely in the dirt. “To finish things up, we installed a Cone Shorty Performer exhaust kit and we loaded the  Power Commander V with a custom map. After a few tests, we’re pretty confident that this scrambler is going to be a lot of fun to ride on and off-road and we can’t wait to put it through its paces when we ride from Spokane to Sturgis this summer.”