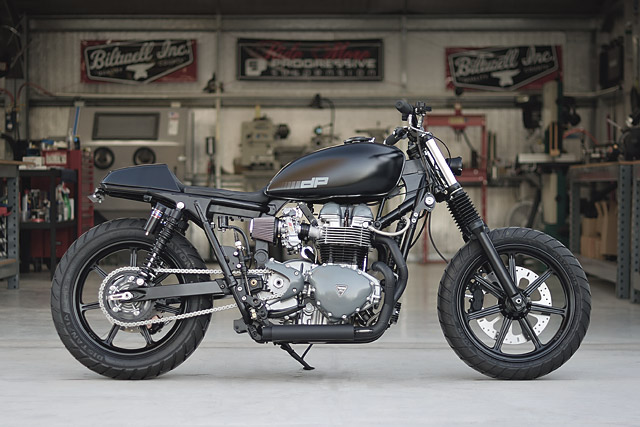 When you’re a workshop that specialises in Ironhead Harley-Davidson’s and a customer asks you to build them a custom 2001 Triumph Bonneville, there is only one way to prepare, boil the kettle and start watching Guy Ritchie films. And that is exactly what Brothers Jarrod and Justin Del Prado of DP Custom Cycles did when they were approached to build their first British bike. The customer request was clear; a simple and clean looking bike, dark in colour and fun to ride but the spanners they were swinging would have to change. Having exclusively built custom Harley’s the DP Brothers had one problem, virtually no metric tools with which to work. Their impressive collection of imperial hardware would get a well-earned rest as they set about transforming the Bonnie into the sleek custom that stands before you. With the engine removed from the bike, FCR 39mm Keihin carbs were fitted and a custom 2 into 1 exhaust and handmade muffler were designed and fabricated to get the Triumph drinking and breathing properly. The suspension is vastly improved with progressive springs at the front end and an impressive pair of Works shocks at the rear. Pulling the Bonnie to a halt is a Brembo caliper up the pointy end powered by an ISR master cylinder, while the rear now benefits from an EBC rotor and EBC high performance pads being final piece in the stopping puzzle. Adding to the tough look of the bike, something synonymous with DP Custom cycles, is a blacked out set of wheels and Avon Distanzia rubber. With parts from some of the best manufacturers in the world fitted the DP Brothers then showed off their fabrication skills with the beautifully crafted seat pan and sheet metal tail section that now hides a Ballistic battery. Never to do anything by half measures the boys then rewired the bike from scratch, a process very different to a Harley, while no stone was left unturned until it was perfect and the last of the electrical components were hidden under the seat in a custom enclosure. Brandon at Walkers Way did the paint work and according to Jarrod “He lays matte clear on like a surgeon.” Finishing off the Bonnie is set of Biltwell Inc. Tracker bars, aluminium throttle, and grips. With their first British bike build behind them DP Customs are now confident they’ve cracked the Triumph code learning all the little idiosyncrasy of the mark along the way. From the different wiring, to the clutch cover bearings that required a custom tool to remove and even the extra effort needed to do simple jobs like remove engine covers. “In the end, we learned we’ve got the minerals to do a Triumph!” enthused Jarrod Del Prado. So while DP Customs have named the bike “Rusi” it’s hard not to go back to the beginning of this bikes Guy Ritchie inspired build and find a character that best represents this Bonneville. A take no prisoners, tough looking Brit with American hardware and Bullet-Tooth Tony the London Bounty Hunter with his Desert Eagle .50 is exactly that. But as Tony would say, when you’re as tough as this Triumph, with the bite to match the bark, “You can call me Susan if it makes you happy.”