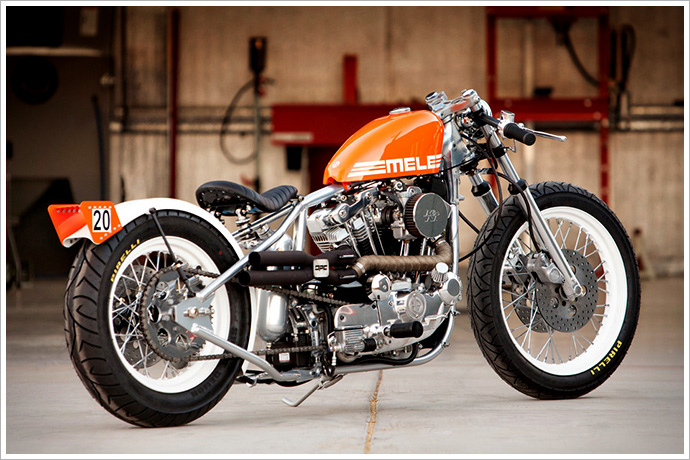 If you’ve ever studied art (yes, yes – but I’m all better now) you’ll know that history’s best artists often hit a sweet spot in their career where they just can’t seem to do any wrong. It’s like the planets have aligned for them and they have some sort of sixth sense about what makes a masterpiece and what doesn’t. Picasso had his blue period. Monet had his water lilies. Coop had that series of pictures with the hella sexy nudie devil girls. Oh, hang on; that’s all his work. Anyhoos, we’re beginning to think that Arizona’s DP customs has reached their own particular acme of perfection. It seems that every bike they have completed of late is somehow from a collection of work yet each one is a superb example of the custom bike art form. We are not worthy. From the DP Customs site: “A hybrid between a cafe’ racer and a drag bike, this ride has the spirit of racing running through its’ veins.  Powered by an all new, hopped-up 1000cc Ironhead. Featuring a custom DPC x-pipe exhaust system and more goodies than we  can mention. Everything that went into the design of this bike has a special meaning, we hope you like it!” Jarrod built this ironhead for racecar driver Perry Mele, a participant in the US Pro-Mazda series. The donor bike was a ’79 HD Sportster. It’s donk has be souped up with hot cams, headwork, Branch intake manifold, and a Mikuni carb. The seat, grips, and throttle are all from Biltwell and the oil tank was a scuba jobby. We hope the diver was finished with it before Jarrod grabbed it. Jarrod seems to be able to walk the fine line between theme bike and tack with an ease that most other shops would find hard to replicate. Need proof? Look no further than the bike’s unique rear spoiler; it’s something that could have easily tipped the bike’s look over the edge and into parody, but it’s size and placement have been handled with true aplomb. Back pats all ’round. Here’s Jarrod. “Our customer on this build is a racecar driver, so we really wanted a racing look and feel. It turned out to be a really cool hybrid of a cafe racer and a drag racer-style bike. The sport bike tires and clip-ons work surprisingly well with the 6” stretch. The owner says, “it’s the smoothest riding bike I’ve ever been on, and it begs to be ridden fast!” “As we were delivering the bike down to Tucson, we could see just about every motorist that we passed snapping their necks to get a look at the bright white wheels contrasting with the bright orange and the near chrome. The owner had not seen any photos, but we were pretty sure he’d like it based on the response we were getting.” “Special thanks to Duffee Motorsports, Ramjet Racing and Strahm Photography for helping us bring this whole project together.” (via the always fabbo Chop Cult)