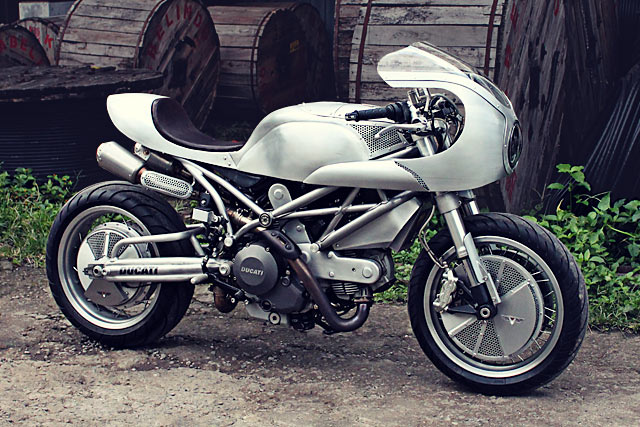 Indonesia has proved quite the powerhouse of late when it comes to custom bikes. With builders that are easily the best in the region and a beautifully original take on things, it’s a country that attracts the interest of the region’s bike fans over and above many of its contemporaries – Australia included. And the Indonesian crème de la crème would have to be Bandung’s White Collar Bikes. Their main man, Ram Ram Januar, has the metalworking skills of sword maker. And here’s very shiny, perfectly brushed proof. It’s his latest build, an all-metal Ducati 795 racer. Ram doesn’t mince words when it comes to his inspiration for the build. “It was built to sell,” he says. OK then. “I’ve always wanted to try to build a full fairing in metal, and when I crossed paths with this Monster for sale, I decided to go for it. But it was always meant as a bike that would be sold in order to fund other projects.” As with all of Ram’s work, he started with some sheets of aluminium and a whole bunch of skill and went from there. “All the metalwork is hand formed,” he notes. “It’s shaped with wooden hammer at first, and then an English wheel for the final shape. Then it’s finished with sandpaper, again all by hand. It’s very long and painful process from start to finish, but hopefully the results are worth all the effort.” “Once the metalwork was done, I decided that I wanted the frame to match the metalwork, so I stripped all the iconic Ducati red paint from it until there was only bare metal left. Then we covered it with a clear coat to prevent rust,” say Ram. As you’ve probably already clocked, the swingarm is also handmade. Ram started with three different sized aluminium pipes and welded them together length-ways. Then a new rear hub was CNC’d from billet aluminium and fitted with hidden disc brakes inside. “To match the rear hub, I decided to make a rotor cover for the front wheel too.”

“As always, some people said that it wasn’t a good idea. ‘Why don’t you just get a classic bike instead of making a new bike look like a classic,’ they complained. I said, ‘Why not? It’s my bike, not yours. If you’re sure about it, why not build your own bike.” We’re guessing Ram doesn’t take kindly to ill-informed feedback on his work. The fuel tank, also made from aluminium, proved a little challenging. The tight spaces the factory allocated to the frame’s original design meant that the fuel pump is located very close to the exhaust. Not a problem with the stock bike, but clearly it’s something you are going to pay very close attention to if you’re creating your own tank. “To prevent the engine heat spreading into the body, I put some heat protectors underneath and made several vents in the bodywork, including the two you see directly beneath the handlebars, that deliver air underneath the tank, helping to keep it cooler,” Ram explains. Ram says that the toughest part of the build was the welding work on the fairing. “Because it’s my first prototype for this type of aluminium fairing, I made a few mistakes and changed my mind a lot during the construction.” With a truckload of perseverance, Ram managed to get it across the line. And then, in a real sign of his determination, he made another one for his own bike just to prove a point. Overall Ram says that, although it was a money-maker, he grew to really like the bike. “It runs great and is very smooth, but it’s probably a bit too hot for the Indonesian weather. As any local will tell you, it gets blisteringly hot here, and when you are stuck in Jakarta traffic the heat from the engine is super annoying. But once you get it on the open road, well…” Well indeed.