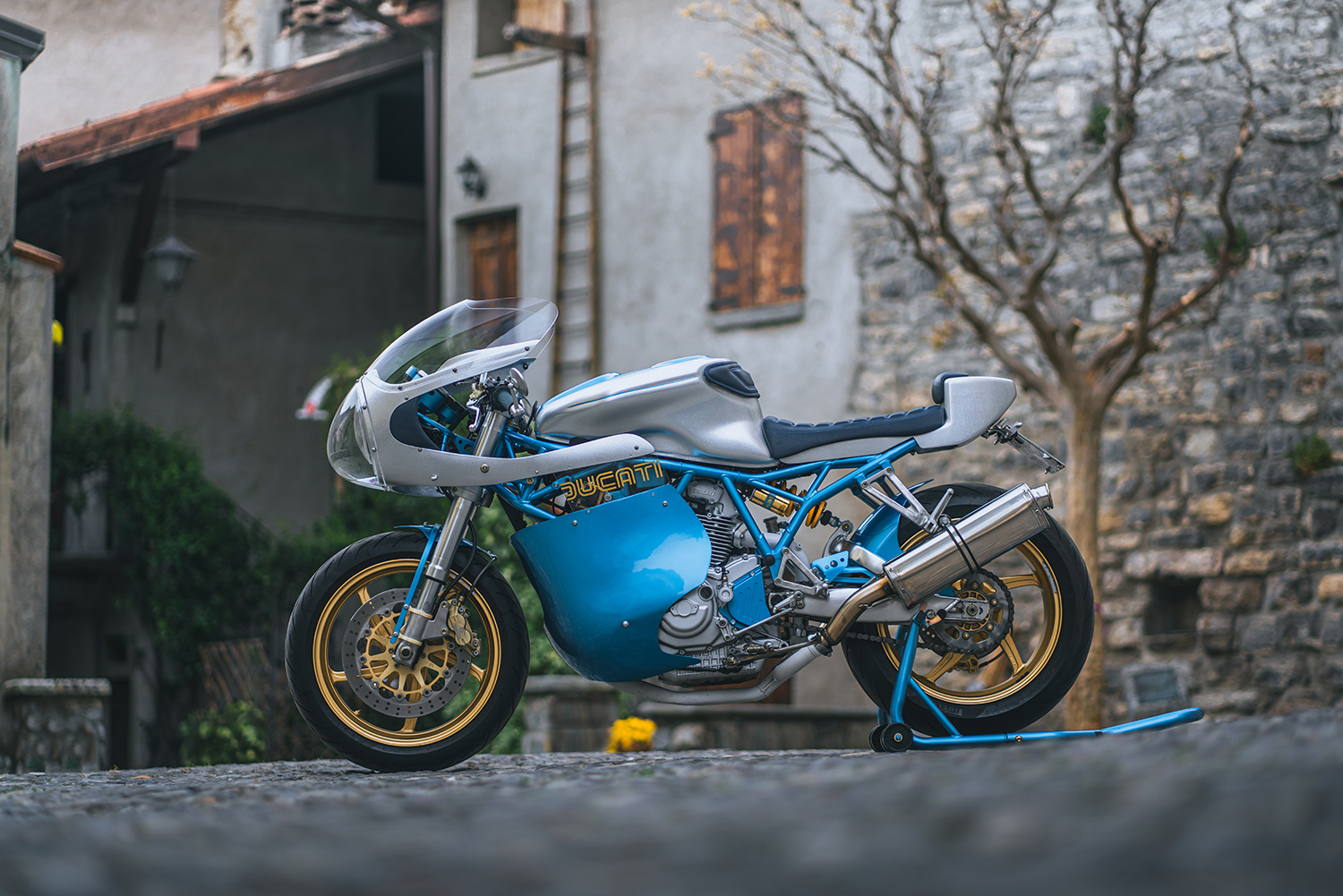 Modern renaissance man Giacomo Galbiati never surprises us when he sends us new images of his latest stunning motorcycle; creating beautiful bikes is just what he does. But what knocked us over this time around is that the proud Italian from Como has for the first time turned his attention to a Ducati, in fact, it’s his first bike from his home country full stop. That just meant the first Bologna beauty to roll out of his GDesign Custom Motorcycle workshop had to be extra special and Giacomo doesn’t disappoint with this gorgeous 2002 Ducati 900SS that he appropriately calls, ‘Il Duca’.

2020 was a big year for Giacomo, riding the emotional roller coaster of Covid-19, living in one of the hardest hit regions in the world. But he found a sanctuary amongst his machines and ended the year off with a top ten finish in our own bikes of the year awards. The Royal Enfield he’d built had a distinctly Indian touch, having also crafted bikes from Germany, Japan and the United States. So turning attention to his home soil, the selection was right on point with the 900SS a classic mix of old and new.

“Bikes that are already beautiful on their own and accepting a similar challenge is bread for my teeth. I chose a classic, 2002 900 supersport still two valves with a lot of charm in the hearts of Ducati fans. As always, I wanted to give a modern luster by researching history and study committed to design and a lot of attention to detail,” the man himself explains. To tease his fans, Giacomo dropped an image of the bare frame on his Instagram when the build commenced, but to the untrained eye they were still left guessing as the trellis item could have been from a host of bikes.

With that frame on his bench, he ground down many of the unneeded tabs and then tackled the all-important subframe. Being a non-removable piece, that first cut is a hold your breath moment and he’s removed just enough to work with his design, without making the fatal mistake many make of hacking too much off. With no intention of keeping the huge factory seat, the tail section was the first area of bodywork to be replaced and a hand fabricated piece combines lines old and new, for a slender waist that meets the stock tank’s large hips.

To balance out those proportions a full cafe fairing was chosen that has been heavily modified to receive a clear screen and matching front bubble. In behind goes a modern piece in the form of an LED headlight, and the bar cutouts have been trimmed for an added touch. Below a lower fairing that incorporates a forward belly pan has been shaped and then the two pieces connected with clear perspex that have the traditional Ducati logo applied in gold. This sets the theme for the rest of the paintwork, stunning metallic Mediterranean blue and heavily flaked silver.

The blue is extended across the entire frame and even finds its way into the black leather work on the tank and the seat as the colour of the stitching. A tiny front blade style fender with custom mounts and rear hugger also get the blue treatment and the heavy splash of colour lands on the clutch cover too. Giacomo then pulled the factory gauges apart and built-up all new surrounds, that are a mix of brushed alloy and leather for a true vintage feel with all the function of the stock cluster.

With 20 years of work under the engine’s belt it was decided to pull it down and give it a refresh and from the inside out, it looks better than factory. The belt covers are clear, and the dry clutch sports a half cover, so the mechanicals are on full display. While the stock headers have been ceramic coated white and the exhaust system finished out with a set of twin stainless steel mufflers with a timeless appearance. Even the fluid reservoirs have been swapped out for silver items so that function matches form.

The adjustable suspension front and rear have all been brought back to as new condition, so to the Brembo brakes. Then it was time for some heavy elbow grease as the swingarm was metal polished to a brilliant shine. The wheels are painted in a timeless gold, that matches the calipers and Ducati logos and you can see that our Italian master ensures that every aspect of the bike becomes one. To finish out the build, tiny LED indicators ensure the lines are left undisturbed and a set of mirrors are fitted up to the clip-on bars. It might be his first Ducati, but it’s clear the Italian tradition flows heavily through his veins, as Giacomo Galbiati transforms The Duke into one hell of a regal ride.