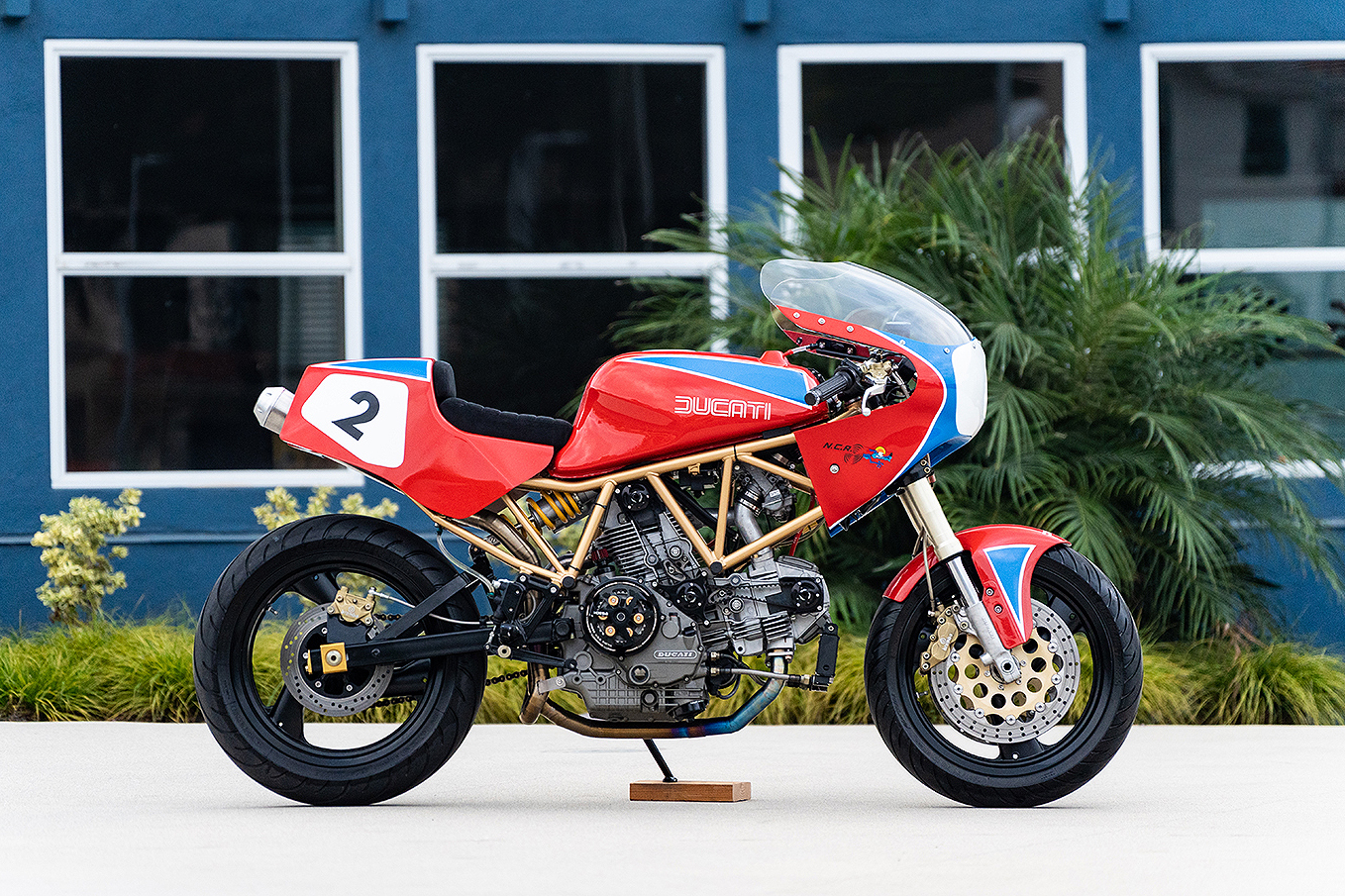 Through turmoil and at one point endless ownership changes, Ducati has always known how to ensure there is a bike in their lineup that’s just right for every Ducatisti. With the launch of the liquid-cooled and complex 851 superbikes, the Bologna factory needed a sports bike that was cheaper to maintain and more orientated towards road riding rather than racing. Enter the 900SS, and offered in both full and half-fairing packages, the company knew she was a looker, both in and out of clothes. Inspired by some of the world’s best builders, Nick of CodexMoto ran with the half-faired look and then has taken it to all-new heights. Finished and ready for the streets of San Diego, the shed-based builder can now show off his scintillating SS.

Having grown up riding motorbikes and pulling apart everything he could get his hands on, Nick had always had a love for two wheels and the chance to get his hands dirty. But moving to New York to pursue a career on Wall Street didn’t leave much time or space for the hobby. “I relocated to San Diego and one of the first things I did is buy a Honda CX500 for $300 from an auction near the Mexican border. After giving that the scrambler treatment, I caught the bike-building bug.” Now hooked he was on the hunt for a new project and the famous L-Twin engine was calling his name.

“After sorting out a donor bike I looked for inspiration and found it in Walt Siegl and XTR Pepo bikes to name a few. But a Pipeburn piece that featured a 900SS by Speedy Siegel was the main influence. He used Yamaha TZ250 bodywork on the 900SS and I thought it was a great looking mashup.” Knowing he was going for an under-seat exhaust, Nick began shaping a TZ tail section to suit and having created the mould sent it out to Catskill Mountain Customs to brilliantly recreate it out of aluminium. The subframe was then altered to fit the lines of the tail.

“I thought fibreglass in the front and aluminium in the tail would be too discordant so Catskill pounded the fairing out of aluminium too. Those pieces are also pieces of art,” a very pleased Nick tells us. And he’s not wrong, the look is simply stunning and works brilliantly with the Ducati’s trellis frame. That chassis has been powder coated in gold, before the colour scheme was laid down, which is heavily inspired by the TT1 race bike from the ’80s. The endurance racer look is finished out with a nicely padded seat that has been perfectly upholstered.

On paper, the 900SS engine doesn’t scream performance, but it’s surprisingly good on the street, with the configuration, capacity and two-valve design delivering plenty of torque low down for quick getaways. What it does need is more horsepower, and to get extra air and fuel into the pots is a pair of Keihin FCR41 flatslide carbs. The working parts are exposed with an open clutch and belt covers in black, but the real hit is that exhaust. “I thought an under-tail exhaust would look great with that TZ250 tail so I had StradaFab make a custom titanium 2-into-1 exhaust.  They did an amazing job – that exhaust is a piece of art,” Nick smiles again.

The devil really is in the details and with such an iconic Ducati powerplant onboard, too often they’re left dirty and greasy. Nick wasn’t having it that way, and with the engine on a bench stand, he spent a good time giving it the love it deserves. From the ultra-clean cases to the painted inspection covers, the sweet looking pod filters you’ll never see and the chromed clamps; it allows you to appreciate the totality of the machine without a single nasty surprise. Even the oil filler is now black to match the aftermarket covers and refinished oil-cooler.

Nick wanted to ensure the wiring was just as good, so “the original electronics were replaced with modern units.” All of which starts with the brains of the loom being based around a Motogadget m.unit. This sends signals to a host of Motogadget indicators that really keep the bike clean and a slick-looking LED headlight from JW Speaker. A beautiful Chronoclassic analogue speedo sits proudly above the triple clamps and the guys at Revival sent out their ultra-clean switch gear to match the Motogadget grips.

The whole bike is flawless from top to bottom and is a credit to Nick being just his second build. But ready to go again, the Ducati is now up for sale, so keep an eye on his social media for details should you too desire the ultimate SS experience.