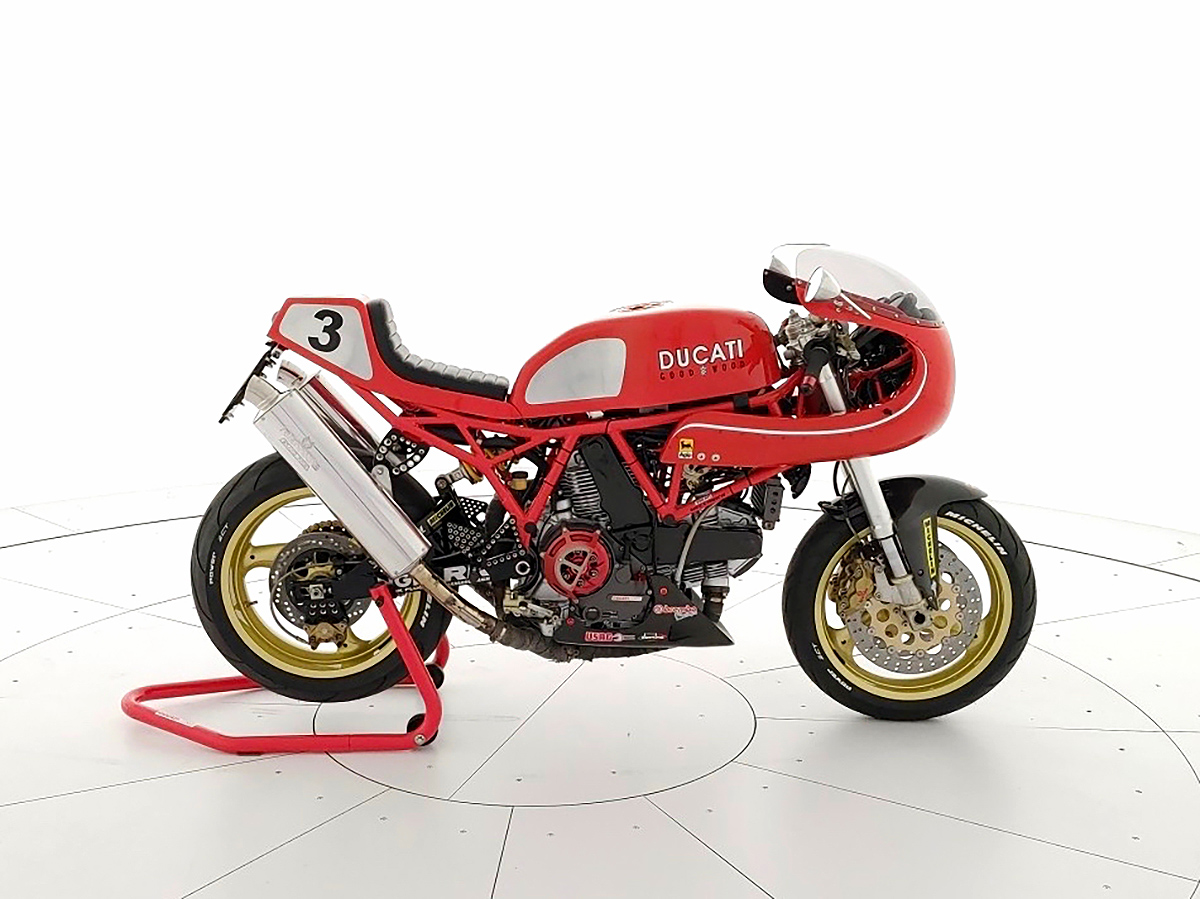 It might not have the prestige of its four wheel counterparts, but endurance motorcycle racing at events like Le Mans, remains one motorsports toughest tests of man and machine. The heavily Francophone sport of 24hr racing has largely been dominated by the Japanese manufacturers, with Ducati claiming a sole win at the Barcelona even in 1973. That era however was the iconic period and to inspire his countrymen, Nicola Borgogna, has built an homage to those glory days and it’s dedicated to the place that now brings them all together, Goodwood. From a 2001 Ducati 900SS, he and his team at Autorestauri Borgogna Alessandro in Northern Italy have crafted this stunning piece of paisan pride.

Nicola and his crew operate out of the city of Brescia, the home of the prestigious Mille Miglia that used to start and end in the city. Here they not only build motorcycles but do incredible body work when restoring classic and vintage vehicles. So a bike focussed on the Le Mans period of the late ’70s was right up their alley. It was a period when body work really meant something, was a genuine performance enhancer and an area we are only now seeing focussed on again with the inclusion of wings, Ducati’s rear aero device and other enhancements.

Starting with a 2001 900SS gave them a bike with enough vintage looks to fit the bill, while still having all the benefits of a relatively modern machine; and the donor had exceptionally low mileage. With it all stripped down and a design drawn up, Nicola first focussed on trimming back the rear section of the frame to fit the seat unit he had envisaged. The one piece trellis frame, with its downward curve can pose problems for many, but the team decided to embrace its unique style.

The tail unit is made from aluminium, hand shaped, it flows rearward in a very period racing style with just enough room for the rider and then tapering to allow airflow to pass without hinderance. The front fairing is exactly as you would expect, and straight from the Ducati playbook. But to get the smooth look they were after, a mix of shaped aluminium and fibreglass was used to create the most perfect example they could muster. That is finished off with exquiste hand made mirrors, complete with dimple holes in the mounts.

Time to tackle the fuel tank and a host of obstacles would stand in the teams way as they sort to bring their design to life. The first, is again, dealing with the trellis frame and the second was finding enough room to fit the EFI fuel pump inside to keep the engine full of go gas. Shaping aluminium expertly once again, they formed the most beautiful of curves that flow into the knee dents. Completely different to the racing like flat top that dominated the period, yet working perfectly together; a race filler finishes it off.

Adding a modern touch, the belly pan is a carbon fibre piece, a popular upgrade on all unfaired Ducati’s over the last ten years. With a carbon fibre front fender and a rear hugger fitted; screwed into place after these photos were taken. The lightweight material then extends to the engine that is fitted with carbon belt covers. Then the body shop boys could do that they do best, smooth out all of their work and prepare it perfectly for the Ducati red that covers the frame, tins and front fender stay. With aluminium accents allowed to stand out and a leather seat to complete the look.

With the engine out for the paint process, they took the time to go over it with a fine tooth comb and gave it a new lick of paint for good measure. Piecing it all back together a new dry clutch was installed with a half cover and a high flow air filter slotted in for good measure. Then it was out with the TIG welder to craft the full exhaust system from 0.8mm steel, for an ultra light effect that also carries the heat and keeps the gas speed moving at an exceptional speed. The system is finished out with twin Remus Grand Prix mufflers in stainless and the ECU replaced for a remapped unit.

Having focused so heavily on saving weight, the exhaust hangers, pedal mounts, disc hanger and heel guards are all handmade, finished in black and then given a seeing to with the drill and countersink bit to add a bunch of speed holes. Lighting is kept simple with an LED unit in the front and a simple round light in the rear, complemented by tiny indicators and a custom alloy bracket for the numberplate. The clip-ons get Domino grips and a quick action throttle finishes out the build. With the graphics laid down and the Goodwood decals on the tank, Nicola’s brilliant creation wouldn’t look for a second out of place tackling the hill climb at the iconic Festival of Speed.