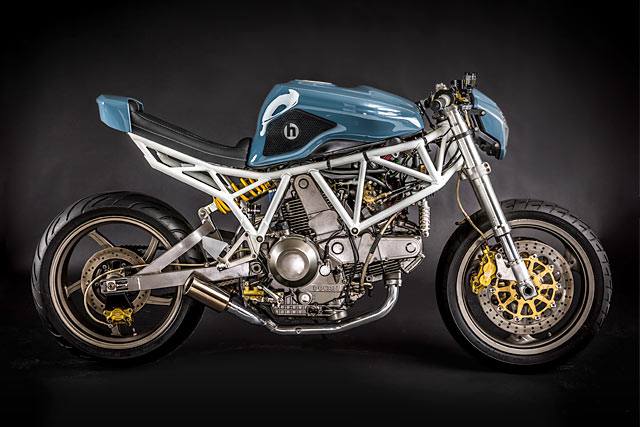 Overthinking things can be a death wish for any custom project. You spend all your energy on the creative part of the build and by the time you have to roll your sleeves up and get your hands dirty, you’re kind of over it. Here’s a hot tip for you: it doesn’t matter how long you spend in Photoshop, it won’t get the bike built. So when Scott Halbleib from Kentucky’s H Garage casually decided to maybe spend “a few days here and there“ on a lonesome Ducati 900SS taking up space in his shop, is it any wonder it turned out this good? Tim, a bike ‘flipper’ and regular H Garage customer, had brought a beat-up old ‘01 900SS into the Kentucky shop over the winter. Initially, his plan was to get it cleaned up and sell it for a quick profit. But Scott had other ideas. “It sat there for weeks tempting me; I have a real soft spot for Ducatis. Then we were all hanging out one night. I said, ‘Tim, what would you think about selling me that bike?’ “ Of course, he agreed and Scott spent the next few months trying to focus on the paying client’s work while spending his rare spare moments on the Duc racer. Its poor state of repair was pretty apparent, so Scott had sister shop Retrowrench go through the Ducati’s internals to get it running well before he let loose. “The previous owner had welded some large mufflers on it, which had rubbed through the swingarm.” Unexpected cost number 1. “Then I spent some time trying to reroute the wiring and retain the stock airbox, but it just wasn’t going to happen. So I sourced some pod filters and cut out all of the air box leaving the battery tray which holds the electronics.” Revenge was taken on the aftermarket exhaust with a sawzall and while he was at it, Scott also shortened the rear frame.” “I didn’t want to get too carried away with the build, as this was on my own dime and the bike building business isn’t all that lucrative,” notes Scott. So it was decided that the tank would remain in place. Besides, he already knew what type of headlight would work perfectly for the racer. “While some people remember friend’s birthdays or when their bills are due, I remember bike parts or designs – or random items that might inspire a design element.” Initially he was planning quite a radical tail section but as is typically the case, the tank dictates what works and what doesn’t, as it should. So it was modeled after the raised portion on the stock Ducati tank, which also matches with the raised area on the headlight. “With all this restraint, I wanted to try something unique for the seat. I decided that there would be a hole completely through the pan to display the Ohlins monoshock beneath. The mesh used also appears in the vents on the racer’s tail and in the mesh panel which holds the tail light.”

[superquote]“Initially he was planning quite a radical tail section but as is typically the case, the tank dictates what works and what doesn’t.”[/superquote]

Then Scott contacted a waterjet company to see about making up some custom knee pads. He scanned the same mesh he had used elsewhere, made a template for the overall shape, sourced some adhesive-backed rubber and hey presto, happy knees. “I’d seen a Toyota Scion with a blue-green-gray color and thought that it would look great matched with a white frame. Josh at Lafountain took out a little of the green and laid down some really nice paint. I knew I wanted to paint the motor with a high temp graphite colour to match the wheels, then I just had to figure out all the colours on the smaller parts. Meanwhile, Mike Brewer nailed the seat upholstery. He even sourced some perforated vinyl with blue edges to tie it all together.”

Some goodies, in the form of new adjustable levers, Rizoma reservoirs and a hidden on/off switch were added to clean things up. Then the call went out to Winston, former neighbor and Ducati technician for some finishing touches. In the end, it all came together beautifully. “It’s fast. It’s loud. And it’s going to be mine for a little bit before it goes up for sale. I haven’t had a chance to put some miles on any of my builds lately.” Somehow, we think that’s about to change.