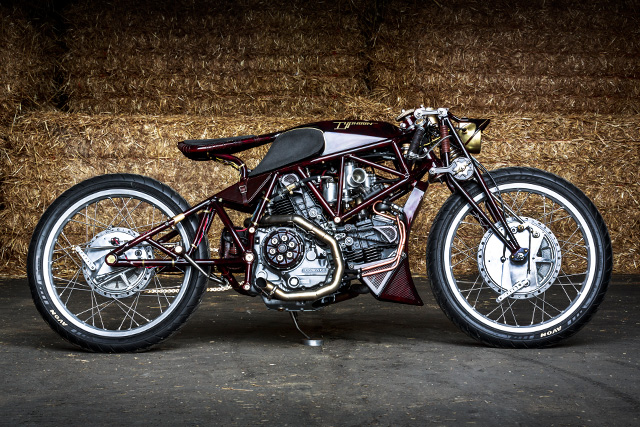 ‘英’ is the Japanese Kanji character for ‘great.’ It also happens to be the character that the Japanese use for ‘England’. See, when Japan first properly met the British, the poms were in the midst of creating the modern world with their fancy Industrial Revolution. And for a country that had closed itself off to the outside world for over two centuries, Japan-san was clearly impressed. To Japanese eyes, British steam trains were technology from 200 years in the future; similar to you or I seeing a motorcycle from 2214. So what better name than ‘Great’ for a country that could do that? Kind of how we feel when we see the latest creation from dear ol’ Blighty. Introducing Old Empire Motorcycles’s latest revolution, ‘Typhoon’. Here’s OEM’s Alec Sharp. “Old Empire Motorcycles is myself and Rafe Pugh. I deal specifically with the design and creation of our Imperial (or ‘without compromise’) builds, as it’s an opportunity to make exactly what I feel I need to without any cut corners. The creation of our other concept builds and our branding all come from both of us, plus a few other very dedicated British designers; craftspeople who we have the pleasure of working with.” Rafe’s talents lie in being able to create a story around a build and then realise the imagery and clothing to match, not to mention being the main man behind all of the leatherwork and saddles. “It’s been a bloody good combination for us so far,” notes Alec. The bike was built over a period of 18 months or so. Alec just added or made bits as and when he felt the need to, trying not to force the design or mindlessly stick to a self-imposed deadline. “I have found that for me, this is the best way of going about building and designing something that is a little special.” “One thing to note, and I know it will come up with your readers, is that it has been ridden extensively and although it’s not exactly a European tourer, everything comes to hand beautifully and everything holds you snugly in place. It’s one of those machines that you only really feel comfortable on at speed, tucked in, feet up on the go-faster pegs and laid down over the tank. On that subject, it’s still insanely fast, loud and handles surprising well considering the addition of the girder front forks.” “I want these builds to go back to why I enjoy building custom motorcycles. We have been going for 3 years now and we have built numerous bikes; some we released and other we haven’t. Still, the most enjoyable motorcycle I have built to date was the Pup; the idea of building short series of them didn’t pan out, but the process of being able to take my time and piece together the build bit by bit was by far the most enjoyable aspect of the build.” And in case you’re wondering, yes, it’s already sold. The fact that Alec was not constrained by time meant that he could really sit and think about the whole process. “I guess you could say we ended up with some kind of modern day board tracker, but ultimately I just wanted to build whatever most suited the lines of the original motorcycle. As with everything, there are little bits I would have done different in hindsight, but overall the result is something that I’m really pleased with.” It has given Alec plenty of pointers as to how he wants to refine and push a few more ideas he’s touched on here with the next Imperial Build. “We’re calling it the Comet,” he says, proudly. “As with all of our other builds, we have drawn inspiration from specific styles, but the with the Typhoon we have built what we felt we wanted or needed to build based around the specific donor – in this case a ‘95 Ducati 900ss. It is what we feel is the perfect showcase of the very best aesthetics from the original motorcycle mixed with carefully engineered handmade components to produce a vehicle that goes back the fundamentals of two-wheeled travel.” Naturally, the boys started with a ‘95 Ducati 900ss. From there, they added some custom girder forks, and a custom speedo and tacho set-up. Then came the custom brass headlight, the 21’’ front wheel quad leading shoe drum brake and single leading shoe drum. Next came custom bars, a bevel gear throttle, twin Amal GP3 carbs and a custom stainless exhaust system. The home stretch saw them fab up a set of handmade rear sets, some leather grips, a custom twin tanks with knee pads, fuel lines, a braided wiring loom, a pull-type starter and a handmade headlight shroud. And as an extra special treat, here’s the teaser video the boys put together to launch their creation. Chalk up another one for Old Empire, and one more for the British empire, too. Enjoy.