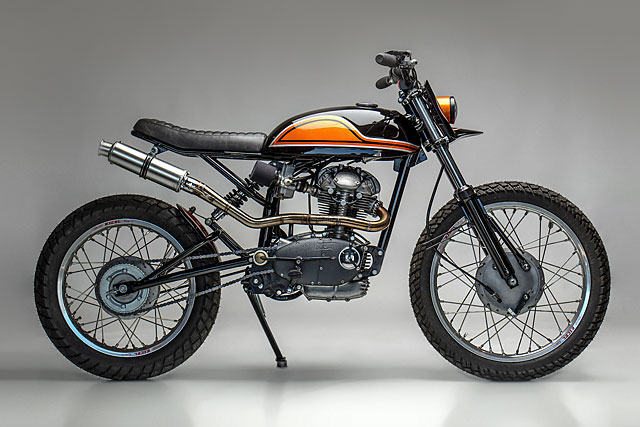 MotoRelic is a little shop run out of Hamilton, Virginia by the very talented Sean Skinner. And despite having over 20 years of experience as a mechanic under his belt he was nearly beaten by this – a cursed 1965 Ducati 250 Scrambler that he dubbed the ‘Dastardly Ducati’. This little Duke ended up being one of those builds that fought him at every turn. For those of you Ducati obsessives worrying that Sean has chopped up a stock 250 Desmo, put your pitchforks away. ‘The bike came to me in a bit of a chopper-ish form,’ he says. ‘The frame was butchered and hard-tailed with a rod welded to the swingarm’. So he cracked out the grinder and cut everything away, leaving only the swingarm and the frame around the engine. Then it was on to the wheels. Sean opted to keep the front and rear hubs, fitted with new stainless spokes matched to Excel rims. The forks and triple clamps were taken from a TS250 and machined down to fit, while at the rear MotoRelic opted to go with a monoshock swingarm. ‘I had no idea what I was doing,’ Sean admits, ‘but I did know that the swingarm was way too short to accommodate a single shock.’ So Sean cut and stretched the swingarm, fitted a modified Icon shock and he was done.

Thankfully the tank and seat combination was easier. A T350 tank was spied in the workshop, eyeballed as a good fit and some mounts were adapted – and that was it. The easiest part of the build was completed. Behind that the simple seat was covered by Counter Balance Cycles in a distressed finish known as ‘Smokey Burnout’. Next in his sights was the headlight. ‘I don’t know why I put myself through that torture,’ Sean says. ‘It doesn’t look like much but when you take a light that was meant to be only mounted one way and you try and mount it another way things get difficult. There are many hours in that damn thing but when it was mounted on the bike it was clear that it was worth it.’ When completed, all the metalwork was sent to Homeward Bound Motorcycles for a tasty paint scheme. With all the components spread around the workshop Sean turned to the engine. It wasn’t in good condition – it had some major leaks and a myriad of issues so it needed to be torn down to the bare cases. Every component was stripped out and the full extent of the neglect revealed itself. ‘Every roller bearing was rusted and all the races were pitted,’ Sean says, ‘The cylinder was scratched and the piston was damaged. Not to mention everything was rusty.’

New components were sourced from Lacey Ducati – including a used bearing race that is no longer available. So the bike received all new bearings, seals, gaskets, clutch, had it’s cylinder bored, new valves and tidied up seats, all stainless hardware and a waltz through a vapor honing cabinet. Despite the poor condition of the engine, Sean Skinner was taken by the old engine. ‘Ducati’s level of design, even back in the 60’s is a work of art. There’s something about this engine that has been lost in modern engine design’.

[superquote]“He kicked again and it started, but it backfired so loudly it sounded like a still night in Chicago”.[/superquote] Then the time came to fire the scrambler up. ‘In the moment of truth,’ Sean says, ‘I’m thinking – did I follow the poorly translated manual correctly? Is the timing right? Were the shims and bevel drives set up correctly?’ There was only one way to find out. Sean kicked over the engine… and then it died. He kicked again and it started, but it backfired so loudly it sounded like a still night in Chicago. It turned out the new points condenser was useless and the burnt out. A handful of jets were sent out by Desmo Pro and the bike was sorted in no time. And now he’s smitten with the Dastardly. ‘That Dellorto carb, the strange timing procedure, the very loud valve operation all seem to add to the character of this motorcycle and I would welcome the chance to do another one!’ Sadly, this is off to a happy customer but I think this won’t be the last old Duke we see MotoRelic tackle.