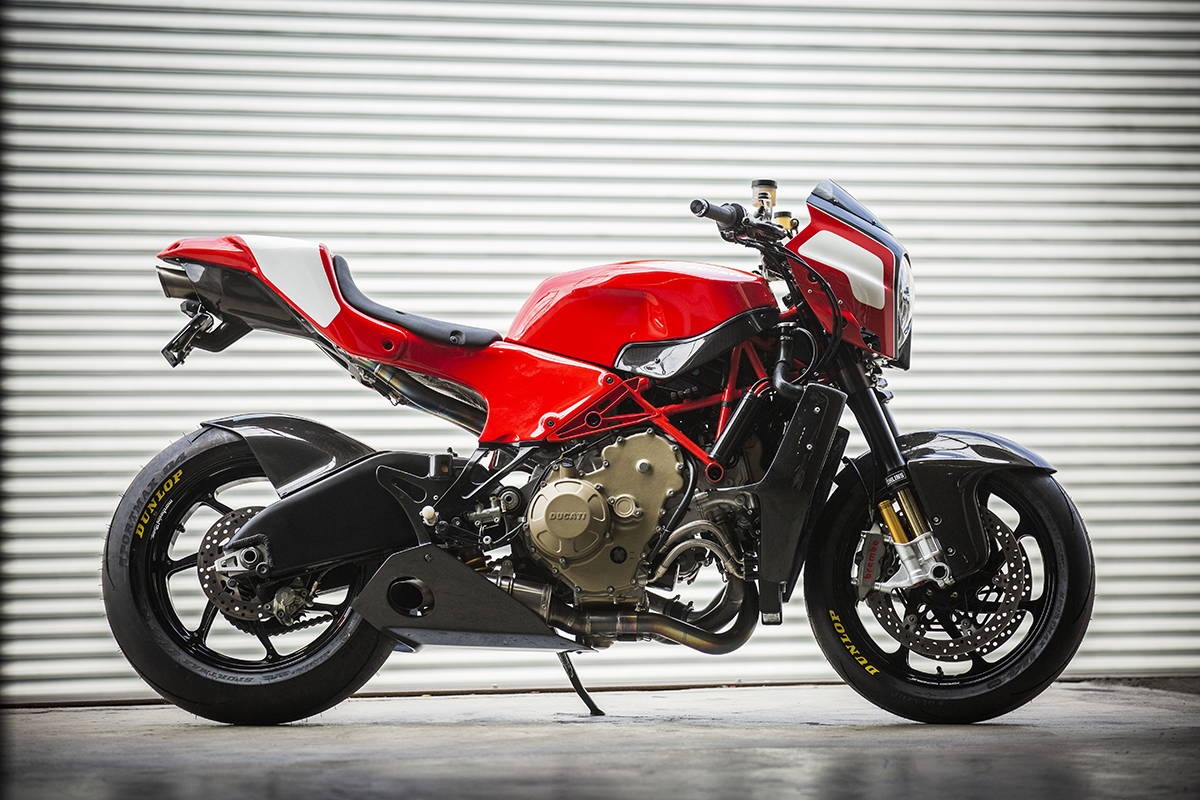 The qualities of what we are most passionate about are often, in fact, subjective, based on emotional and irrational attachment and throw in a little nostalgia and people go a little mad. But take off the rose-colored glasses and at the time of its production, no other machine to ever wear a license plate had been as special in every single way as the Ducati Desmosedici RR. Based on team Ducati’s GP6 MotoGP bike, it had jaded motorcycling journalists giddy with joy, and custom bike building superstar Roland Sands called it the Mona Lisa. So, you have to admire the man behind RSD, as having once dodged the bullets of the Ducatisti, he’s gone and cut up a Desmo once again, this time producing the ultimate Streetfighter for a surgeon who likes his machines to have scalpel like abilities.

The Desmosedici RR (Racing Replica) was first announced by the Bologna factory in 2004, with a promise to build a road legal version of their MotoGP bike. By 2006 at the Mugello circuit, the press were treated to the first look at a road-ready version, and the order books were thrown open. All 1500 examples sold immediately, Ducati could have demanded tens of thousands of dollars more and still sold the lot, but this was a loss leader of the best possible kind. The first owners took delivery at the beginning of 2008 and the motorcycle magazine industry that was still flourishing at the time plastered them all over their covers and wrote hundreds of articles with glowing praise.

Just a few years later and Roland Sands had torn one down and built a flat tracker of incredible quality, a simply astonishing custom build, but plenty of purists weren’t happy. “This Desmo project is a special one, as all Ducati builds are, but it’s also one that brings some anxiety along with it, as carving up a second Ducati Desmosedici D16RR may push the Ducatisti purists over the edge.” But as controversial as it is, Roland need not worry, he treats such bikes with the full respect they deserve and only sets out to customise such a special machine if what he can deliver is an incredible addition to the storied history of the RR.

This bike is number 245/1500 and had less than 5000miles on the clock when it rolled into RSD HQ with its owner. “Being a surgeon, he’s a handy and intelligent guy and when his age started creeping up past his skeletal ability to ride a superbike, rather than sell the Desmo, he chose to do exactly as he wanted and build a Desmo Streetfighter with some more comfortable ergonomics. That’s where we come in,” Roland smiles. The Desmo RR is a hard bike to ride, it’s cramped and not for the faint-hearted, so Roland’s aim was to build the bike as if Ducati had done a naked version. And to do that he stripped it down and scanned the bike into Gravity Sketch, a virtual reality 3D design program.

“The real magic was in converting that data to usable information we could 3D print and then utilise to create the molds for the finalised carbon body.” The parts that Roland needed to design were a new upper fairing and lower scoop, right and left tank inserts, right and left radiator shrouds, venting, and a lower fairing. This is where his skills shine bright, few others can sit at a tablet and draw up something so beautiful, so functional, and yet retain that distinctive RR style. “We worked with our friends at Saddlemen to repop the final body panels and they were able to bring the design to life in a carbon fibre weave that matched the original Desmo.”

A little massaging was required to get the new panels to fit to absolute perfection, but the result is flawless, and of high end production like quality. The next step was to paint them up, and it took an enormous amount of skill for Chris Wood at Airtrix to match the original Desmo Red used on the factory machine; it’s not a colour you can simply pop down to your local parts store and pick up. The new look front end meant that there was no way to work in the factory headlights, so a 7in LED item goes into the cowl for a classic look. All of which is then beautifully finished off with a windscreen made using rapid prototyping.

Now the Desmo had the Streetfigther look that Roland was after, he needed to create the rideability the surgeon required, without sacrificing the performance of the machine. This is no simple task as many would assume, an incredibly stiff chassis, firm suspension, and a tight steering angle mean things have to be properly designed. Here Roland’s racing background helps him tackle the job and an all-new upper triple clamp was machined that utilises a set of RSD’s own pullback risers. Into these slides a set of ProTaper bars and all of the switchgear, levers, and other Ducati goodness goes on. To complete the new riding position, a set of spacers was made to drop the rearsets a little and reduce the bend in the knee.

The RR is a complex machine in many ways and the electronics package is no different, so a new mount was fabricated to allow the standard dash to stay on the bike, while still affording room for the ECU, which can be switched out for the kit version if the bike sees the track, unlocking even more power. There is already 200bhp available with a twist of the wrist and that means tyres get cooked off quickly, so the funky 16in rear wheel is swapped for a 17in rim, still by Marchesini, offering a greater tire choice and for now that rubber is Dunlop Q4.

Sands has an incredible team around him, and together they’ve built the ultimate Italian canyon carver for a surgeon who refuses to let age slow him down and I have little doubt the Ducatisti will appreciate such passion.