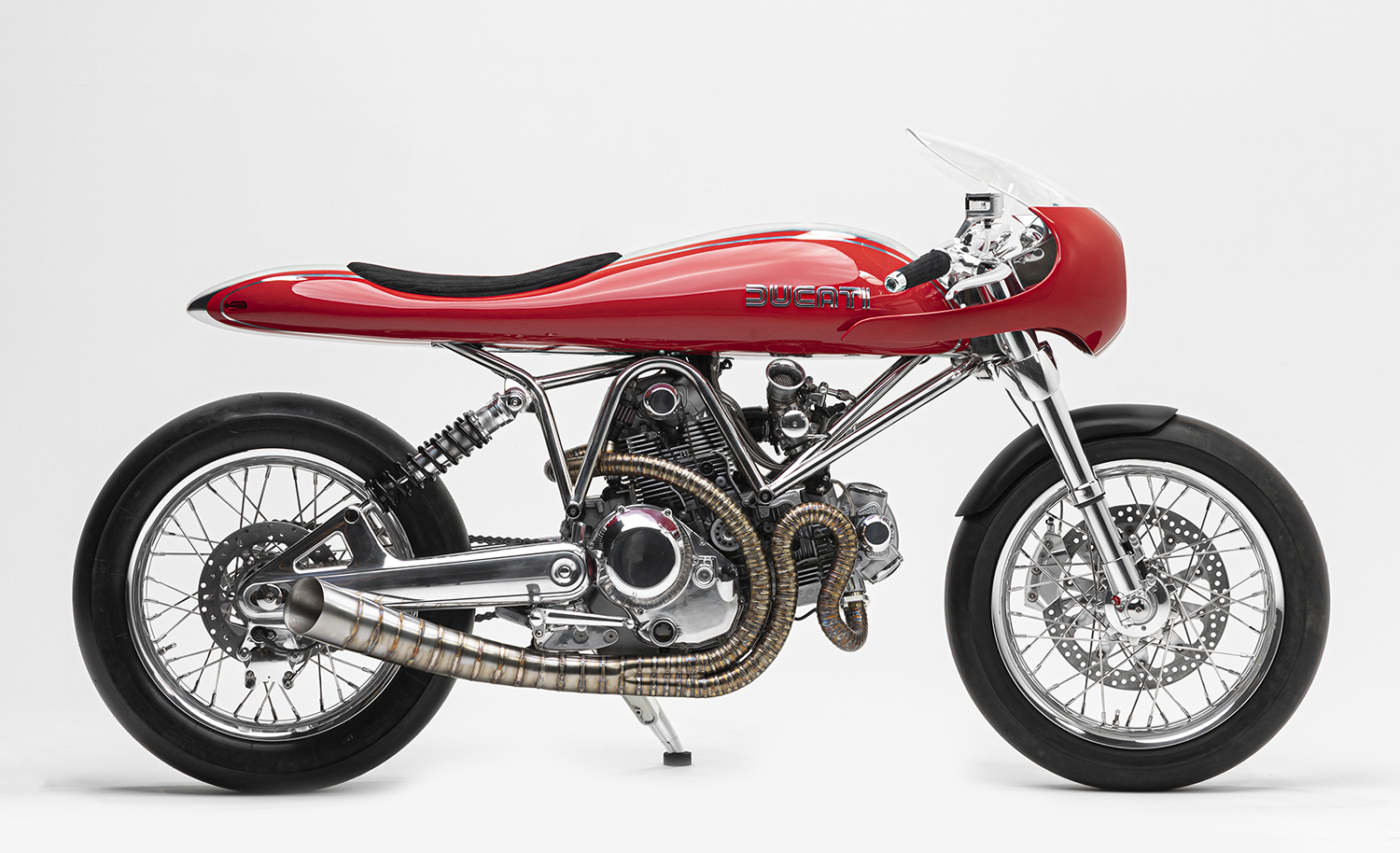 As the custom scene matures, we can step back and reflect upon the people, events, and philosophies that have brought us to where we are today. An important part of that journey has been the contribution of Alan Stulberg and his team at Revival Cycles, who have a dedication to absolute perfection that has always raised the bar. A custom motorcycle for the Austin-based outfit is not just a form of transport, ‘it is an aesthetic expression that demonstrates the beauty of purposeful form’. A motto that can now be placed as a by-line, as they reveal their magnum opus, a stunning culmination of seven long years. The badge might say Ducati, but this is exclusively a Revival designed and built masterpiece. Introducing… ‘Fuse’.

To understand this build, first, you must realise that it is as much about the process and the relationship with the builders and their client as it is the finished product. Ed Boyd has most recently been the Senior VP of Design for Dell before that, Nike and Sony. What he sought was a truly unique experience, “Revival delivered an opportunity to not only build a concept bike but rather welcomed me into their design house to collaborate on a fully 3D customisation that utilised both high tech and low tech to accomplish the end goal of an unparalleled machine.”

Clearly, he knew what he wanted, and wasn’t afraid to spend a large amount of money for the right people to work with; $US250,000 and only Revival Cycles would do! As Alan explains there are literally thousands of hours spent in CAD and the same number on the fabrication, “every part except the engine is bespoke – driven by computer model and hundreds of exacting sketches”. That engine is the glorious 1100 Ducati L-Twin and taking inspiration from their own J63 build, work on this 7-year long Homeric odyssey could begin.

Forming the foundation is the complete custom stainless steel trellis frame, designed to give the appearance of the body floating above the motorcycle. There might have been a temptation to utilise a single shock, Alan would have exacting reasons as to why he did not, and the twin shock design not only fits the classic styling but continues the theme of two; wheels, cylinders, upper rails, front forks and so on. The dual-sided swingarm is just as special, created in two halves that were machined from solid blocks of billet aluminium.

Moving to the front end and the tour de force continues, with one of the most incredible pieces we’ve ever seen crafted, full stop! “The only handlebars known to exist that are integrated into the top triple clamp with integrated brake clutch and throttle controls, hidden cables, and integrated hydraulic reservoirs and electric switchgear.” You simply have to drink it in, with the lower beefy triple clamp playing the perfect companion, all beautifully polished up. It is through these that a custom set of polished USD forks are dropped, with only the best internals by Ohlins.

“The 18” wheels were designed and built to spec to show the detail of the custom hub and spokes creating a visual lightness for the rims”, which are then wrapped ever so fittingly in a prototype set of slick tyres from Dunlop. The brakes as you would expect on such a build are bespoke, with the team working with Hayes engineers, who built the incredible smoothed and polished radially mounted caliper and other components to the exact design and specs that Revival supplied.

The bodywork is a beautiful monocoque design, it is speed standing still and flows like an effortless breath across the foundation that holds its form. There is a fuel cell underneath and the seat wrapped in Revival Limited leather sits on a support structure tied into the frame. The front fairing is completely hand-formed, and the finished product defies the blow of hammer and leather bag, such is the quality of the fabrication. Its opening houses an LED headlight that is held by a CNC’d carrying bezel, and there is even time for a party trick, with an auto-retracting kickstand.

The engine has a beautiful vintage look, but packs modern fuel-injected performance for 140bhp to propel the 400lb machine. This is achieved with the help of a 2 into 1 stainless steel exhaust with over 150ft of welded bead. Inside it’s been treated to a full rebuild, slipper clutch, and raced tuned ECU, with the velocity stacks and pulley covers more incredible work produced on the CNC.

A custom harness utilises a solid-state control unit with RFID wireless ignition switch, and Supernova turn signals neatly hidden away. The paint is seven loving layers of Ducati red and the custom gauge face sports the bike’s name. It’s more than a motorcycle, it’s a piece of art that would make the late great Bobby Haas smile from ear to ear, and after seven years of toil, this ‘Fuse’ is lit!