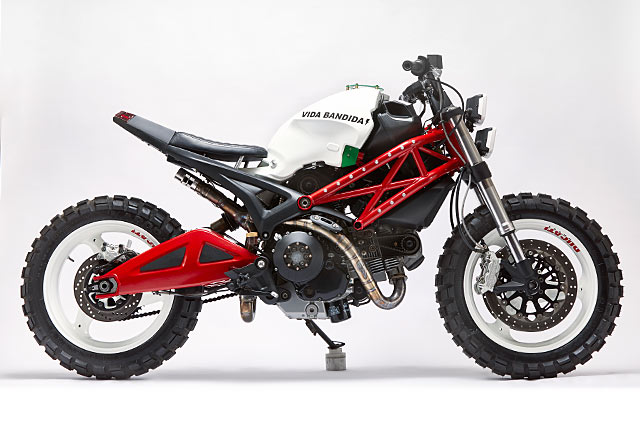 Yesterday we had an 80s endurance cafe racer and today it’s rally cars that are setting the scene. But not just any rally car; it’s arguably the rally car. The Lancia Stratos HF with its Ferrari V6. Argentina’s Vida Bandida are, like many of their country folk, huge rally fans. And to pay tribute to the Lancia and rally’s Group B golden age of the 70s and 80s, they’ve built an perfectly Italian tribute in the form of this dirt-eating Ducati Monster. “I am one of the owners of Vida Bandida motorcycles,” says Argentinian wrenchman Tocho. “Together with my partner Salvador, we have dedicated ourselves to the customising of motorcycles in Córdoba. For three years we’ve worked in the same garage, doing almost all the work. We also have a clothing and accessories line, which we are expanding. We make all kinds of motorcycles and this year we had several interesting projects, including an R nineT… and now this one.” It seems that fate may have also played a hand in the creation of the bike. “It’s a 2013 Ducati monster 696. I bought it from a friend of a friend, and it just so happens that his father is a famous rally driver”. So naturally, Tocho got to thinking… Córdoba is a city well-known for its passion for rally. As kids, Salvador and I would always go and see the WRC races in the Córdoba hills. We still remember seeing those thoroughbred cars fly through the air and somehow avoid crashing at every bend. It was the Golden Age of rally with the famous Group B cars of the 70s and 80s without too much  electronic intervention. That’s where the inspiration for this bike comes from. Specifically, the Lancia Stratos rally car. That’s why we wanted to make a rally-influenced motorbike; something that was on the limit and that would really take courage to ride at ten tenths”.

With heads full of Lancia’s Tricolore livery and some big old Hella spotlights, the boys began stripping factory parts to make sure the bike’s trellis frame and engine looked their best. Of course, this in turn revealed the bike’s half tank and airbox. While the bare-bones look was perfect for the theme, its unfinished state wasn’t. Bring on the red, white and green. Next came some knobby tires which were mounted onto the now white Ducati rims. “We left the famous red trellis frame intact and with its original color, but we add some turned aluminum tips to reference tire spikes and to add a little aggression to the bike’s look. We also made a window in the clutch and revealed the motor’s belts to add more race looks. Retaining the factory rear subframe, they constructed a seat and tail section that pays fastidious homage to Italian automotive design of the 70s and 80s. Lancia Sibilo, anybody?

Tocho claims the tail section as being the build’s biggest challenge. Note the seat’s ‘flying’ stance and the way the frame, tail and brake lights all work in harmony. The cherry on the cake is the exhausts with their four-sided tip finish, making for a very aggressive, asymmetrical look from both the sides and the rear. Look even closer and you’ll see just how much thought the bike’s lines have been given. The red swingarm in conjunction with the trellis creates a powerful ‘swoosh’ from top to bottom. It’s blacked-out recesses also nicely complement the trellis’ negative spaces, too. Slapped together, this thing ain’t.

[superquote]“Look even closer and you’ll see just how much thought the bike’s lines have been given”.[/superquote] “It is the first time we’ve made a bike with so many colours,” says Tocho in closing. “We liked that because it was a real challenge to pull off. We also liked the simplicity of the bike in terms of leaving it free of plastics and other unnecessary parts. Now it shows the essence of machine and man; it’s the perfect representation of our childhood dreams. Full of flying racers with nothing but air beneath them and fire in their exhausts”.