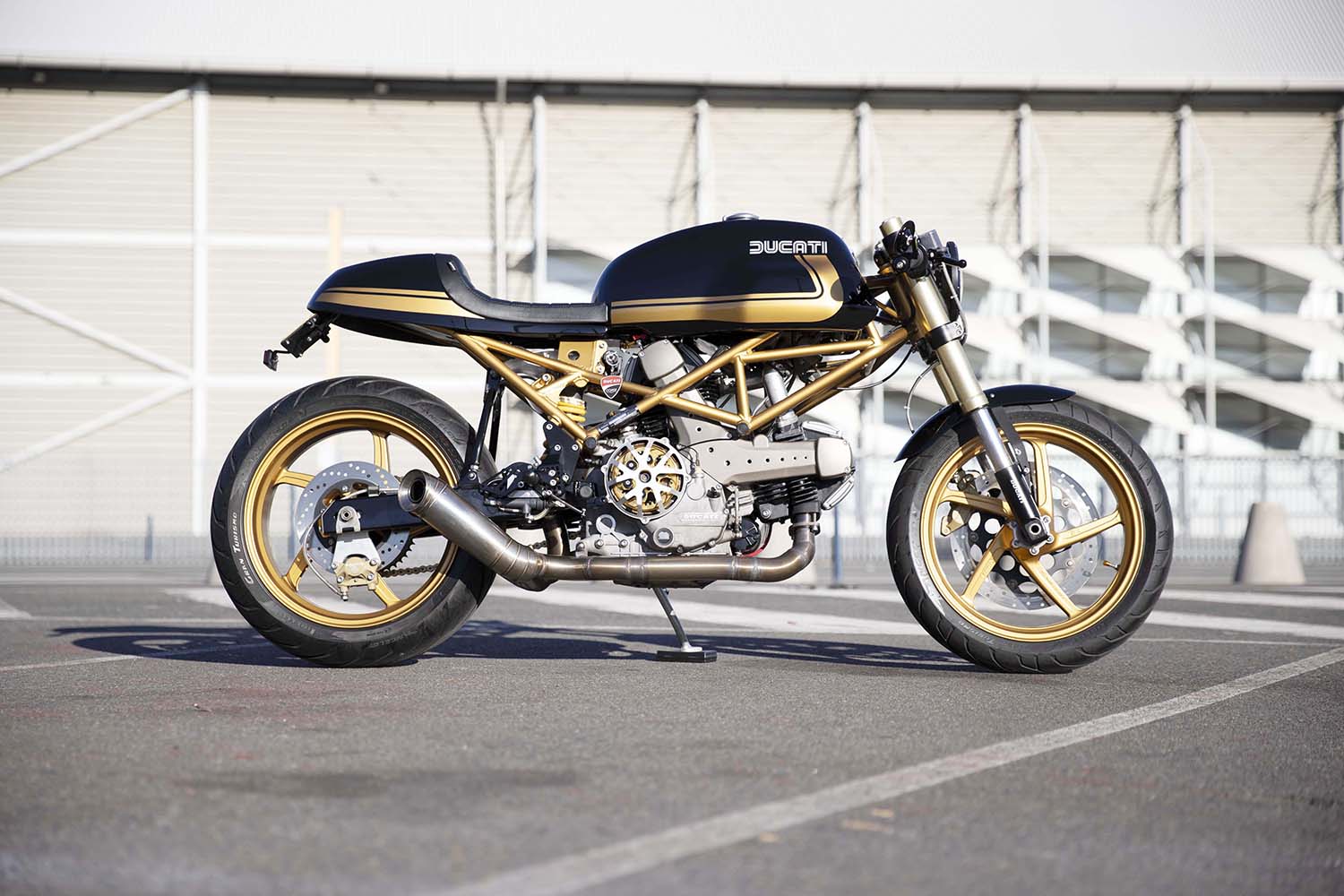 The Chinese Philosopher Lao Tzu is perhaps one of the wisest men to have ever lived, delivering clear advice by which to live. And his statement that “he who does not trust enough, will not be trusted,” perhaps best encompasses the relationship that has resulted in this stunning custom machine before you. Simon the bike’s owner sent a 2000 Ducati 916 from his home in Sydney, Australia, up to Brisbane in the sunshine state. There it was met by Noel Muller, one of Australia’s most prolific builders, and the man behind Black Cycles. What he returned to Sydney’s Simon was a Ducati Monster that’s been given a sensational cafe racer rebirth.

Accompanying the incomplete 916, was a host of parts and pieces, that included a Redmax tank and tail kit. But there was a problem in Noel’s eyes, “I expressed my concern for fitment & actually using these parts on a water-cooled bike as it wouldn’t really gel! So, Simon very generously suggested we acquire an air-cooled Ducati, fit any parts possible that he’d supplied & build a cool custom.” Oh, and before you get too worried, the 916 is now in the making at Black Cycles too, and the bike is currently being fitted with a turbo.

With a 1998 Ducati Monster M600 frame having been purchased to go forward with the cafe racer project, Simon put his full trust in Noel and wouldn’t see even a single picture, until the finished piece was delivered to his home. The first step was to start modifying the frame to accept the tank and tail kit, and the rear has undergone a considerable chop and change to make it all work. Even with all of this done, the tail unit was also heavily modified and reshaped so that it would better suit the lines of the tank.

That tank oozes the kind of class you really only get from a classic shape and Noel used his considerable fabrication skills to make some minor changes to ensure that it was perfect and would mount on the frame in a way that wouldn’t restrict steering input. To give it an extra stunning touch, a strap runs over the front and there is a Monza filler cap for more of that Italian beauty. To complete the bodywork, a small blade like fender hovers over the front tyre and is attached with a custom set of mounts.

The minimalist aesthetic is maintained with a 7-inch LED headlight that is fitted almost flush, hard up against the forks between the trees. Now incredible colour scheme could be laid down and it was over to another Queensland institution, PopBang Classics, where Justin expertly sprayed the bike in a deep gloss black and gold-medal like hue. With the frame also getting hit with paint, and the wheels and forks sharing the gold look, it’s a master class in tying everything in together, from top to tail.

With all of this going on, it was decided a power upgrade be sought and the engine was swapped to the larger M900 variant. To keep things running smoothly, it has been completely rebuilt and the 38mm Mikuni carbs that fuel the fire have been overhauled as well. These engines like to breathe, so a generously sized custom exhaust is bolted into place and kicks out each side with a pair of stainless GP-styled mufflers that Simon had built in Melbourne. To give the motor the look it deserves, the belt covers have been drilled and the classic Ducati touch of an open dry clutch finishes it all out.

To put Simon in perfect control, Noel modified some custom rearsets to suit the build and fitted up some clip-ons too. “A hand-built seat was built to suit the modified tail & covered perfectly in retro-styled rib pattern by Adam at Carman’s Auto Trimmers.” The rolling stock will be familiar to the faithful Ducatisti, with the wheels being donated by the 916, before being wrapped up in some quality Pirelli rubber.

The suspension and brakes have been reworked, with the rear shock completely rebuilt, and the brakes and clutch treated to some new Hel Performance braided lines. Justin “also handled the majority of the wiring beautifully as well,” Noel tells us and every part coming off the new loom is top quality. There is a Motogadget mini speedo, the same company’s m-buttons and ultra-trick glassless bar-end mirrors. While at the rear, the neat number plate bracket is kept uber clean with the use of a Kellermann Atto all-in-one micro package.

The stance, that beautiful body, and a sonata of dry clutch clatter on percussion, mixed in with an Italian L-Twin symphony, give an overwhelming sense of joy to the senses. And understandably, when Simon was finally surprised, he was absolutely thrilled and was able to turn up in style to Sydney’s Distinguished Gentleman’s Ride.