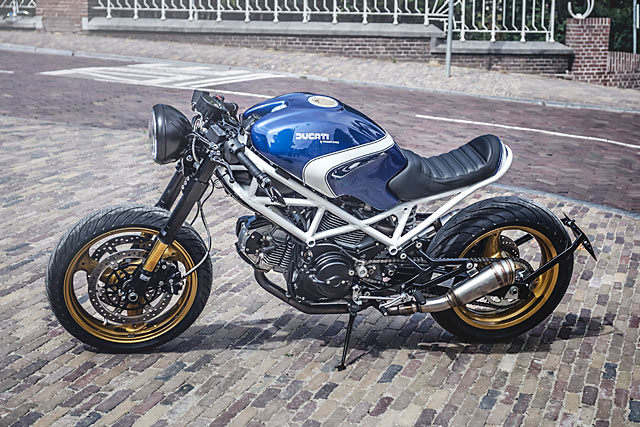 Giving you new custom bike a Mafia-related name requires a certain amount of bravado. After all, portraying something that’s got your life in its hands as a violent, vindictive and possibly unhinged criminal doesn’t bode so well for your future personal safety. Open the garage door one sunny Sunday to find it in a bad mood and you could well end up riding with the fishes. Luckily for us, the Netherlands‘ Wrench Kings are still healthy enough to tell us about this, their brand new Ducati Monster cafe they’ve named ‘Mobster’. “A few months ago Robbie stepped into our shop and asked us to build his dream Ducati Monster,” says the Wrench King’s Take. “He had started the build himself, but he wasn’t able to complete it due to a lack of time. So we kicked things off with the bike’s design. We asked Robbie exactly how his dream bike was going to look. After a few meetings with the Kings, Robbie gave us the thumbs up and we started the build”.

They started the Ducati build by stripping the bike to the bone. Just like a pro disposing of a dead body, all the parts were removed and the frame was cut to make things a little more manageable. “The rear of the frame was shortened and it got a new custom hoop, which really gave it a cleaner, more compact look”. “After finishing the rear frame, we started working on the custom seat pan. Because of the original factory ‘dents’ in the tank, we had to come up with a design for the seat pan that would cover this up, or at least work with it. It was a hell of a job but we think it turned out pretty well”. The new custom-made rear end was fitted to the frame and a whole host of fresh custom parts were added, including some tasty Motogadget bar-ends and a set of Italian G&G cans. “Once the fitment was perfect, we started to disassemble everything and made the frame, tank and any other soon-to-be-painted parts sandblast ready. After blasting they were cleaned, painted and topped off with a shiny new 2-pack clear coat”. The front fork was sent to local shock shop HK suspension for a complete overhaul and the ECU went to Carmo Electronics in Helmond to be re-mapped. The beautiful leatherwork on the seat and grips was done by Miller Kustom Upholstery while the Kings started refurbishing the wiring loom for a cleaner, neater look. “The hardest part of the build was definitely the Ducati’s electronics. We removed the original gauges and replaced them with an Acewell unit, but there was a catch. When you change the gauges like this, the bike won’t start due to the mapping of the ECU”. When the problem came up, Take and the team thought that they had made some mistakes when re-wiring the loom. Fast forward though a whole bunch of time, phone calls, blood, sweat and some tears before they found out that the problem was actually in the ECU. “After we found out and re-mapped it, the guys from Carmo decided to pay us back in kind by giving the bike a few extra horses”. They sound like real keepers. “The Mobster came out pretty well, we think. By cutting the frame and making the rear more compact, we made an original bike no one has ever seen before. The color scheme of the bike is from the old school Duc’s and gives it an authentic look. The leather work looks great with the blue paint and the new parts are all top-shelf quality, making it a bike we’re happy to put our name on”. “And what makes this Ducati the best?” Take asks. “Riding it. It’s really been transformed and we’d put money on the fact that it will give most bikers one hell of a big smile on their faces”.