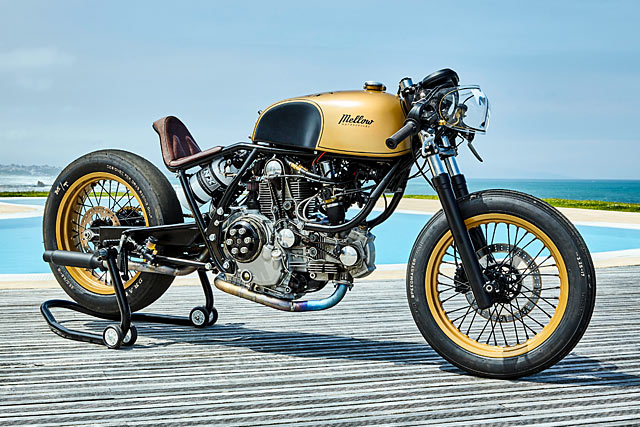 Mellow Motorcycles are anything but. They don’t do partial restorations or touch ups and they’re refreshingly forward about charging a premium for the work they do. Work which is consistently clean and clearly belies the name they’ve given themselves. And nowhere is their dedication and incredible craftsmanship more apparent than on their latest bike, a Ducati-Honda sprint racer named FRKNSTN that to my eyes is FCKNFNTSTC. FRKNSTN was built for a singular purpose – to tackle the pan European Sultans of Sprint race series. Regular readers of Pipeburn (and you’re all regular readers, right?) will be familiar with the insanity. But if you’re late to the party here’s a rundown: The Sultans of Sprint is a series of short distance drag races across Europe, where points are awarded for not only winning the sprint, but for having the best looking bike, coming closest to binning it and drinking the most. So the team, mad bunch of Germans that they are, decided to have a shot at the 2017 series. Sultans of Sprint is only open to air-cooled twins, and the line up features all kinds of Japanese, and German entries. Like a few competitors, Mellow went the Italian route, as CEO Flo Hubert explains. ‘The engine is a Ducati 1000cc engine from an 2004 Ducati Multistrada,’ he says. ‘We modified the air intakes, the gear box (only 4 gears left for lighter weight), polished all the intakes and funnels inside the engine, installed forged pistons, upgraded the ECU, mounted titanium headers and a CNC machined clutch cover for lighter weight.’ Phew.

That great throbbing mass of Italian passion (er…) was mated to a 1977 Honda CB750 frame. And as you can imagine, there’s no small amount of work switching from a trellis frame to one from a traditional Honda four. In part they said they did it for a challenge, and partially because ‘at Mellow, a stock frame is just not what we’re about’. Not keen on doing things the easy way a KTM 640 swingarm was also fitted, and the footpeg and seat position aligned to get the rider, Amir Brajan, in a drag racer crawl. [superquote]“And as you can imagine, there’s no small amount of work switching from a trellis frame to one from a traditional Honda four”.[/superquote]

FRKNSTN was only finished on the eve of the first Sultans of Sprint race, with a nacelle made from a Bell Bullitt (Bell sponsored their ride) and some gorgeous paint laid down by local whiz Kat von Zett. Fuelled by only two hours of sleep the team packed up and drove 12 hours to Monza. It was a busy day. ‘The only test run we had was the two hundred meters of road to the weigh station,’ Flo says, ‘which was 147 kilograms fuelled and oiled. Not bad for an old lady’. If my old lady dropped her weight to 147 kilograms I’d be pleased too. But the team, despite the rush to the first meet managed to take out the ‘Rookie’ class. ‘Happy faces were everywhere!’ Flo recalls, ‘Well, except for our opponents faces’. Team mates and good fortune would smile on Mellow Motorcycles again, with the team taking a 2nd in Paris, despite having a failure in the NOS system.

The final sprint round had the team with a home ground advantage – held at Glemseck 101 in Stuttgart the track was only forty kilometers away. They found themselves facing off with another local’s bike – Schlachtwerk’s Yamaha TR1. After the smoke cleared the result was evident – the guys from Mellow had won! Mellow Motorcycles have managed to produce a winner with the FRKNSTN Ducati, a build that not only won them a race series but earned them plenty of new friends. ‘All the guys and girls at Sultans are crazy petrol heads,’ Flo says, ‘we had crazy levels of beer and wine consumption after each race meet. We never missed a chance to drink and talk until the next morning. That’s a big part of Sultans and a big part of racing with friends’.