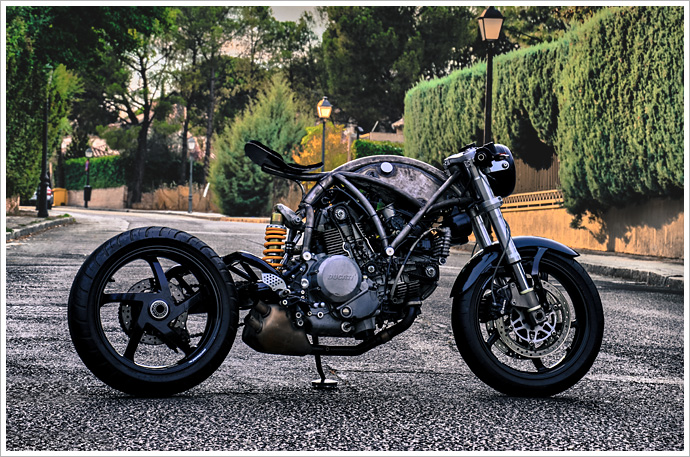 What’s the opposite of a motorcycle? Have a think about it. Bikes are small, nimble, rebellious, noisy, spiritual and exciting. Now think of something monolithically large, very conservative, whisper quiet, painfully intellectual and about as exciting as a book by Martin Heidegger. That’s right, i’m talking about Universities. Naturally, you’d think that the two would have absolutely nothing in common. But you’d be wrong. The bike you see before you exists because of a university. Namely, Madrid’s Instituto Católico de Artes e Industrias, which accepted a request from one of its students to build a bike for a final year project. That student was Manuel Ayllón, and the bike is probably the most amazing Ducati you’ll see all year. “My name is Manuel Ayllón and I’m 23 years old. This past June I managed to graduate as Mechanical Engineer from ICAI in Madrid, which is one of Spain’s most prestigious engineerign universities. Right now, like many other graduates, I’m looking for a job abroad without anything too specific in mind, at least in something related to engineering. I basically want to move away from home and discover as much of the world as I can before having to settle down.

I have been passionate about cars and motorcycles since I can remember and that is the reason why I chose mechanical engineering and the reason this bike now exists. We are asked to do an engineering project during our last year and I had the idea of designing and building a motorcycle. The university accepted the idea and it was up to me to make it happen so I started asking literally everywhere I knew related to motorcycles for help, from Yamaha or Ducati and even small builders I found featured in your site.” “Finally, a mechanic from Roland Sands pointed me to Todd Silicato, owner of Todd’s Cycle, formerly in Huntington Beach and currently located in Hawaii. He agreed to help me with the project without charging me, so I flew over there the summer of 2012 with the bike modeled in 3D on my computer.

I bought the cheapest single-sided Ducati Monster I could find. With the help of everyone at Todd’s Cycle, who managed to answer all my questions and Todd’s friend Anthony Keeling, owner of Chassis Design Co. in Riverside, California, I completed the bike just in time and shipped it to Spain in boxes. I had some basic knowledge about fabrication that I was taught in university and I learnt a lot more. I have to say that both of these companies work to an extremely high standard with every single product; I was very impressed with the quality and effort they put into everything they were doing while I was there.” “The idea behind the project is to ask the question, ‘why are bikes so heavy and complicated when it is not strictly necessary?’ Using the same ingredients as the original bike: power plant, suspension and swing arm and by using only a minimalism structure to keep everything together, I wanted to end up with a different motorcycle, one that was faster and more enjoyable to ride.

The new bike weighs 155kg with a full tank of gas versus the 195kg it did originally. It’s true that the fuel range has decreased considerably and the seat could be softer, but I have ended up with a bike that easily outperforms the original bike in any road and conceptually, I consider I have succeeded in making my point about unnecessary elements in current motorcycles.” “My future plans for this bike are to paint it and upgrade everything on it to new or better with a proper budget since it is a little rough around the edges. At the same time, I will definitely continue to build bikes with conceptual ideas like this one for myself.

After all of this, I have learnt a lot more about motorcycles and how to build them. Specifically, I have learnt the importance of sharing your passion with others without worring too much about money. Todd, Anthony and their staff clearly are an inspiration to me, as I found two very good people really passionate about what they do and who taught me a very valuable lesson by being willing to share and help other people with the same passion that made their dreams come true.” “Oh, the name of the bike is Duc Soup, which Todd jokingly suggested to me as a mix of DUCati and soup, as I was always adding a little something here or there.” Like what you’ve learned so far? Then why not check out a walk-around and start-up video of the bike here.