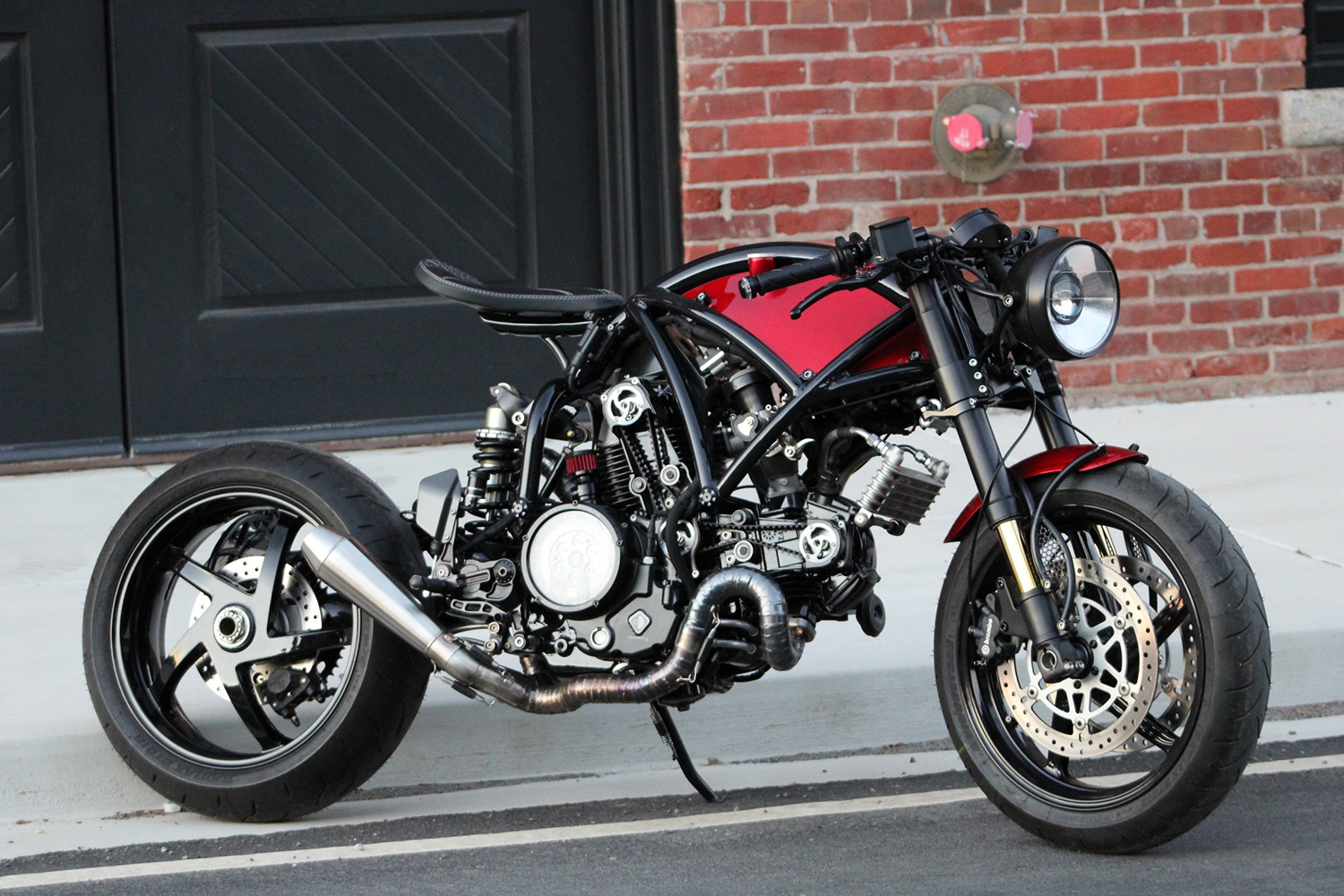 For thousands of us who own and craft custom bikes to various degrees, for the first attempt, we tend to buy a bike and then start to add bits and pieces. Along the way, you discover you need to learn a new skill to make a part fit, and ultimately that first build is a bit of a patchwork learning experience rather than a comprehensive creation. Not so for one Brent Smedley, he literally spent years of his life studying and learning everything about bikes, metal fabrication, and design, before delving into a Ducati build. And boy has it paid off, with his incredible creation ‘Antevasin’ a total reimagining of the already epic 2006 Ducati S2R 800.

The name of the build is perhaps the most fitting we’ve ever seen to describe both bike and builder. Antevasin means, ‘one who lives at the border.’ In ancient times this was a literal description. It indicated a person who had left the bustling center of worldly life to go live at the edge of the forest where the spiritual masters dwelled. Working in sports medicine, Brent’s journey started back in 2012 when he knew he wanted to build a custom inspired by what he’d seen across the internet and his devotion to the task commenced.

But it wouldn’t be until 2017 that he found the low milage S2R to serve as the basis for his build. Meaning by the time work commenced in 2018, he’d learned more than most will ever be able to cram into their brains and had a deep sense of the design he wished to bring to life. And it started by taking the perfectly good Ducati and cutting the frame all the way back to the headstock. From here Brent could show off his newly learned fabrication skills and build an exoskeleton-like frame, that still utilises the engine as a stressed member, but does it in a completely unique way.

All of which was done on a custom-built jig, to the highest of standards, with the large diamtere backbone one of the true highlights of the build; its acute radius is something that is rarely seen on any motorcycle chassis. Which meant that fitting the stock tank would be like putting a round peg through a square hole. So with great satisfaction upon its completetion, Brent set about turning flat sheets of flat 18G steel into a one-off gas tank that utilises the stock Ducati fuel pump and lives inside the frame.

Keeping the unique looking floating rearwards, a small seat post acts as the subframe and allows the solo unit to hover above the centre of the bike. The seat base was covered by the good folks at Sinister Seats using a mix of Alcantara and leather for a high-end finish. All of which allows the Ducati single-sided swingarm and real mechanical nature of the rear shock assembly to be shown off in all its glory. The front suspension however has come in for a change, with Speedymoto triple clamps securing a set of very nice Ducati S4R forks.

The Ducati L-twin engine remains largely stock internally, but once again it would allow Brent the perfect opportunity to test out his newly acquired skills. And nothing will test the patience of any new builder like TIG welding a stainless steel exhaust, especially one that’s not exactly straight forward. But the look, the welds themselves, and the sound all make the blood, sweat, and tears worth it in the end. The engine also gets a Microtec computer, Ducabike clear clutch cover kit to expose more menacing mechanicals, and a Revival spark plug wire kit.

Brent also fabricated the battery mount and housing for all of the new electronics, which has been stuffed full with a Revival mo.Unit wiring harness kit. Before telling the guys at Revival to basically ship him the entire Motogadget catalog, with the premium products used across the build for everything from lighting to the Motoscope Pro Gauge that supplies all the information you could ever need. But it’s not long before Brent is getting creative again, this time on the throttle “ the custom stainless linkage, includes using an old exhaust rocker as the choke lever.”

To take full control over his crazy contraption, Brent opted for only the best with Driven riser clip-ons and adjustable levers by CRG. The rearsets are custom builds for the bike and all the braking comes via Goodridge lines built off Revival kits. Then having crafted such a masterpiece, picking the final colour scheme is no easy task. Too over the top and you take away from the fabrication work, not good enough and it fails the entire build. But having thought about it for years, the black with a stunning red from Roth Metal Flake, literally lays down the finishing touch on this final thesis in one incredible learning journey.