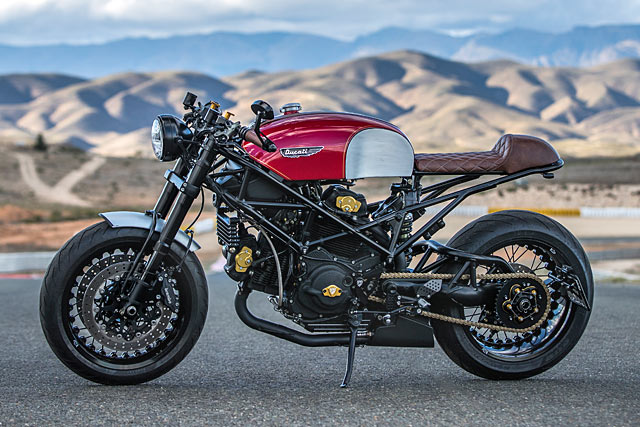 Pipeburn is full of stories concerning engineering genii who make us all look like drunken monkeys when it comes to customising a bike. Guilty as charged. But for the most part, it’s average Joes and Joannes who build bikes. The trick is knowing when to bring in the big guns. Clearly not one to do things by half measures, Switzerland’s Michael Thalmann pulled the pin on European custom’s equivalent of a nuclear weapon to help him out and the end result is a Ducati Monster cafe racer that’s blowing our minds.

“I’ve been a Ducatista since I was allowed to ride a bike,” says Mike, smiling. “I spent a long time riding a 748, which I eventually replaced with a Panigale when it came out… and once I had the money for it. Joining a group of Ducati track enthusiasts, I became friends with the owner of Swiss bike dealership Ducati Zentralschweiz whom I approached with the idea of creating a cafe racer. He and his mechanic Nadia created the legendary Blue Shark Panigale R. I have a background in electronics, so I planned to do all the wiring and ECU”. Mike’s base was a 2006 Ducati Monster S2R 1000. The owner of a car garage in Zurich replaced it a while ago and was more than happy to sell it to him. It was a lucky find, but Mike points out that the bike really needed some attention before it was going to pass muster. “I was inspired by a friend of mine who brought an absolutely stunning Cafe Racer to the World Ducati Week last summer. Her bike is similar in as much as it was built on a Ducati S2R 1000. Once I’d seen that, it was on. Zentralschweiz’s Nadia completely disassembled the bike including the engine, which was cleaned and covered with heat-resistant wrinkle paint to give it a deep black look with a little texture”. The team then cut the tail off the bike and added a new rear loop to mount the custom seat on. Next came a handmade aluminium tank to make the bike slimmer and more classic. Before painting, they brushed the tank to add a subtle underlying texture to the cherry red hue. All the rest of the bike’s parts were then painted in jet black, including the spring of the rear shock and the entirety of the front shocks. “I added the spoked wheels from Kineo. The blinkers from Kellermann and Rizoma make sure everything is still street legal here in Switzerland. And with the exception of the open clutch cover, it is. I’ve also shortened and simplified all the wiring, and added the famous Motogadget controls as well as the display. The lithium battery, rectifier and a Motogadget control unit were placed under the seat”.

During the final assembly stage, the team added a CNC racing slipper-clutch, Rizoma belt covers, a black ceramic-coated QD Box Exhaust and a sweet cafe racer-style headlight. “Being a team, we took ages choosing the color scheme for the bike; especially the tank. Finally we agreed on an Alfa Romeo 4C red, but in an opaque mix to have the brushed aluminium underneath reflect the light”. “It was tough finding a team of specialists who were willing to go the extra mile. The mechanic Nadia who spent countless hours on the bike, the painter Pietro and the leather worker Toni who all had the passion and patience to create something beautiful. That’s rare, and I can’t thank them enough“.

Mike’s favourite part of the bike? No prizes for guessing that it’s the tank. “It was created to define the width of the body and the seat, but the way it completes the bike’s shape is perfect in my eyes. And the red of the tank, with it’s underlying brushed metal texture, turned out absolutely gorgeous”.