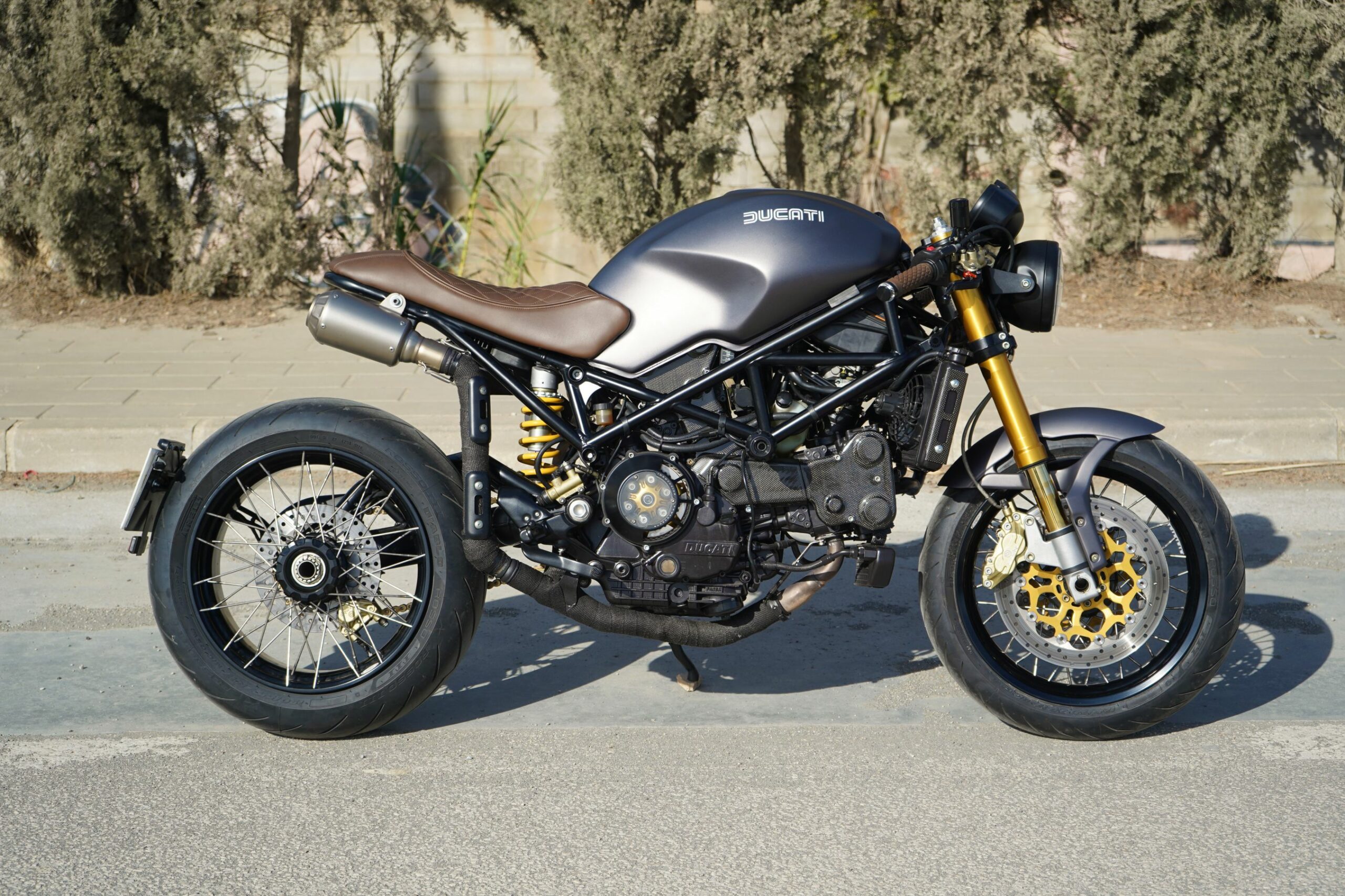 It was while researching for a recent article that I came across a motoring journalist who had some not-so-kind things to say about cafe racers. It was misplaced negativity no doubt, but it did get me wondering, what might a ton-up boys’ bike look like if one of those young lads from the ’60s was thrown into a time machine and landed in 2022. Well, it was only a few days later that the custom bike gods gave me their answer, with the arrival of an all-new build from Spain’s well known workshop, Lord Drake Kustoms. Starting with a reasonably priced factory weapon, the team have taken a 2004 Ducati S4R and given it the full cafe flavour, with no unnecessary sugar, she’s already sweet enough.

What is often forgotten about those early of guys pushing the limits around London’s ring roads, is they weren’t exactly flush with cash. These were young working men with a few extra pounds and a need for speed, so in the early days, the bikes were often more than a few years old and the modifications done on a budget. The image of it all being BSA Gold Stars and custom crafted Tritons from day one is a myth, those machines would come later, but for the average London lad it was picking up the best bike you could find and then doing the tried and true modifications to create a young man’s dream.

It was with all of this in mind that Lord Drake’s head honcho, Francisco Ali Manen, dreamed up a build that got back to the simple essence of it all. “The idea was to make a Ducati café racer in the purest classic style, but with an air that combined the style of café racer motorcycles with more modern and sporty airs.” On the hunt for a donor and with their prices becoming very reasonable, the S4R makes a whole lot of sense. The ultimate Monster packs a superbike engine into a sweet handling chassis, that comes factory fitted with all of the fruit.

Stripping the bike down, the Malaga-based outfit, which also has a shop in Miami, saw significant improvements from doing some basic modifications to the rear end. The tail assembly on the S4R was always a bit of a mess, with big indicators, a bare black plastic fender and a huge number plate holder. These could all be tossed aside, and not wanting to retain the stock cowling, the factory subframe was cut back and a simple rear hoop welded in. Now with less weight and looking infinitely tidier, a number plate holder was fabricated to match the swingarm and is side-mounted.

Two of the most popular modifications from all those years ago were next on the list for Fran and the team, as they took care of the seat and bars. With custom mounts built into the new subframe, a single seat goes over the top with the classic hump look finished in a timeless leather hue with ultra-neat diamond stitching. Up front and the factory flat bars come off the top yoke and in their place go a set of clip-ons, mounted at just the right angle to ensure good steering clearance. Seat matching grips get slid on and the guys machined a custom LDK blanking plate for the top tree.

To get the ultra neat finish they were after, it was now time to pull the bike apart again and get all of the colours right. The frame, that beautiful single-sided swingarm, triple clamps and associated pieces were sent out to be powder coated in factory-like black finish.

The tank and the front fender are sprayed in a matte graphite grey with slick vintage Ducati graphics laid down in white, a nod to the era that was supplying the inspiration. The final touch of colour was to anodise the fork legs in gold to match the rear shock, brakes and master cylinders.

This build was always about keeping things simple and cost effective, but two things needed to be given the full-on treatment for Fran to be happy with his ‘Neo-Racer’. The first of which is the custom set of wheels made just for the job, that not only look trick but being lightweight improve performance too. They’re made up of aluminium rims that are laced to custom machined hubs in black with beefy stainless steel spokes. The second was giving the engine the modern look with carbon covers, making the classic Ducati sound with an all-new dry clutch and then letting that 996 superbike engine scream out of a custom exhaust with a MotoGP inspired muffler.

The finishing touches are all about improving the look and useability, and further weight saving was found by giving the bike an all-new loom. The lighting is a mix of LED, with a stylish headlight matched to a set of Motogadget m blaze turn signals on the end of the bars. Still at the controls and the Brembo master cylinders have been fitted with small, all black, machined fluid reservoirs and the levers are now adjustable to suit the rider.

Some all important frame sliders bolt in and the boys were ready to fire the thumping Duc into life and take it out to the ton. Not only does it do those speeds with ease but it would look perfectly at home outside a modern café, with a young Gen Z’er ready to join Boomer grandpa for a ride, and really, that’s what it’s all about.